This year, it seems the Dart Zone Max blasters are a better deal overall than the Dart Zone Pro line. After covering the Mk1.2 and the Mk2.1, the Dictator was a nice change of pace. After a bit of war testing (and a bit of accuracy testing at a weekend retreat with friends), I like this blaster even more. It’s a Conquest Pro, but with better ergonomics and a bit more mag compatibility than the previous iteration. It’s a step in the right direction, for sure.

After the Conquest Comes the Dictator 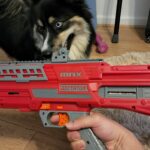 For some inexplicable reason, I have pictures of the Conquest Pro as well as war footage; somehow, I never wrote a review! That being said, the Conquest Pro was a fun (if stylistically different in playstyle) addition to the Adventure Force line. For Target, though, Dart Zone elected to make a larger blaster, with a regular pump grip and a full stock. It’s more plastic, and it retails at $50, but the contents justify the price.

The blaster comes with two 12-round magazines, as well as a snap-on connector. The idea here is that you can fire twelve darts, release the magazine, flip it around, and fire another 12. The magazine springs out relatively nicely during the reload, though more reliably so when the blaster is pointed up. The open space on either side of the magazine allows you to fully seat other magazines, as well (a solid stock would prevent this). Straight and curved Talon magazines work, as do the new 15-round Dart Zone Pro magazines. Some aftermarket magazines work even with extended bumpers for extra capacity. Out of Darts’ Tachi mags, however, just won’t fit (at least without some serious shell cutting). That magazine loading window is a good compromise between loading various magazines and user comfort. Not perfect, but good. 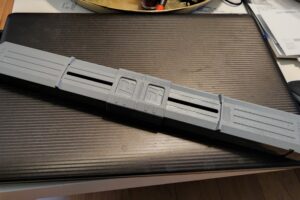 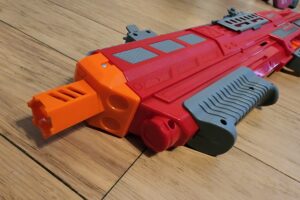 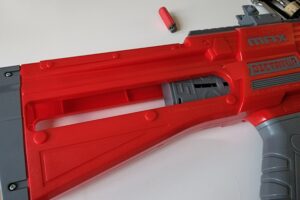 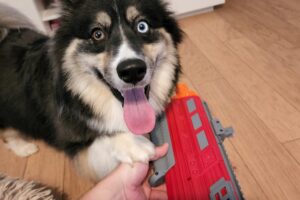 On the topic of comfort, the blaster sits against the shoulder quite nicely, and the giant Picatinny rail on top means you can put your sights anywhere. The Dictator comes with two iron sights by default, but you can use any attachments you like. The top of the stock is rather plain (with just some ridges), but it works as a basic cheek rest for aiming with the blaster.

The main grip feels great in hand, and the safety and mag release controls are within reach for adult hands. The pump grip, meanwhile, is a bit more traditional than that on the Conquest Pro. It’s still mounted to a Picatinny-like extension. however, so aftermarket solutions can be used if you prefer those. Even so, the included pump grip is, well, grippy! Even with wet hands, it’s easy to use. And when playing on hot, humid days, that becomes rather important. 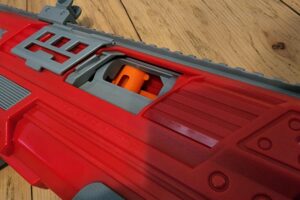 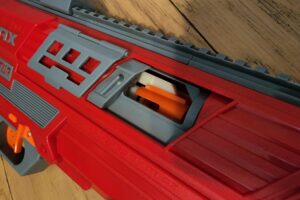 Unlike other blasters, you reload BEFORE you prime the blaster. In its rest state, the mechanism inside has the magazine isolated and the breech closed. Once you insert the magazine, then the magic can happen.

Priming does several things: it opens the breech, rotates the dart loading mechanism (to line up with the sideways magazine), and sets the dart loading tooth. On the return, it does all of these things in reverse; the tooth pushes a dart up, which then gets rotated and pushed into the barrel. Did I mention there’s also slam-fire? Yep, you can fire the blaster as fast as you can prime it if simply spamming darts is what you need to do.

The Dictator shoots as hard as other pro-level blasters, averaging 154fps with the included Max darts (and relatively little variance, at least when the darts are fresh). It also felt quite accurate compared to others, although at this point that’s strictly anecdotal.

With slam-fire, you can fire up to three darts per second; with the strong spring on hand, you do need some muscle to achieve that. Accuracy with slam-fire, of course, is less than that of aiming and firing a lone dart. But who doesn’t like flinging clouds of foam downwind?

I have yet to jam the Dictator, but there is a jam door for when that inevitably happens (if there’s a door, there’s at least a possibility).

The inside of the Dictator is similar to that of the Conquest, complete with a somewhat complex loading mechanism. When the blaster is primed and the pusher retracts, the orange transfer case rotates to the vertical, and the dart loading tooth drops down past the magazine. The plunger has an oval cross-section (a trend for Dart Zone as of late), but it seems to seal nicely. 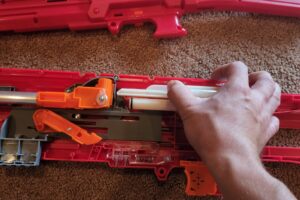 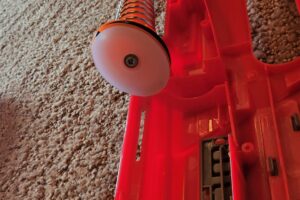 Note that there are several pieces of the blaster with screws on BOTH sides. Namely, the muzzle and the stock cap.

The Dictator is a fun, tactical blaster that keeps and improves the unique mechanism first used in the Conquest Pro. $50 is a reasonable price for a blaster this unique and powerful.