More than a few years ago, K’NEX entered the blaster market with the K-FORCE series. These consisted of blaster “cores” around which a blaster body was built, and it saw everything from single-shot pistols to revolvers to a semi-auto, magazine-fed blaster.

While the original line may have died, it’s been rebranded as Cyber-X. The same concepts apply, but perhaps with more focus on the building side of things, they’ll succeed. Because while $60 is very steep for a proprietary Stryfe-like blaster…it’s very reasonable for a 460-piece, motorized building set. 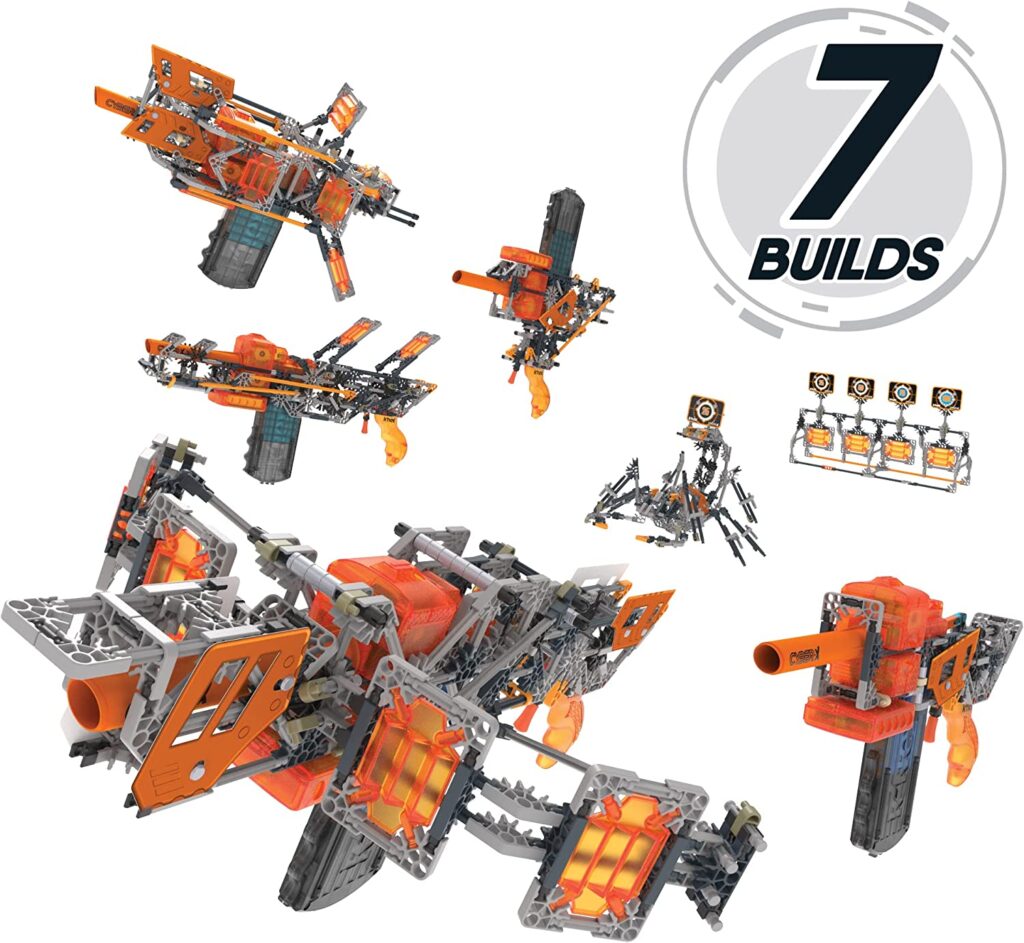 The C10 Crossover Legacy is, at its core, a large crossbow-shaped blaster. There are a LOT of pieces, so the time it takes to build will vary based on age and experience. For me, though, it took around 40 minutes to fully assemble the base model. If for some reason that’s not to your liking, online instructions exist for many alternate models. I still think the “main” build looks best, so I’ll stick with that.

Assembly, while time-consuming, is ultimately quite satisfying. The core of the blaster contains a magazine well, pusher, flywheel cage, barrel, and battery box (three AAs are required). Everything else is built around that, including the trigger. A K’NEX version of a rubber band serves to return the trigger and pusher after each use.

On the one hand, the model itself is quite sturdy, with several locking pieces that prevent any sort of catastrophic disassembly. On the other, some things are a bit annoying, like the trigger cap that seems to slide up and down. If there’s one thing that might need to be glued in place, that’s it. 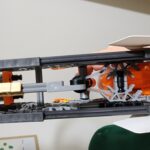 The blaster operates via an on/off switch, and there’s a safety switch that activates when a magazine is inserted. Sadly, just as before, these magazines aren’t compatible with Nerf-type mags. Admittedly, since the main focus is building, not battling, that can be somewhat overlooked. The magazines have a tight friction fit, so there’s no need for a magazine release.

The included darts are the same K’NEX waffles as before! I remember grabbing clearance packs of these for my early flywheel builds, due to their more consistent accuracy, and that hasn’t changed. There are better things out there now, but K’NEX can stick with what works!

On the blaster side of things, the three AAs manage to squeeze our 68fps dart velocities! Of course, some spin-up time is needed to achieve that, and rapid-fire will slow that down considerably. Speaking of rapid-fire, it’s possible to get three darts per second out of the Crossover Legacy.

There are extra targets you can make, should you desire to test your own accuracy!

The blaster core has plenty of screws holding it together, but once they’re out, the setup is easy to trace and understand. Both the on/off switch and the safety switch share a board, and a protrusion on the magazine pushes that safety into the closed position. 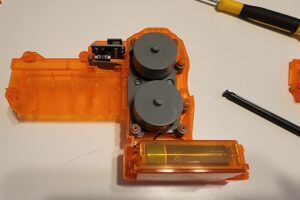 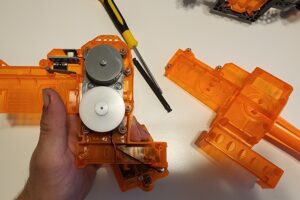 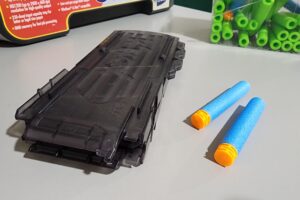 The flywheel casing is actually surprisingly roomy; I hadn’t looked at one of these for several years. Now, with a second look, there’s plenty of room for aftermarket flywheels if a replacement cage is ever made. Granted, I’m one of the few people that would do something silly like modifying a K’NEX blaster for war use…but it can be done! Whether I’m the one to make that cage depends on how much time I have.

$60 is expensive for a semi-auto blaster. For a motorized building set with extra play value, though, that’s quite a deal. There’s a reason that this got added to Toy Insider’s Holiday must-haves for older kids this year. Of course, with how many adults still collect and build K’NEX, Lego, and other various systems, kids aren’t the only people who will get this.

It was hard rating this, given the circumstances of having a blaster that, well, blasters second. Even so, if you’re a fan of building sets (and would enjoy the plinking that follows), then it’s hard to not recommend the C10 Crossover Legacy. And who knows – if I ever find my old K-Force magazines, I could try running this in HvZ sometime!