The Tornado has me conflicted. On the one hand, Buzz Bee tried something truly unique with this blaster, and the mechanism works. It’s appropriately sized for most hands, comfortable to hold, and even has a proper magazine release compared to older models. And yet, while I had fun using it, I have to acknowledge that it doesn’t live up to the box claims. It’s a blaster marked for ages 6 and up, yet the vast majority of target users won’t have the grip strength to achieve the advertised ranges and rate of fire. For most blaster fans, this will be a pass.

The first thing you notice on the blaster (especially in the packaging) is the train of large gears. The entire blaster is powered by squeezing your dominant hand, and that trigger pull translates into flywheel rotation. Mechanically speaking, if you want flywheels to move fast enough to fire the dart, you’ll need to trade something for the RPMs. In this case, you need a lot of force on the input side. 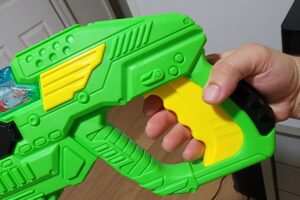 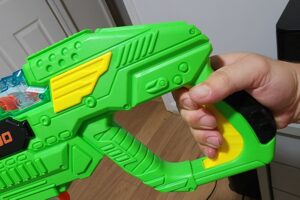 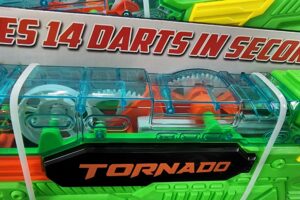 If you can do that, the gears do the rest. As an example: I can fully pull back the trigger in .25 seconds. This rotates the first gear once. With a final gear ratio of about 30.625, this translates to 7350rpm at the flywheels (which are much larger in diameter than standard flywheels). In theory, with a fast enough pull, you can reach standard dart blaster performance. 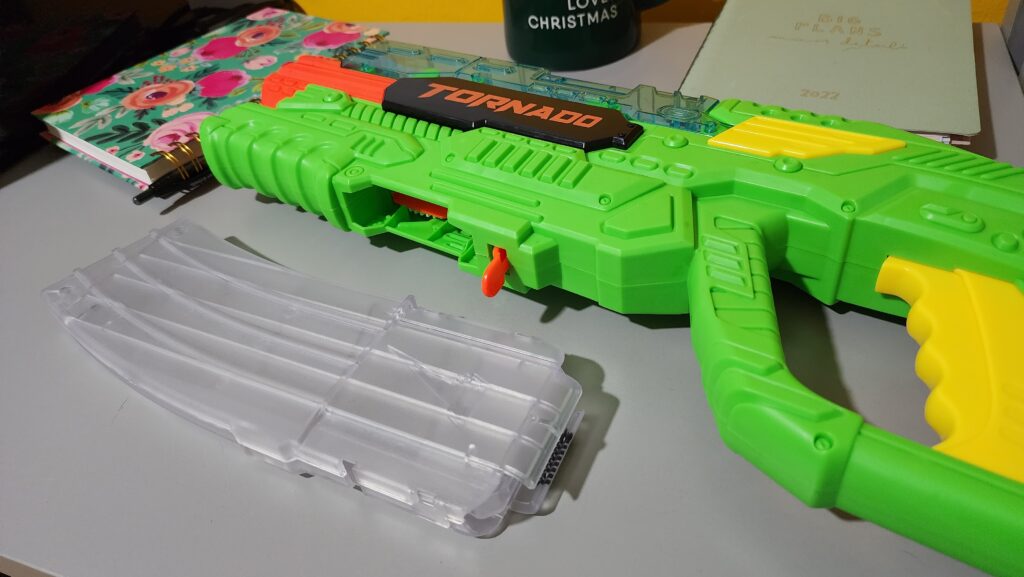 However, that description makes it sound easy. In reality, it’s a fairly flawed system for the target audience (children). Handing this off to children got the expected result: darts did fire, but they didn’t go far. There’s just no leverage, so to speak, so unless your hands are strong, you won’t get even okay speeds, let alone the ranges on the box. Mechanically speaking, the Tornado is like trying to open a door by pushing on it two inches away from the hinge, whereas the Nerf Revreaper was pushing much closer to the door handle (moving the handle gave a lot more leverage).

To its credit, the Tornado does a few things right. The main handle itself is adult-sized, and the front grip is comfortable. However, you have to lightly hold it, because a tight grip makes the shell rub against the gears, diminishing those already suspect returns. Also, the clear banana magazine looks cool, and a proper magazine release tab is finally here! It’s just a shame it had to make its debut on a blaster like this.

With the included Long Distance Darts, I wasn’t able to hit 90ft ranges, and it wasn’t for lack of trying. In fact, pulling hard on the trigger only got me average dart velocities of 61fps! A stronger hand might be able to do better, but at that point, who is Buzz Bee even marketing this thing to?

Meanwhile, I could manage to put out three darts per second on the best attempts. Nevertheless, your mileage may vary, and you’ll need plenty of lead time for aiming while you power up the blaster.

Of course, not being an ideal blaster won’t stop me from trying (and somehow succeeding) in doing silly things with it at a war. THIS THING IS LOUD!

Peeking inside, we see an interesting mechanism. Of course, getting there in the first place is a bit abnormal. Almost all of the screws are on the wrong side of the blaster (i.e. if this side is up during disassembly, everything will fall out). After removing all of those, flip the blaster over and pop off the nameplate. There’s one last screw to remove. 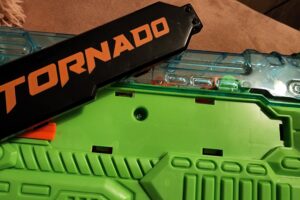 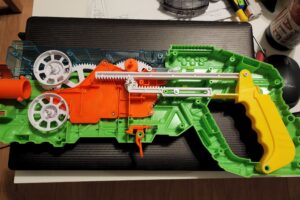 The trigger pull spins a small gear, sharing an axle with a much more massive gear. There are two of these gear pairs in the system, and both are needed to step up the RPMs enough to matter. One of the pinion gears, however, is mounted in a small channel, attached to a weak spring. This is the clutch mechanism! When revving the blaster, that gear is forced upwards into place and transmits motion down the line. Once you stop pulling, it drops down, letting the flywheels continue to rotate.

I had fun using the blaster, and will use it in HvZ games for the silly factor. But outside of strange people like me, is there a use for this blaster? Not really. Only the strongest hands can actually match the range claims on the box, or get a high enough rate of fire to matter up close. Kids are better off getting virtually any other blaster for that $25 price tag. With anything else, they’ll at least be able to prime, aim, and fire blasters with acceptable performance.