Sometimes, the simple things work best, which is especially true of the Buzz Bee Air Warriors Recurve Bow. $10 gets you a pullback blaster with ammo storage and decent performance. It’s not anything that will the local Nerf war. But it is fun to use, and good for the little Legolas in your life. 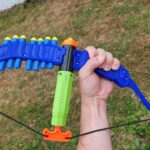 There’s honestly not much to write about a blaster like this, so I’ll keep the review short.

The Recurve Bow, once out of the box, unfolds to full length (it can fold back up for storage). One hand goes on the lower grip, the other pulls back the plunger rod priming handle. Aim the bow, release the plunger, and your dart fires. That’s it!

The blaster is decently comfortable. It won’t win any awards in that regard, but the handle is at least big enough for children and some adults. Having storage for seven darts above the barrel is very handy for reloading. And the priming handle is wide enough for you to prime the blaster with two fingers. 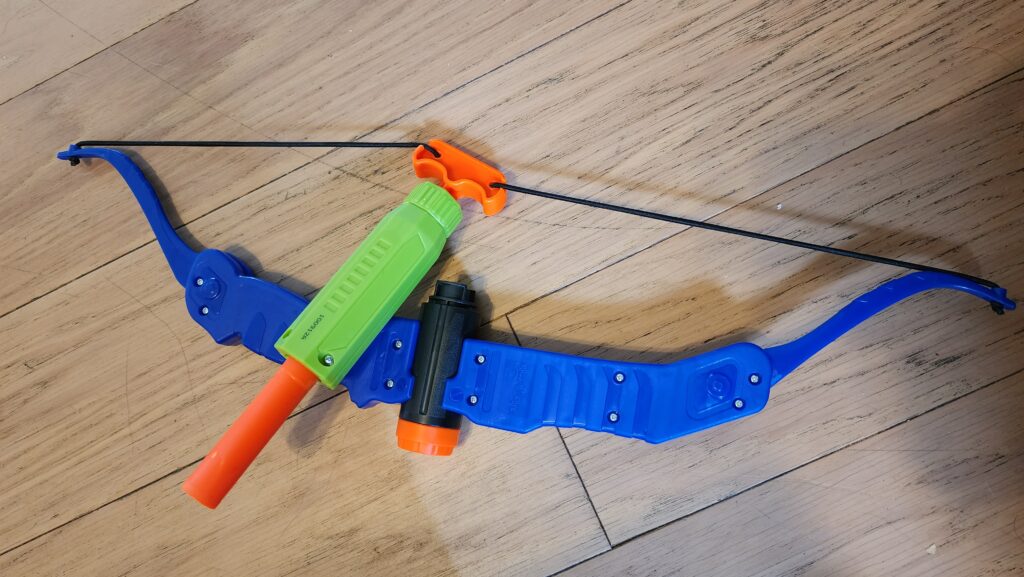 Aiming, of course, is purely a matter of practice with this style of blaster. At first, I was pulling up and to the right, but after firing a few times could aim straight,

Performance is actually pretty decent, with a full release getting 70fps! Using the included darts, I was clearing my back fence easily with angled shots, so the 80′ range claim is perhaps an underestimate. The rate of fire, naturally, will suffer a bit, but one dart per two seconds is feasible.

As far as the internals are concerned…I’m not worried about opening it up fully. We know how it works, and the rear cap is solvent-welded in place. You could epoxy or solvent weld it back in place after swapping a spring, but it’s a small bow. I just want to run it in an HvZ game in the future!

The Recurve Bow was worth the $10 I spent. It’s fun to use, reasonably sized, and frankly kinda adorable.