Hyper, admittedly, is better when you have ammo to spare. In that sense, the Hyper Evolve 100 is a step in the right direction. It not only holds 100 rounds of ammo, but it also can be quickly refilled thanks to large hopper doors. Even so, and in spite of measures meant to improve ammo feeding, the Evolve isn’t going to be my favorite blaster for various games going forward.

It’s good. But it’s not great. Seems to be the theme for Hyper, doesn’t it?

One notable feature on the Evolve 100 is the inclusion of large hopper doors, along with an ambidextrous button for opening them. The button sits above the main grip, and it’s easy to extend your thumb upward in order to press it in. That makes it far easier to toss in ammo by hand, or to pour in ammo from the various refill pods sold by Hasbro. Honestly, it’s far better than what we had in the initial Hyper lineup.

The blaster itself is quite comfortable to wield. It may be odd looking in profile, but the grip placements and stock length all feel right. The slightly angled foregrip is very nice, in my opinion, and helps with the rather strong spring load. 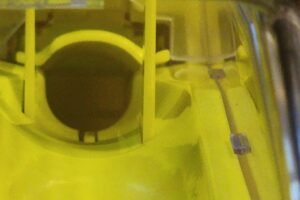 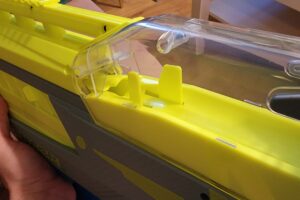 The hopper itself is spacious, and includes several moving parts towards the front. These tabs (and feed neck) articulate in order to unbind any ammo sticking together in the hopper. In addition, the feed neck itself holds about three rounds, which gives a sort of buffer in case a feed issue does occur.

Sadly, I’ve still had that happen more than once…

Even with extra measures in place (as well as plenty of player movement), I’ve had multiple dry shots. That just seems to be the curse of Hyper. In addition, a lack of hop-up means rounds curve wherever they want, leading to lots of missed shots. You have the ammo to keep trying, of course, but you shouldn’t need that.

I got a rather stellar average of 116fps with my Hyper Evolve 100. In addition, although there is no slamfire, three rounds per second is quite feasible. Assuming you have consistent feeding, of course.

The inside of the Evolve 100 isn’t so different from other Hyper blasters. You still have that large plunger tube and strong spring, after all. 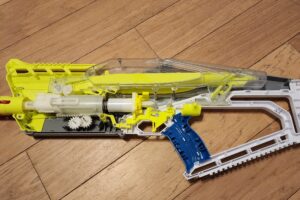 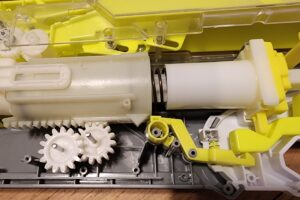 If you do take it apart, note the position of the various gears. Not reassembling properly may mean reloading doors not fully opening etc.

Someone does have a 3d printed option for adding hop-up, and that should increase accuracy dramatically. But it *shouldn’t* be necessary.

The Hyper Evolve 100 is an improvement in some ways; it’s far more capable than the Siege 50, more reliable than the Mach 100, and at a reasonable price. But it still has issues inherent with Hyper, and I still don’t understand why Hasbro refuses to add hop-up to these blasters – it’s desperately needed.