With the flagship blaster out on stores for a few months (and at least one influencer variant on the way), it was a matter of time before a second model appeared. After an entry popped up on Amazon, we became aware of the Legion. Then, a Target near me put it on the shelf early. You know what happens next!

The Nerf Pro Gelfire Legion is unexpectedly more fun than anticipated. The slamfire, while limited in use at range, is satisfying. And compatibility with Mythic parts is a bonus. The ammo velocity is on the low end, but if you’re interested in gel ball, this might still be worth picking up, if only for plinking. 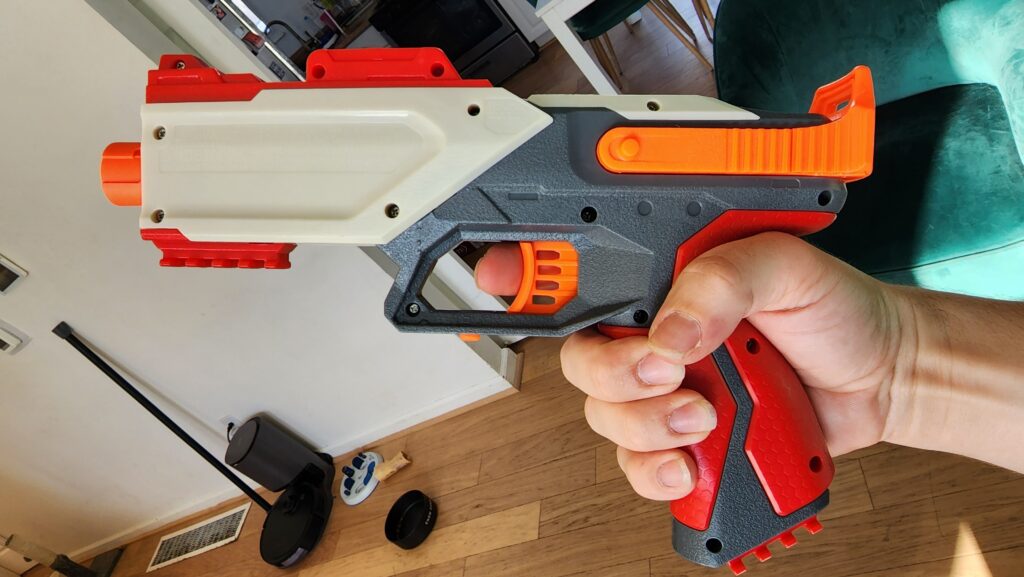 Like the Mythic, the Legion offers a small package for what it delivers, The grip is comfortable, and fits older hands in the same way Rival does. The priming handle can be pulled back with two or three fingers, and has a spring-loaded return. The trigger pull is easy. The feel (if not the operation and internals) is like if the Kronos had been remade for gel ball. Thankfully, the bright colors are there – even so, it’s not exactly something I’d be using in a public park, for instance. (I don’t think gel ball is allowed in parks anyway, but I digress). 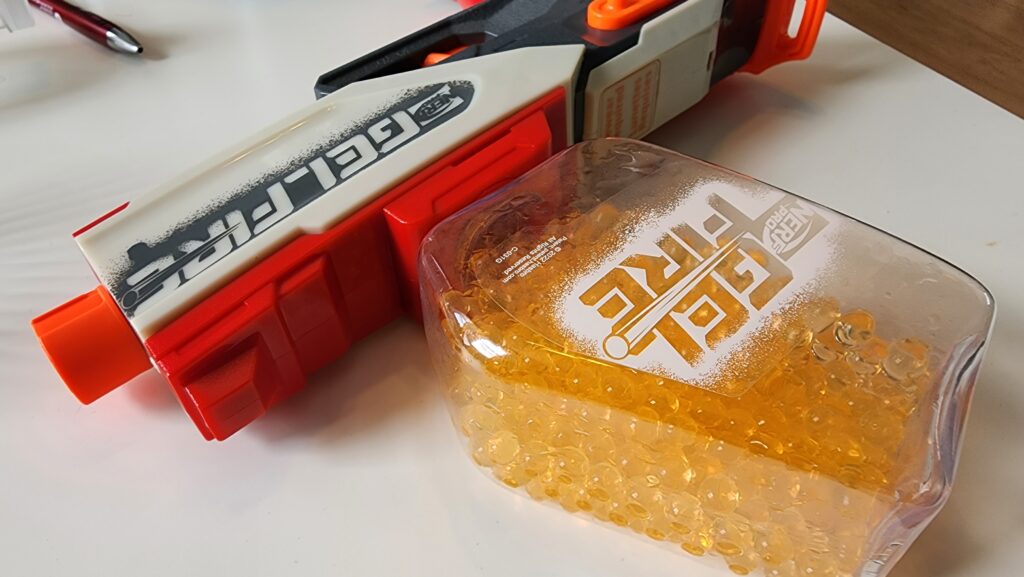 There are two Rival/Hyper rails on the blaster. One sits under the barrel, the other is placed at the bottom of the grip. We have yet to see a use for them, though. At some point, I’d hope Hasbro made attachments to go with the product line. Spare hopper holders, for instance. The safety sits under the trigger.

The Nerf Pro Gelfire Legion sees velocities in the same range as the Mythic; I averaged 132fps. For a simple setup (no hop-up), accuracy was decent enough in terms of hitting a human sized target. Slamfire is less accurate, but also much a lot of fun to use. In addition, the shaking inherent in priming the blaster keeps ammo feeding quite well, at least until you reach the very end.

However, I came across a curious problem. There were a relatively high number of double shots during testing – firing two gel balls still gets velocities over 100fps, but the range and accuracy is hindered. This occurred around once every five or six shots, but seems to be based on how fast you prime the blaster. Slower primes will leave the path from hopper to barrel open longer, leading to that extra round loading.

Warning: I don’t recommend opening this up. The priming handle must be disassembled in order to fully access all screws and pull the blaster apart…and it’s solvent welded. I was able to use a hobby knife and leverage to get things to separate with minimal damage, but that may just be luck.

The Gelfire Legion is somewhat interesting inside, due to the lever system that disconnects the trigger and sear during the prime. There’s also a fun feature concerning the operation of the breech. 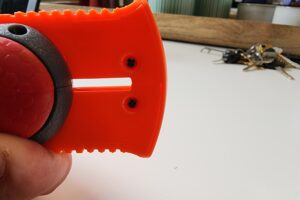 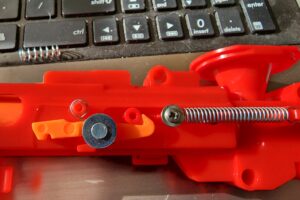 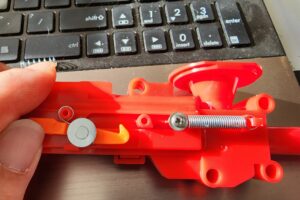 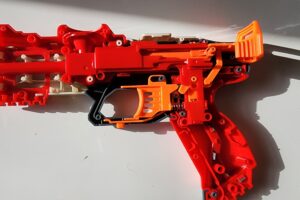 When the plunger is pulled back, the plunger tube (and attached ramrod) also pull back a bit and are caught by a latch. This holds the breech open while you finish priming the blaster. On the return motion, the priming handle interacts with that latch, letting the breech snap shut before the forward motion completes. This is what makes slamfire possible, since you need that sealed breech.

Manual gel ball blasters don’t have the same appeal as full-auto blasters. That being said, the Legion comes close. The double-feeding flaw is unfortunate, and the velocity is still less than the other pistol currently on the market. Even so, it’s not a bad start, and the blaster is one of the most comfortable to hold out there. Compatibility with Mythic parts is also a plus. Perhaps it’s worth a look if you’re dipping your toes into the pool?