The end of 2022 has shown us that Hyper can evolve…but perhaps not as fast as we’d like. Wide, spring-loaded hopper doors are a welcome update to the blaster line, as are attempts to agitate the rounds. The latter part still isn’t as effective as it needs to be, but it’s better than before,

Even so, the lack of hop-up just kills game performance, regardless of initial ball velocity. That trend continues with the Impulse 40. It’s fun to use, but perhaps it shouldn’t be an impulse purchase.

The Impulse 40 works essentially the same as the Fuel 20. You pull back on the priming loop with two fingers, push it back in, and then fire at the target. As per the instructions (and the behavior of the line in general), it’s best to tilt the blaster down while priming to help the rounds feed. There are two tabs moving back and forth within the hopper during the priming motion; these assist in unbinding the balls inside the hopper. Nevertheless, I’ve had plenty of misfires that made Nerf wars more frustrating. 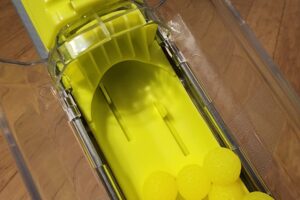 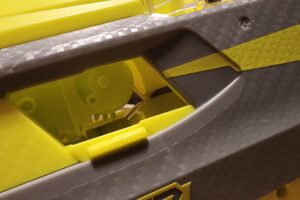 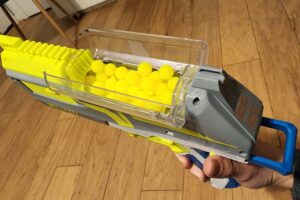 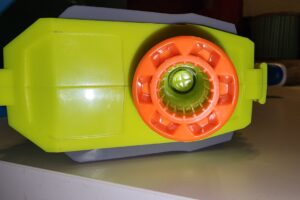 The reloading doors open by lifting your thumb off the grip and pressing a giant button. Let go of the button, and the massive doors spring shut. This makes reloading far easier, and makes using the Hyper canisters much easier (less spilling rounds on the floor).

The blaster itself is quite comfortable to hold and prime. Extra points for a blaster that just feels natural in hand.

At the front of the blaster, though, the barrel still doesn’t feature any sort of hop-up. We know it’s possible to use it with Hyper – 3d printer files for some blasters are available online, and they make a massive difference. Without the hop-up, rounds will curve whichever way they want to, with the occasional one actually going straight for a good distance. This is yet another frustration – up close, it doesn’t matter, but at any sort of distance, it becomes a matter of luck.

As with most of Hyper, ammo velocity is not an issue. I averaged 113fps, which is well in line with other blasters. Rate of fire is limited to around two balls per second, mainly due to the need to point the blaster down, prime it, bring it level, and shoot. 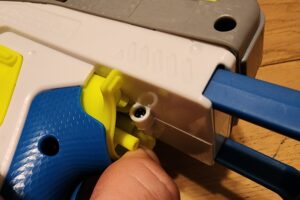 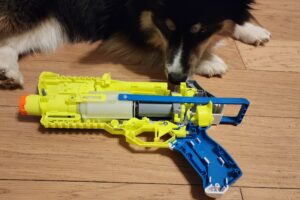 There are a lot of screws to remove, but one in particular is hiding. When you remove the lone screw on the loading door button, you’ll find another screw holding the blaster together.

The inside is largely what you’d expect in a Hyper blaster. Strong spring, moving plunger tube, geared loading system.

Hyper is frustrating to me. There’s so much potential, and yet so much of it is unfulfilled. The Impulse 40 is yet another example of a high velocity, high capacity, and easy-to-use blaster that still falls a bit short. Would it make a kid happy? Of course! Blasters are fun. But if you’re needing the best option for a Nerf war, there are other options.

Still, the Impulse 40 is a compact package. When allowed, I might keep one on my hip in HvZ for emergencies.