As Hasbro expands the reach of the Nerf brand, some attention will (naturally) go toward younger fans. After all, I can recall seeing plenty of people younger than 8 years of age (a common recommendation on blaster packaging) using blasters. In the case of Nerf Elite Jr., the goal is child-sized, easy operation, and appealing aesthetics.

In the case of the Amazon-exclusive Rookie Pack, the included Rambler blaster certainly fits the kid-sized requirement, and it is generally easy for kids to operate. However, between an essentially non-functional slamfire mechanism and the high price, I’m not sure if the Rookie Pack is worth the purchase. 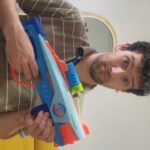 Yep. That’s the first thing I realized when the package from Amazon arrived. I knew this was a kid’s toy, but it is REALLY a kid’s toy. The main grip is rather small and forces the user to have two fingers on the trigger. That in itself isn’t horrible; if this line is meant for beginners, then that design choice allows little kids to pull with more force. I can’t fault them there, even if I don’t personally like it.

Similarly, the pump grip is sized for little hands. There’s no way an adult hand fits comfortably on that angled foregrip, but little hands can. The force needed to prime the blaster feels somewhat low, but that’s again part of the appeal for younger users.

However, the stock isn’t sized for children. It appears sized for lawn gnomes! Honestly, with a stock that short, there’s no reason for it to even be there. 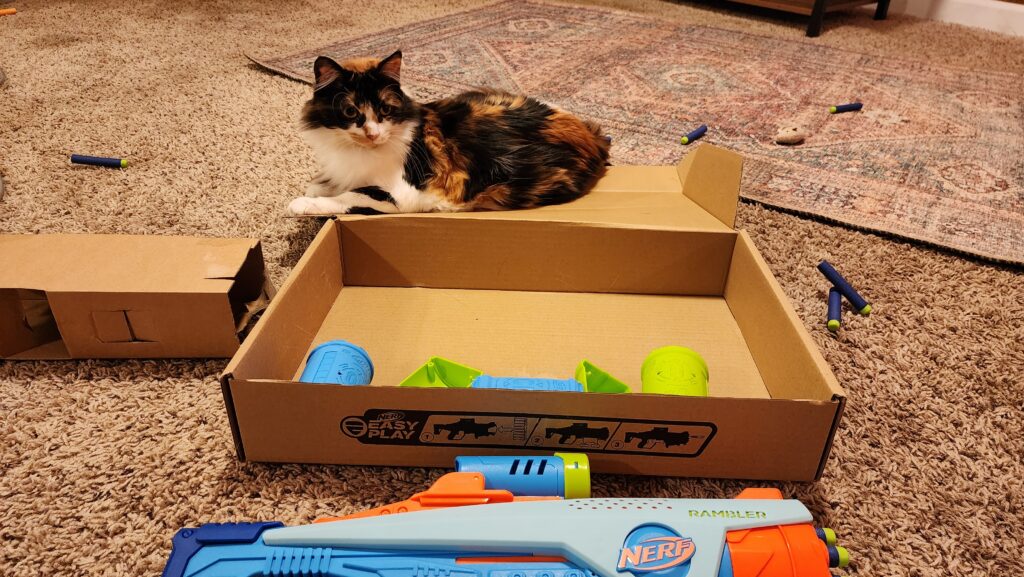 The blaster is a front-loading revolver, with eight dart slots in the cylinder. That makes using the blaster quite easy for normal operation. In addition, the package comes with 32 darts, enough to load the blaster four times. Finally, there are four press-fit target cans in the packaging, for those who want to try their hand at target shooting. This certainly isn’t the first blaster to come with plastic targets, but it is a way to try to up the appeal and justify the price tag.

The blaster does have a slamfire mechanism. but it features a similar flaw to the Dinosquad Armorstrike. Holding down the trigger all the way pushes the catch mechanism out of place, so at best you’re moving the plunger back and forth and barely launching darts. There IS a sweet spot for holding the trigger…but that is clearly not the design intention. Considering young kids’ motor control, that’s a major failure.

There is one other thing to note. The construction of this blaster is somewhat cheaper than other Nerf blasters. If you’ve ever gone into Big Lots or some other store with really cheap blasters on the shelf, you can feel the somewhat softer, more flexible plastic that is used for the product. Aside from the cylinder, trigger, and powertrain, the Rambler is made of the same stuff (simply removing and inserting screws felt like I was going to strip out the threads). Granted, there are enough layers of plastic (adding various colors) to stiffen the final product. But it definitely feels off compared to other Nerf blasters. A kid might not care; this is just a hobbyist observation.

The blaster averaged 56fps with the included Elite darts. This is obviously a reversal in modern dart velocity trends, though for good reason. In addition, you can launch up to three darts per second if you do the slamfire right…but all things considered, that isn’t reliable. Two darts per second is more accurate.

As for using it in a war…it’s possible. Of course, I’m silly like that.

The Rambler has a LOT of screws, plus a cap on the scope that is hooked around two tabs. As such, it’s a bit annoying to disassemble. 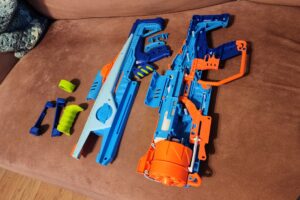 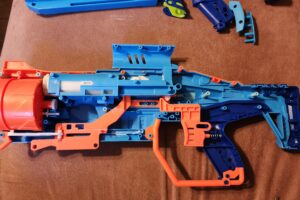 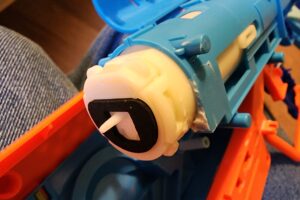 The mechanism isn’t all that different from other Elite blasters, but the air restrictor valve on the plunger tube is on the smaller side. That puts the heart of the design more in line with the original N-Strike series (Elite and onward have valves with longer tabs, and stay open longer). You could put a block behind the trigger to limit movement (and ensure slamfire works every time)…but this is a little kid’s toy. You shouldn’t HAVE to fix something on it.

Kid-sized blasters aren’t new – Buzz Bee has had undersized grips for years! But with a product like this being made for younger fans, it does mean that, practically speaking, they’ll probably grow out of it sooner. Maybe ensuring future purchases is part of the plan, maybe not.

In any case, between a key feature not working and a price tag of $34 dollars, it’s extremely hard to justify the Rookie Pack being worth it. Spending $6-$10 dollars on a Buzz Bee or Xshot pistol often gets you a blaster that’s just as easy to operate, but shoots much farther, For $34, you can also buy other Nerf products that are far larger or more complicated. Heck, the Armorstrike is functionally the same (down to the slamfire flaw), much larger, and with a better design for the same price.