Editor’s note: due to availability issues, the price is…a guess. Sorry for the ambiguity.

Sometimes you stumble upon great deals on blasters you don’t expect to find. That was the case here; Tack Pro is a European brand, so their blasters aren’t really available in the US. They’ve also had several gauntlet-style blasters in the works; they’re notable, especially since D-Dart has shifted course in terms of producing Rival ball-firing products. So when a reseller on Amazon had the Power Ring down to $50 after a sale and discount, I jumped at the opportunity. And I wasn’t disappointed.

One Ring to Rule Them All 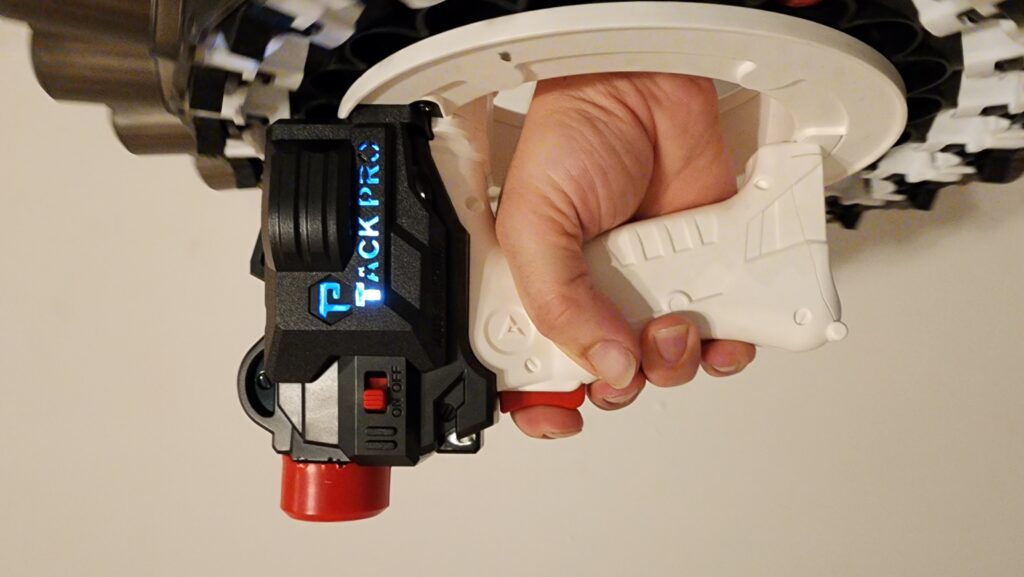 Back in February, I reviewed the D-Dart Blizzard, which held several dozen darts in mini magazines mounted in a ring. It was slow, yes, but it was fairly consistent and fun to use. The Power Ring improves on that, firing foam balls at higher velocities with a similar rate of fire. It’s not without a few caveats, but the overall result is highly satisfying.

Plus, the logo lights up when you press the trigger. That’s always a fun touch!

The big difference here, in terms of electronics, is the included 2s 500mAh Li-ion pack. It’s only a pair of 14500 cells in series, yes, but even a small pack like that can supply more current than the standard loadout of 4 alkaline batteries. 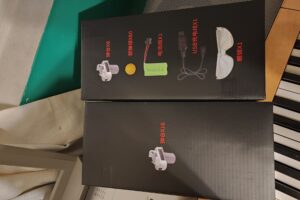 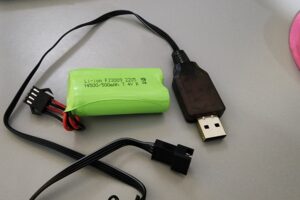 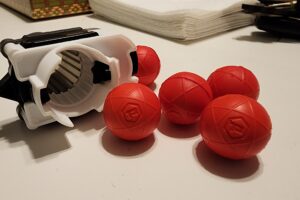 The package includes the battery, USB charger, safety glasses, balls (though not a full compliment), and 22 magazines. Loading the blaster is a bit of a chore, not least of which is because while the magazines can hold 3 balls, there’s room in the ring under them for a 4th. So you can hold 88 balls, but you have to slowly load them all. This isn’t a blaster you’re going to reload on the fly.

The magazines all have two tabs on the outside. One is for physically attaching to the ring itself. The other, meanwhile, is not unlike the detent on a Nerf Rival magazine. As the ring rotates, that triangular tab encounters a solid red plastic piece and gets depressed. This moves an internal tab, allowing the next ball to drop in place for firing. It’s a neat idea, but it seems useless at the moment (the ring doesn’t rotate fast enough to overcome gravity). There’s a chance I’m overlooking something; after all, that tab would be useful to keep the ball in place in spite of sudden aiming movements. So I’ll keep an open mind.

There’s also a slight disadvantage to the small tabs: after an accidental collision, one magazine attaches, but not in a very secure way. Luckily, the assembly is screwed together, so I could take it apart and 3d print a replacement in necessary. Not everyone has that ability, though, so magazine attrition is something to keep in mind.

There is a jam removal lever. Which comes in handy in certain situations. 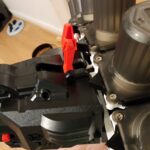 Blaster operation is simple. The On/Off button doesn’t turn on the flywheels. Instead, pressing the trigger turns everything on at once – flywheel motors, ring rotation, and the LED behind the logo. While there is a motor breaking circuit, it’s still possible to occasionally get a jam due to the flywheels not going fast enough. Thus the unjamming lever.

In testing, the Power Ring averaged 78fps on a fully charged battery. That’s below most Rival blasters, but considering both the blaster itself and the composition of the battery, it’s understandable. In the future, once I change the stock battery plug for an XT-60, we’ll see what happens.

As for the rate of fire, I averaged 2.5 balls per second. It’s certainly acceptable for a platform like this, where the space for power supply is limited. Even so, I’m excited to see what happens with a rewire and the use of other batteries.

The Power Ring was lots of fun to use. Not least of which being that a nearby club doesn’t count blaster hits (within reason). That meant the Power ring was a giant shield, and lots of darts ended up bouncing off of it. Granted, my last life in the round above ended when someone hit my blaster-wielding hand. But before then, it was entertaining seeing darts bounce everywhere.

In addition, the rate of fire was enough to hit multiple opponents, when given the chance.

The blaster has no hop-up, so range is limited. That being said, the “barrel” tube is its own piece, so making your own hop-up is possible.

Also, I’ve had to (in the course of use) unjam the blaster more than once. That’s something to keep in mind.

There are a lot of pictures here. You’ve been warned! 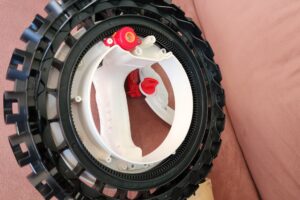 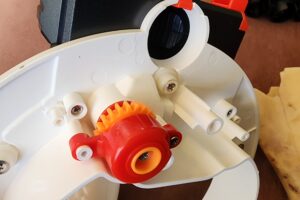 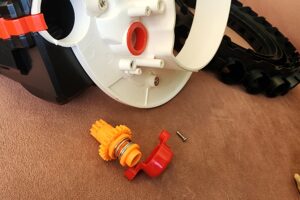 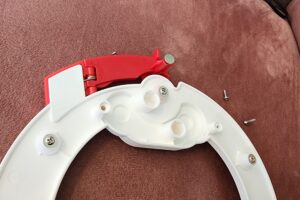 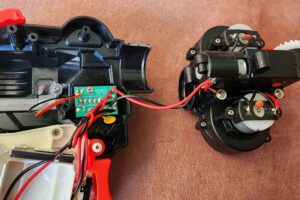 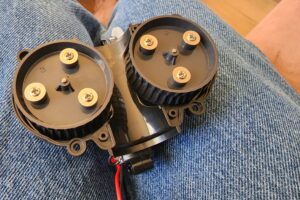 There are multiple layers of plastic to remove, including a barrel cap that is solvent-welded in place. Once you’ve done this, however, there is some modding potential.

The rotation/pusher motor is part of a gearbox with plastic gears, and the whole thing mounts internally to the shell. I know there are gearboxes with metal gears, but I do not know if the gears are compatible, or if you could substitute gearboxes with some smart placement and adhesive. In any case, the stock gears *might* hold up to a stronger battery driving the system, but for how long is up for testing.

Interestingly, the flywheels are actually screwed together, instead of molded and/or welded.

The stock switch on the trigger is better than standard (1A is better than the usual, of course), but any rewire would require a new switch or a MOSFET circuit (with an extra resistor for the LED if you use a higher voltage battery). That said, I’m absolutely going to find a 3S battery that will fit in the grip, and will see what happens.

The Power Ring has been a blast to use, but I realize that I got it for far less than I should have. If it does become available for an affordable price, I’ll absolutely recommend it. For the United States, however…there are far better blasters in both performance and price.