Sometimes, simple is better. Especially when the task at hand is introducing Nerf to a new generation of kids. That’s the goal of the Elite Jr. line, and the Flyer is a standout example.

Easy to use? Check. Lots of dart storage? Check. Low price? Check. It may not be the hardest hitting blaster out there, but for its intended purpose, it’s perfect.

The Flyer is a simple, pullback prime blaster. The priming handle is oversized, as is the trigger. Adult hands might find the ergonomics a bit off, but for small kids, it works great. Using the neighbors as test subjects, the Flyer was easy to operate – all the large surfaces mean small kids can provide the force necessary to use the blaster. That force compared to other blasters is low, granted, but that’s the entire point. 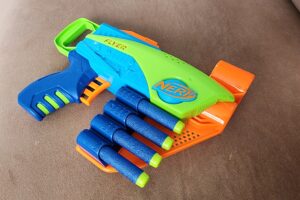 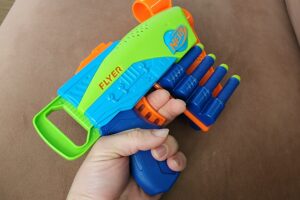 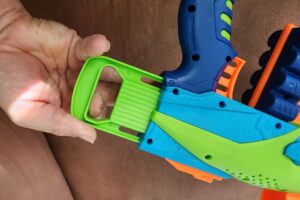 Darts are loaded into the front barrel, which sits in a small depression to guide the end of the dart towards it. Below the barrel are four dart storage slots on each side of the blaster. The darts stay in place, even when running around and shaking the blaster, but the darts are easily pulled out.

The sights are oversized but relatively usable. Again, the focus is enhancing play for really young Nerfers, so I don’t need to fault the blaster for not having accurate aim at ranges beyond what’s intended.

The Flyer averages 50fps exactly, in my testing. For little kids, that’s plenty of velocity to get them started (after a few years, they graduate to regular blasters and higher velocities anyway). The rate of fire is naturally low for a single shot pistol, but one dart per second is quite manageable.

And at least so far, I haven’t had the firing issues plaguing the Explorer.

Once you remove the screws, the guts are easy to see. Everything is simple in layout, with perhaps the largest component being the priming handle!

I’m sure someone will try to modify this, but do we really need to?

The Flyer is a pretty nice blaster. A line meant for kids doesn’t fall as neatly into the rating system as I’d like (given the low dart velocity), but regardless of the number, it’s a great blaster with a purpose. If I had a kid to introduce to Nerf, I’d buy this in a heartbeat.