When the D-Dart Tempest was released in 2019, it was an interesting take on foam blasting. Although it was underpowered, it showed lots of potential, and modders had a field day with it. A second version reached shelves at the beginning of 2021, fixing dart compatibility issues. Now, after some long delays in production and shipping due to the pandemic, Bullseye Limited has fun new variants available through Target. While some aim for faster reloading, rate of fire, or even multiple darts at a time, the Blizzard opts for sheer capacity.

Does it take a while to load? Yes. Are you doomed if you run out of ammo and need to reload? Most likely. But until you reach that point, the Blizzard’s endurance makes for a fun time, much more so than the original.

END_OF_DOCUMENT_TOKEN_TO_BE_REPLACED

Yep, today was a big day, with Hasbro putting out a press release and descriptions for toys across all of its brands. For Nerf, there were four big items, though. Let’s look at the info and dissect!

END_OF_DOCUMENT_TOKEN_TO_BE_REPLACED

Editor’s note: thanks for the free review sample, Hasbro!

The Fate is a fun little blaster, improving on the Knockout before it. Instead of a large grip with a plunger inside (making a “Rival Jolt”), the Fate opts for a simple pullback mechanism. It also simplifies the reloading process, with a barrel that pops open automatically. Simple operation, good performance, and great looks combine for the best showcase of the brand-new Accurounds.

END_OF_DOCUMENT_TOKEN_TO_BE_REPLACED

Editor’s note: thanks to Hasbro for sending this as a free review sample!

A new year brings a new series of Rival blasters, this time boasting improved accuracy over the old. The flagship of this group, the Pathfinder, aims to be the Rival equivalent of the Alpha Trooper. However, among other things, magazine compatibility holds the blaster back from its true potential.

END_OF_DOCUMENT_TOKEN_TO_BE_REPLACED

It’s been noted by others in previous reviews online that the Rival Pathfinder doesn’t like older magazines. The reason? It latches onto a plastic ridge that was added in 2019. I still have a review to write after an upcoming war (and testing), but for now we have a solution. 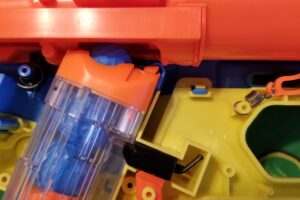 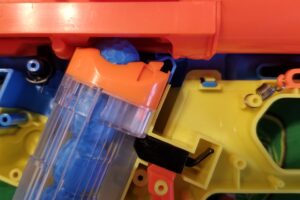 The magazine catch mates with that surface in particular, and holds the magazine up far enough to engage the ball release button. Original Rival magazines, lacking that extra plastic, sit too low to engage that button. With the shims glued on that surface, you’ll be able to use the magazines in the Pathfinder.

The files are on my Thingiverse!

This was a fun thing to see in my Inbox. As per the email:

We’re entering the next phase of Dartzoneblasters.com and we want you to be part of the action! The best website is one that helps you get right to the info you need and the products you want fast so you can get back to flinging foam.

Your impressions can help shape the look, feel, and function of our new website, so don’t hold back! We can take it.

Follow this link if you want to chime in!

It’s not a strict rule, but I tend to keep away from “knockoffs” unless they’re genuinely interesting. This is one of those times. After seeing it on Amazon (and Aliexpress as well), I had to see what was going on.

The K2 looks like a Rival Takedown at first glance, until you see the ball hopper. It does indeed fire Hyper rounds, and while it’s not the most powerful thing on the block, it works well. And it makes me wonder why Hasbro missed a fun opportunity like this.