One of the downsides of having recently launched Blaster Labs is the fact that there are so many terrific, but older products we haven’t been able to formally review. So while we await the onslaught of new-for-2014 blasters that are sure to arrive this year, we’ll continue working our way through the back catalog of notable, but no-longer-new blasters we think are worthy of attention. One such product is the Vortex Vigilon—a modern Nerf classic if ever there was one.

Having been launched as one of the original blasters in the then-new Vortex series back in 2011, the Vigilon remains a staple in the line, being released in the form of a “Sonic Series” (clear green and orange) option, as well as special value packs, and an expected re-release in 2014 with a white, dark red and gray color scheme. Otherwise, this blaster has seen no significant changes in the past couple years, nor has it needed one. In fact, we still think it’s one of the most enjoyable blasters in the range today.

The Vigilon remains a go-to blaster of choice due largely to its simplicity, reliability and consistency. A thumb-switch on both the right and left-hand sides of the body near the trigger releases a spring-loaded ammo door, into which the user can load up to 5 XLR discs (or up to 7 discs, if the feeding spring is pushed down for an extra disc to be inserted, and another disc is also loaded into the chamber). A simple pull on the priming slide on the top of the blaster readies it for use. Once all 5 or more discs have been unloaded, the user simply hits the thumb switch to drop the ammo door, loads one or more discs, then continues blasting. Aside from the discs being a bit fidgety to load (they have to be seated properly and right-side-up to avoid jams), the reloading process is actually one of the most enjoyable aspects of this blaster. It runs out of ammo fairly quickly, but tapping the thumb release and hearing (and feeling) the ammo door spring out to accept additional discs just never gets old. It’s a very tactile, satisfying feeling and makes the process of reloading a little more enjoyable.

Of course, ease of reloading isn’t why anyone buys a Nerf blaster. They buy one because it either looks cool, or they believe it will perform well. 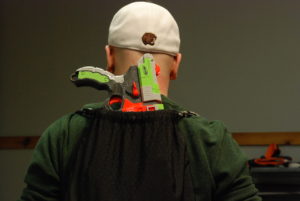 Of course, ease of reloading isn’t why anyone buys a Nerf blaster. They buy one because it either looks cool, or they believe it will perform well. On the aesthetics side, the Vigilon’s front-heavy, Judge Dredd “Lawgiver”-inspired look is appropriately new-tech in appearance. However, the original (and quite gaudy) green and red color scheme is getting somewhat long-in-the-tooth. And equally unfortunate, the white and red color scheme due in 2014 appears to have been inspired by a child scribbling with a marker on a wall. So this isn’t necessarily a blaster that any one will be buying in 2014 based on looks alone.

Fortunately, the Vigilon’s performance and reliability is where it justifies its continued existence. We test in a narrow, hallway-like space which limits how far off-center shots are allowed to veer—only shots that remain true will fly the furthest. And under these conditions, we averaged up to 58 feet firing from shoulder-height without any angle, which is solid. But with a 30-degree arc, our ranges declined slightly, to an average max of 56 feet. We presume this is due to discs veering off-course and hitting walls before reaching their maximum flight potential. Still, in battle, if the shots aren’t at least somewhat on-target, it doesn’t matter how far they fly. So we see our original 58 feet distances as a more accurate representation of this blaster’s utility.

Firing rates are as expect for a manually-primed unit, which is to say, not particularly quick. We averaged about one disc per second, and after 5 seconds, a reload is required. This isn’t bad, especially since reloading is relatively easy, but it’s not exceptional compared to flywheel or even Slam-fire capable blasters. And as noted previously, jamming isn’t typically an issue, so long as the user remembers to put the discs in correctly, and doesn’t rush the process.

*Image is property of Hasbro

In actual use, the Vigilon is mostly a fun ride. The physical “clunk” of the ammo door springing open heightens the “mil-sim” feel of it, and being able to reload without having to fill a clip or drum makes it easy to stay in the thick of the fight without becoming a target. Unfortunately, without a larger ammo chamber or any means of rapid-fire, other blasters will easily outclass and overpower the Vigilon. In addition, one of our testers found the thumb-switch for the ammo door to easy to trip when walking or running, resulting in a full chamber of discs being unloaded unexpectedly… a buzz-kill, to say the least.

Still, the Vigilon can easily be seen as the “Maverick Rev-6” of the Vortex line. Aside from similarities in proportion to the Maverick, the Vigilon is one of the easiest ways to step into the Vortex series financially, just like the Maverick. And again like the Maverick, the Vigilon is a solid and reliable performer that can generally hold its own against moderately larger and more capable models. It’s also very easy to use, and aptly demonstrates the various benefits of disc-based blasting versus traditional dart tagging. And even with all of the other blasters currently at our disposable, in any given firefight, at least one person will be seen still using a Vigilon… just like the Maverick in its day. And at this stage in the Vigilon’s life cycle, that alone speaks volumes.