If you think you’ve seen the Nerf N-Strike Elite Rampage before, it’s because you have: it was called the Nerf N-Strike Raider CS-35 when it was first introduced in 2009. And that’s significant, because the original Raider started something of a trend at Nerf. With its record-breaking 35-dart drum and totally new “Slam-fire” ability, the Raider was the first Nerf blaster to have a special release, which occurred on 9/9/2009. And in subsequent years, we likewise saw the introduction of the Stampeded ECS on 9/9/2010, the Vortex series launch on 9/10/2011, and the Hail-Fire Elite reveal on 9/9/2012. The original Raider is notable, then, as the first in a series of subsequent “flagship” product introductions.

With the introduction of the Elite Rampage on 8/1/2012, however, it was clear this upgraded, Elite version of the Raider was no longer at the top of the Nerf range. In fact, it was released with a smaller, 25 disc drum (versus the original Raider’s 35 disc drum), and without the shoulder stock that came standard with the Raider. However, at roughly $29.99, the price remained the same. So the newer Rampage became something of a middle child, neither looking “new,” nor having a special introduction that would cement its place in the range. And that relatively anonymity is, perhaps, this blaster’s greatest strength.

As with the original Raider, the Rampage is a large-ish (20”), drum-fed blaster with Nerf’s awesome Slam-fire ability. It likewise has a right-mounted jam door, a shoulder-stock mounting point, a secret dart holder in the handle, a tactical rail up-top, and a left-mounted side-load system. But unlike the Raider, the Rampage does not come with a shoulder stock, and its drum has been down-sized to a teardrop-shaped version that holds 25 darts (10 fewer than the Raider). Most notably, the Rampage is advertised as an Elite model with a purported range of up to 75 feet, versus the Raider’s standard N-Strike ranges.

The newer Rampage became something of a middle child… and that relatively anonymity is, perhaps, this blaster’s greatest strength. 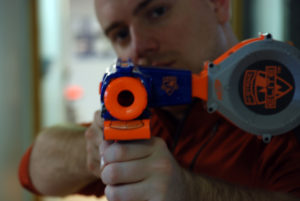 It’s that last point that is most significant. While we were disappointed to see the newer Rampage being sold at the same point as its predecessor with a lowered dart capacity and lack of a shoulder stock, we were simply unprepared for what the change to a direct plunger system would do for this blaster. Our average ranges from shoulder-height and no elevation were a very solid 51 feet. But give it a slight arc (up to 30 degrees), and this blaster will hit 70 feet… 73 feet… all the way up to nearly 75 feet! Now, we realize the box says “up to 75 feet,” so we shouldn’t be surprised. But the honest truth is that, in our indoor testing facility with controlled temperature, humidity, etc., we simply never hit the advertised ranges. We can assume that once in a while there will be a dud, but across the several dozen blasters we own, we’ve just not found most of them to live up to their own hype. But here, for one of the first times in recent memory, we have an Elite blaster that truly performs.

With its rock-solid ranges, we might be inclined to think of the Rampage as a sniper-type blaster, except for one unique point of distinction—if your forearm is up to the task, the Rampage can hit nearly a 3 dart-per-second rate-of-fire! And that’s without a reduction in range or accuracy, nor any noticeable tendency to jam. If fact, our dart groups were extremely tight (much more so than shorter-range Elite models like the Strongarm or Triad, even). So it’s a good thing this blaster has a large disc drum… we derided the Stryfe for being woefully ill-equipped in that regard, and the Rampage does carry fewer darts than the Raider did. But 25 darts is still solid, and noticeably less bulky than the drum on the Rampage. 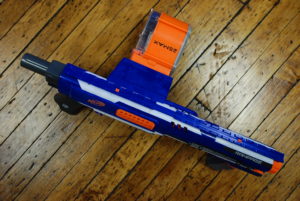 If we’re picking nits, we would have to mention that right-handed gunners may find their view being blocked by the drum, on occasion. And that protrusion also creates a weight imbalance that will require the user to keep both hands on the blaster while firing. We also found several of our staffers stumped for days by the clip loading system, which requires the priming handle to be pulled back for proper release (for some reason, having the handle fully forward seems to be more intuitive). But once “user error” is removed, the Rampage performed solidly in most regards.

It’s ironic that one of the best performing blasters in the Elite range is something of a middle-child now, being overshadowed by the likes of the Centurion, Hail-Fire, etc. Because when the chips are down, we’d much prefer to grab the Rampage and go. The range will surprise a few people, and the capacity will keep us in the game longer. And the fact that it doesn’t draw attention to itself anymore will keep its user from becoming an obvious target. And that, perhaps, is the Rampage’s greatest strength of all.