With the Toy Fair in London in full swing, we anticipate any number of new Nerf products to be announced. Among these expectations, we expect to see an expansion of the Zombie Strike line, as has already been demonstrated with the recent announcement of the Slingfire. But while new blaster announcements are getting their fair share of attention, we thought we’d take a moment and point out one other little addition we recently discovered: a fun little online Unity Web Player game called “Zombie Strike Defender.” 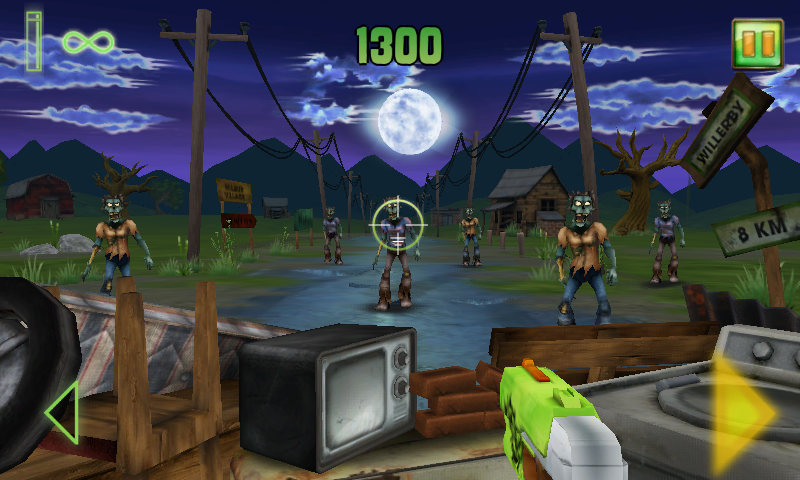 Zombie Strike Defender is a classic shooter, where you stand behind a barricade and shoot whatever pops up, moving left or right to defend your pile of protective debris. In this case, there is an ever-growing horde of undead closing in on you, slowly breaking away your defenses until there is nothing standing between them and you (though the game never actually shows what happens when the zombies win—that might be too gruesome for the intended audience). Typically there are just a few re-colors of the same enemies, but as you progress, larger zombies do appear, and they require multiple shots to kill. This quick-on-the-trigger game starts you off with the Sidestrike, and eventually provides opportunities to upgrade to the Crossfire Bow or 3-shot Sledgefire.

While this short little Zombie game isn’t anything ground-breaking, it’s a moderately enjoyable time killer. The blasters shoot a bit straighter than real life (ok, a LOT straighter), and there’s no real accounting for reload times. But aiming upward does seem to give the shots a little extra distance, and the rounds do have a limited range. So, give it a shot when you have a free minute. Oh, and when you do play, be sure to let us know your high score!