In the course of doing product reviews, it’s not uncommon to receive a highly anticipated item, only to have it fall flat during testing. Those can be hard reviews to write, because the manufacturer is often very excited about what they’ve sent us, yet we still have to be honest in our findings. And sometimes those findings are not very flattering. But every so often, the opposite happens. In the case of the Dart Zone Covert Ops Scorpion Gatling Blaster, “the opposite” happened in a big way. In fact, this just might be one of the most refreshing–and frankly, most surprising–products to come our way so far this year.

When we were contacted in June by Prime Time Toys about a new “headliner” product coming our way, we didn’t know what to expect. So when a box arrived earlier this week and we found the Dart Zone Covert Ops Scorpion Gatling Blaster resting inside, our interest was piqued. The Scorpion looked similar to the Air Zone Quickfire we’d seen at Toys “R” Us, but it was clearly different in the details, and the “Covert Ops” branding was new to us. Fortunately, Prime Time clued us in: the Dart Zone Scorpion Gatling Blaster will be sold as a Wal-Mart exclusive in the fall of 2014. It’s fully automatic, and includes a 20-round ammo belt and 20 of the company’s Super Darts. The “Covert Ops” name is a registered trademark, and Prime Time hinted that this branding will be part of a “growing identity” with “new product launches” to come.

Before we go any further, we know not all of our readers will be familiar with Prime Time Toys, so here’s a quick summary. Founded in 1990, Prime Time Toys has become known for its line of pool and outdoor toys, including Splash Bombs and the Max Liquidator (the latter being the current #1 pool toy in the US). More recently, Prime Time has become known for their Dart Zone brand of foam dart blasters after having developed technical expertise as the leading vendor behind the Air Zone line of products at Toys “R” Us. Prime Time has over 100 different products sold at major retailers like Wal-Mart, Target, Toys “R” Us, Kmart, Dick’s, Sports Authority, CVS, Kroger, Albertson’s, and many more. Though headquartered in Hong Kong, Prime Time has full-time, US-based sales, marketing, and customer support operations that operate out of New Jersey and Tennessee. In fact, according to sales literature, Prime Time views the US as their “second home.” So now that you know more about the company behind the name, let’s get back to the Scorpion!

The Scorpion is a little smaller than it looks in the box. A huge, imposing blaster like the Nerf Vulcan, this is not. In fact, don’t let the perspective in the photo below fool you–the Scorpion is only slightly more than half the length of a Vulcan, and probably about a third of the weight. So while the intimidation factor is definitely ratcheted down a notch, this compact size does make it easier to carry. And that’s an especially good thing, given that the Scorpion doesn’t come with a stand, and both of the primary handling points are on the small side. The top-mounted grab handle is large enough for maybe three fingers to get around, but the main handle and finger guard are nearly as cramped, and the trigger opening is likewise very tight. Perhaps the smallish size will make the Scorpion marginally more manageable for children, at least. 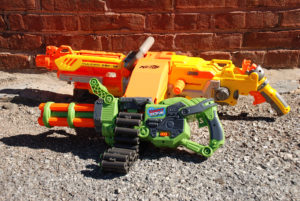 There’s one other minor ergonomic issue, and that’s the location of the “on/off” switch on the side of the blaster body. Unlike flywheel-based Nerf blasters that typically place an “Acceleration Trigger” close to the main trigger, the Scorpion’s flywheel switch is on the left side of the body, where a second hand is required to turn it on or off. This would curtail any dual-wielding Rambo fantasies, unless you simply left the triggers in the “on” position with the motors spinning.

From an aesthetic standpoint, we’re cool with the green, gray and orange color palette of the Scorpion, though the shiny plastics have a down-market feel that is unfortunate. Both Hasbro and Mattel have figured out how to make quality plastics, but the value-priced brands like Buzz Bee, Zuru, and Prime Time are still a grade or two behind. In addition, the Scorpion doesn’t really feel cohesive from an industrial design standpoint, with seemingly random lines, patterns, and faux-mechanical details scattered across the shell, handles, and other parts. It’s better than just leaving blank, smooth surfaces everywhere, but again, it’s lacking the careful, thought-through choices we see in Nerf products that help them look like real, functional devices. And the “Dart Zone” sticker is unfortunate… you’d never see a sticker on a Nerf product, and there’s a reason why. Lastly, we’re no fan of faux rotating barrels. We don’t know what effect they’ll have on battery life, but it’s still energy being spent. All that being said, the overall design is still a step up from what we’ve seen from value-priced blasters in the past, so we’d encourage Prime Time to keep pushing forward in that regard.

Here’s where the Dart Zone Scorpion knocked our socks off. When we tested ranges in our height-limited indoor office setting, we ripped off shots that were consistently in the 70 feet and above range, easily reaching a full 75 feet (and easily exceeding the “Up to 70 Feet” call-out on the box). Honestly, if we had even more of an arc than our 11′ ceilings would allow, we wouldn’t have been surprised to hit 80 or maybe even 90 feet! And this was without giving the Scorpion a rest… keeping the trigger down, we knocked out 20 shots in 16 seconds. It’s not blazingly fast, mind you, but fast enough. In fact, we rather liked the pace, as blasters like the BOOMco Rapid Madness are so fast, you quite literally run out of darts in 2 seconds. The Scorpion’s slightly more measured pace allows you to make subtle aiming adjustments as you shoot without suddenly running out of ammo.

And you’ll need to make those aiming adjustments, as the Scorpion is no accuracy king. While Prime Time’s “Super Darts” are indeed pretty super at both distance and speed (an average of 10 feet in range and 10 FPS in muzzle velocity better than Nerf Elite darts), they are not particularly accurate. In fact, our groupings were pretty lousy, with shots flying out in random left / right trajectories upon leaving the barrel. However, they were consistent in one regard–distance. Virtually every shot fired would go as far as the last. So while we had a huge left to right spread, the shots were within about 5-10 feet of each other over the course of their 70-foot flight.

The Scorpion achieves its incredible ranges via high flywheel RPMs to create super-high dart velocities (also thanks, in part, to those lightweight Super Darts, which are only 0.88g versus the 1.00g weight of a typical Nerf Elite dart). We tested a lot of shots using our chronograph, and using the Prime Time Super Darts, the Scorpion put out a low of 91 feet-per-second, and a high of 100 feet-per-second, with an astounding average of 95 feet-per-second! We found that Nerf Elites were still hitting an impressive average of 85 feet-per-second. We know of a lot of blasters that can’t hit those speeds modded, much less right out of the box! And here’s what’s also fun–the Scorpion’s flywheels are almost completely exposed under the breech through a small hole, so you can feed single darts by hand and watch them fly right through to the other side. We suspect this blaster will see some love by the modding community–everything appears to be very straightforward and accessible (not that you’d need to, given the stock performance).

Reloading is a bit of a pain, given the Scorpion’s continuous, 20-round ammo belt. We wish it had a clasp at one end that would allow it to be connected to additional ammo belts (which could be sold as an accessory). As it is, you need to carefully slide the ammo belt ring over the body of the blaster for the greatest ease of reloading. Then you slide it back over the blaster and under the breech cover. We also wish the Scorpion came with additional ammunition. Even in our closed environment, we’ve already lost several darts in the process of testing. And without any spare darts included in the box, the ammo belt is left partially empty.

There are lots of details that could be improved upon with the Dart Zone Scorpion… ergonomics, plastic quality, accuracy, etc. But here’s one detail that they’ve knocked out of the park: the Scorpion’s suggested retail price is only $19.99! Compared to the Air Zone Quickfire at $44.99, this is already a good value. But given the Scorpion’s ability to hit a phenomenal 100 feet-per-second dart velocity AND a nearly as impressive 75 foot range, we’re simply astounded at the price point. If there was an award for “Best Blaster Value of the Year,” we have a feeling the Dart Zone Scorpion would be a runaway winner.

Of course, price alone would be irrelevant if the Scorpion wasn’t any fun to use. Fortunately–and quite unlike many blasters we’ve reviewed recently that have relied on gimmicks (shields, scopes, angle meters, etc.) to make an impression–the Scorpion is happily free of needless bells and whistles, apart from the spinning barrel conceit. And perhaps it’s that simplicity combined with the stellar performance that has already made the Scorpion one of the favorites among our team. In fact, we recently had a miniature shoot-out where a Nerf Demolisher and a Dart Zone Scorpion were left sitting on a table, with each combatant free to grab a blaster and shoot the opponent when we said “go.” And wouldn’t you know, each competitor instinctively grabbed for the Scorpion first! We can hardly think of a higher endorsement.