It’s been said that you should never meet your hero. Inevitably, they will fail to live up to the expectations you have created for them. It was this fear of unmet expectations, perhaps, that made our review of the Nerf N-Strike Elite Rayven CS-12 Stinger so long in coming. We have no shortage of toy blasters at our disposal, but for me, the Stinger is a personal favorite. It’s the weapon I have hanging from a hook under my desk, ready for action at a moment’s notice. It’s a blaster that I purchased with my own money, and that no one else on our team uses. It’s a product so obscure, all but die-hard Nerf fans even know what it is, or why it’s different. And, unfortunately for me, it’s also one item on our list that is way overdue for a review.

Before we get into the nitty-gritty of this particular blaster, we should take a moment to discuss the difference between the Nerf N-Strike Elite Rayven Stinger and most Nerf and other foam dart weaponry, for those who might not be super familiar with various types of firearms. The Rayven Stinger is what’s known as a “bullpup” design. This simply means that the action and the magazine (or “clip,” in Nerf-speak) are physically located aft of the trigger region, which usually means a shorter overall gun length, and typically less weight, as well. In real firearms, this has the theoretical advantage of making the weapon more maneuverable and less tiresome to hold and carry (lower weight and less fatigue of the firing arm), all while maintaining the same barrel length as a traditional firearm. And while models like the futuristic-looking Steyr AUG or FN F2000 may suggest the bullpup design is hyper-modern, its roots can actually be traced back to firearms designs from the early 1900s. In fact, the bullpup format has been around for so long that, by our count, there are currently nearly 100 different models produced by a multitude of companies, and in formats that include rifles (assault, sniper, and otherwise), machine guns, SMGs, and even shotguns. It’s a design that has been improved over time, and is now used by various military and law-enforcement agencies worldwide. 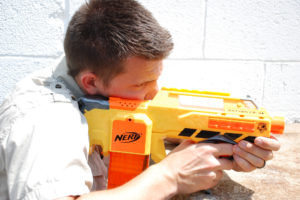 Despite the long history of real-world examples from which to draw inspiration, many in the Nerf community were still surprised when Hasbro officially introduced the original Rayven CS-18 via a “soft” release just after Christmas in 2011. This actually wasn’t the first Nerf product to feature a bullpup design, however–that distinction belongs to the Firefly REV-8, which was released nearly 7 years prior. In a clear nod to its predecessor, the newer Rayven featured “Firefly Tech” (see what they did there?) with glow-in-the-dark darts, in addition to its trigger-forward design. The Rayven was far more “tactical” in appearance than its forebear, however, and quickly won a following, despite being the last blaster introduced under the older “N-Strike” label (with underwhelming performance to match). Fast-forward to 2013, and the updated Elite Rayven CS-18 was introduced to take the place of the older N-Strike model. It featured the newer Elite color palette and updated Elite-level performance, while still maintaining the gimmicky Firefly Tech clip and glow-in-the-dark darts. And that brings us to September of 2013, when the subject of our review started mysteriously making appearances. The Rayven Stinger was never formally announced by Hasbro, and even finding official information about it was a challenge. But after some digging, Hasbro’s PR firm eventually provided us with the following:

That’s about as “official” as it gets for the Rayven Stinger. But what most people will realize rather quickly is that the Stinger is colored in the older N-Strike yellow and orange hues, apart from some black striping down the side. In addition, it has unique yellow/black dart coloring, and a standard 12 dart clip (with Firefly Tech happily absent). The lack of the Firely Tech clip also removes the weight of 3 AA batteries, along with the more sizable 18 dart clip. This has given the Stinger the description of being the “lightweight” Rayven, though pairing a standard Rayven with a similar clip would provide the exact same benefit. 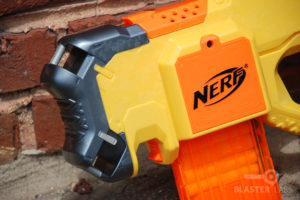 Despite the fact that the Rayven Stinger is, for all intents and purposes, a standard Elite Rayven with a smaller clip, it does have a unique aesthetic. To our eyes, the Elite version of the Rayven (particularly with the standard Firefly clip) is somewhat garish. We know not everyone agrees with this, and many like the Elite color palette just fine, but we find the old-school N-Strike color palettes to be a little less jarring (and yellow and black thing works well with the “Stinger” name, of course). But that’s a personal preference, and at the end of the day, all three versions have the exact same bullpup design, which we find incredibly attractive, regardless of coloration. It’s a design that looks both futuristic and realistic. It’s also very balanced-looking, which can be difficult for a bullpup design, where much of the visual “weight” is behind the trigger. And, as usual with Nerf-branded products, there are small design touches throughout that really help bring things to life… the hidden magazine release, the all-terrain handle guard pattern, the gray color accents at human touch-points, the strap mount point texturing, the trigger perforations, the digital camo blocks on the blaster body, the flip-open jam door, etc. Hasbro sure knows how to make a pretty blaster, nicely detailed blaster (even if the colors are still somewhat questionable).

But the Rayven Stinger isn’t just a pretty face. It’s perhaps the most comfortable blaster ever created. Ok, so this one is also very highly subjective, and some players will argue the mid/back weight balance creates its own issues. Fair enough. But for many of us, the Rayven would be a go-to blaster of choice for the ergonomics alone, much less its performance–and that’s really saying something when you think about how many blaster choices are available today. Just like its real-life counterparts, many people enjoy the bullpup’s compact dimensions, easy maneuverability, and rearward weight distribution. It’s a personal preference, but for those who like it, they really like it, and it can be hard to go back to something as nose-heavy as the Nerf Demolisher.

All that being said, the Rayven does have ergonomic and related design issues that will be deal-breakers for some people. For instance, it’s long been reported that the Rayven (older models, especially) have difficult trigger draws. This is actually fairly common among bullpup designs–including real firearms. With a bullpup design, the trigger can be several inches (or more) away from the actual firing mechanism, necessitating extension bars. Modern designs can overcome this with various weight and pulley systems, or electronic triggers. But the Rayven uses a lever pushing a bar against another lever with a spring… basically, the stock pusher set-up is just poorly implemented. In our experience, the Rayven Stinger flat-out has among the worst triggers of any blaster available today. To make matters worse, there have also been issues reported with the flywheel cage and magazine feed alignment, unnecessary locks, thin wiring, etc. that power-users and modders typically cite as problems versus a more conventional design like the Nerf Stryfe. On the flip side, the Stryfe can’t handle 35-round drums without modification, has a center of gravity further away from the hand, and for whatever reason, tends to be more prone to jamming (in our experience, as well as many of those on Reddit). Also, apart from the aforementioned issue with the trigger, none of our Rayvens have any of the other issues often cited. So we have a hard time saying all Rayvens are inherently flawed, though we would agree the chance for a potential problem is greater than a traditional design. Pick your poison, as they say. 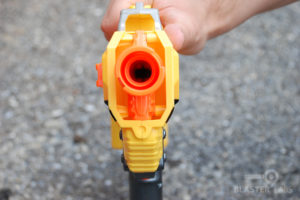 We found the Nerf Rayven Stinger to have performance that is in the top 1/3 of the blasters we’ve test-to-date. It’s not a superstar in any one area, but it performs solidly in several. In our height-limited indoor office setting, we managed distances of 62 feet, with reasonable consistency. The groupings were typical of Elite products, which is to say “okay,” but fishtailing was evident on a regular basis. It should also be noted that we waited several seconds between shots, which is necessary for the Rayven’s flywheels to spool-up to maximum speeds. This is a known-issue with many flywheel-based blasters, though some models like the Nerf Rapidstrike have ways around this.

Turning to muzzle velocity, we measured a low of 62 feet-per-second, a high of 71 feet-per-second, and an average of 67 feet-per-second on our chronograph. This is at or above what we see with most Nerf and BOOMco blaster (but nowhere near the phenomenal Dart Zone Scorpion–another flywheel-based design that was pushing nearly 100 feet per second!). We understand voltage modifications are received well by the Rayven, though this is not something we have attempted (nor do we or Hasbro recommend doing so).

Where the Rayven Stinger really excels is rate-of-fire. Now, we’re not talking anything close to a screaming 10 darts-per-second rate like our current champ, the BOOMco Rapid Madness. Nevertheless, for a semi-auto design, the Rayven managed to empty its entire 12 dart clip in a very impressive 2.5 seconds. The difficult trigger resulted in several botched test attempts, but with enough repetition, we settled on this being about the best figured that would be possible for an average user to obtain. It should again be noted, however, that for maximum distance, a much slower rate-of-fire will be necessitated for the flywheels to obtain maximum RPMs.

The current Nerf Elite Rayven CS-18 with Firefly Tech clips is available for around $34.99. That’s a $10 premium over the original $24.99 asking price of the Rayven Stinger on review here, all for a slightly larger clip that makes your darts glow (while also making your blaster heavier to carry, in the process). We don’t think that’s a particularly strong value. However, the more lightweight Stinger version at $24.99 represents a much more realistic proposition. At $19.99, we would have called it a winner. At the original $24.99 price, we’d still call it good value, but not a great one. Of course, the Stinger is no longer being produced, so finding new ones at any price will become increasingly difficult, unless we see a re-release with new colors (please, Hasbro, make this happen!).

The Rayven, in all its iterations, was a bold move for Nerf, as it represents a type of design that is under-served in the blaster market. At its core, this is a fun, comfortable blaster that simply lets you get on with business and enjoy blasting your opponent. And while other models may offer similar or better performance for the same–or lower–prices, the Rayven still has its place. For those of us who care about aesthetics, ergonomics, and ease-of-use, the Rayven is at the very head of the class. It may not represent the pinnacle of blaster technology, and its practicality may even be called into question by the most hardcore among us. But it’s hard to deny that the Rayven stands virtually alone in the unique qualities it offers.

And that’s the thing about heroes, and why meeting them doesn’t have to be a disappointment. Yes, you may find a flaw or two, and perhaps that reality is hard to face. But sometimes that just helps you connect better, realizing your hero is your hero for a reason… not because of the flaws you find, but because of how they overcome them and still entrance you with the thing that captured your attention in the first place. It’s then you realize why you’ve placed them on a pedestal. It’s then you realize that they still have something different that makes them a bit special, after all.