The Buzz Bee Sidewinder is a formidable-looking blaster. With its massive 30 dart drum, it has the kind of presence that would give an adversary pause. It also has the potential to be a really solid performer, but is handicapped by the manufacturer in such an odd way that we didn’t quite know how to review it. Do we review the blaster as it was sent to us (and as it appears on store shelves), or do we review it the way it should be used? Perhaps we’ll do a little of both.

Released in 2013 as part of the Buzz Bee Air Warriors line (equivalent to the older Nerf N-Strike series), the Sidewinder comes tidily packed in an open box that showcases the full length of the blaster, three rows of 10 darts each, a gargantuan-looking 30 dart drum, and the hardware necessary to put it all together. The box proclaims “30 dart rapid blasting!”, leaving no doubt as to the manufacturer’s intent on this being a high rate-of-fire blaster. Unfortunately, there’s also a 30 foot range claim, which is rather disappointing in a world where Nerf XD and Mega products are suggesting ranges of 85 and even 90 feet, or more. Nonetheless, the packaging is nicely done, and with that huge drum and 30 dart pack-in at a suggested retail price of $19.99, it makes a solid presentation of itself on store shelves.

The Buzz Bee Sidewinder can be found in two colors: dark blue and a sort of alien-esque green. Neither color is particularly offensive, though neither is as interesting as something you’d see from Hasbro or Mattel. And, as we’ve said in the past, the abundance of smooth-sided plastics, over-use of a single color, and general lack of surface detailing don’t do much to down-play the “value store” feel. And as we’ve also said before, we hate the use of stickers on blasters… they look cheap, wear easily, and distract from any semblance of realism that might otherwise have been achieved. Otherwise, though, the overall look, feel, and shape of the Sidewinder is reasonably pleasing, particularly with that high intimidation factor provided by the 30 dart drum. 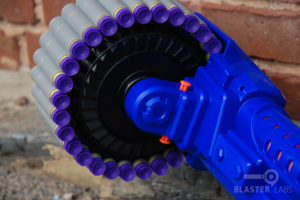 While we’re talking about design, we’d be remiss if we didn’t mention the elephant in the room–the Buzz Bee Sidewinder looks a LOT like the Nerf Raider (and it’s smaller-drummed successor, the Nerf Rampage). All three have similar pump-action form-factors, and all three have large, side-mounted drums. The Raider was released in 2009, the Rampage in 2012, and the Sidewinder in 2013. We’ll let you do the math on the timeline, and for our part, we’ll simply say imitation is the sincerest form of flattery, and leave it at that.

Ergonomically, we have very few complaints. Unlike the BOOMco line of products from Mattel that try too hard to appeal to very young children with their overly small grip sizes, the Sidewinder proves to be “just right” in both fore and aft grip feel, and the front-to-back spacing of the grips is spot-on, as well. We also found the weighting to be reasonably balanced from tip to trigger, though the left/right balance is definitely lopsided due to the drum’s right-handed mounting, which necessitates both hands be kept on the grips when in use. The trigger is entirely non-functional (a point we’ll revisit in a moment), but it does provide a familiar feel for those of us who expect our blasters to always have triggers.

In use, the Sidewinder is a mixed-bag. As noted, the trigger is a simple cosmetic addition that serves no purpose whatsoever (it can’t even be depressed). The entirety of the Sidewinder’s action happens with the fore-grip. When you move the pump-action grip forward, an internal ratchet mechanism advances the drum one slot. Firing is accomplished by pulling the grip towards one’s body as forcefully and rapidly as possible. The velocity with which a dart exits is entirely dependent on the force applied to the pump. In this regard, the Sidewinder is actually a lot of fun to use. Unlike many motorized blasters that simple require you to have good batteries and a working trigger finger, the Sidewinder is more of a whole-body affair. The more “thrust” you put in, the more you get out (to a point). And that’s actually a lot of fun. The downside, as with most pump-to-fire (or “slam-fire”) style blasters, is that aiming is affected during this whole routine, which makes accuracy a secondary concern. The Sidewinder is definitely more of a cover-fire kind of blaster than a targeting champ like the Buzz Bee Extreme Range Master.

But aside from the mechanics of its actual use, it’s in the performance realm where things get really interesting for the Buzz Bee Sidewinder. Using the standard foam darts that come with the Sidewinder, we were getting max ranges of about 37 feet, with parallel-to-ground ranges of no more than 35 feet. Sure, these ranges exceed those claimed on the box, but that doesn’t tell the whole story. More often than not, darts would come spiraling out of the muzzle like miniature helicopters on a suicide mission, and it took repeated attempts to come anywhere close to these kinds of ranges.

And when it came to rate-of-fire, things got even more dicey. Ultimately, we managed to fire all 30 darts in 8.2 seconds, for a very solid 3.7 darts-per-second rate-of-fire. But again, this doesn’t tell the whole story. Over and over during our rate-of-fire testing, darts would be left in the drum un-fired, completely skipped-over. In fact, we got through all 30 chambers in 5.9 seconds in one test, but several darts were not shot in the process. So, despite our physical ability to move the handle fast enough for better times, we actually had to slow things down to ensure every dart was actually being fired.

Moving to dart velocity, things did not get much better. Owing to the human-powered nature of this blaster’s firing process, our dart speeds were all over the map, from a low of just 24 feet-per-second, to a high of 55 feet-per-second. But it was the abysmal average of only 41 feet-per-second that was truly disappointing (if not terribly surprising given our similarly disappointing range tests).

So, it’s looking pretty bad for the Sidewinder, if we’re being honest. And to make matters worse, the standard darts packed with the Sidewinder were not holding up well, with several of them having tips that came unglued from their foam bodies. But feeling as though the Sidewinder could do better–and having witnessed the poor flight characteristics of the standard darts over and over again–we decided on a whim just to try out Buzz Bee’s Extreme darts, to see if it would make a difference. And make a difference, it did. If you’re the type of person who thinks darts don’t really matter all that much, and all the real gains can be found in spring, voltage, and other blaster mods, you need to rethink that stance right now. For proof, we present Buzz Bee Sidewinder data using both standard darts, and the denser, heavier (1.67g vs. 1.5g) Buzz Bee Extreme darts:

For those who can’t math, that’s a 23 foot range increase, and a 22 feet-per-second average velocity increase (the max velocity, by the way, was a now very respectable 70 feet-per-second). Let’s repeat: we were within 14 feet of doubling our max range, simply by changing darts. And on top of that, we didn’t have to work nearly as hard to get those ranges. The 37 foot max on the stock darts was almost surely a fluke… many darts would just spiral out of control and only reach half that distance. But by switching to Buzz Bee’s Extreme darts, we could hit 40 and 50 feet all day long, AND maintain a very rapid rate-of-fire. We also saw accuracy increase tremendously, owing to the improved overall consistency.

We’ve seen recommendations on how to improve the Sidewinder that include putting in an air tank, modifying it to become spring-powered, and re-barreling the drum to accept Elites. Forget all that. Just buy some Buzz Bee Extreme Darts and be done with it. You can’t use these darts with every blaster on the market, but for Buzz Bee’s blasters, they’re absolutely the best upgrade you can make.

And that leaves us with a bit of a conundrum, because Buzz Bee themselves, right there on the Sidewinder product page, advise consumers not to use Extreme darts. And we have no idea why. Perhaps there’s an internal mechanism that will wear prematurely with extended use of Extreme darts, or perhaps there’s some concern about the increased performance creating velocities that are unsafe, or perhaps it was just a simple oversight. Whatever the case, use of Extreme darts almost completely redeems the Sidewinder and makes it much more enjoyable to use. So why Extreme darts wouldn’t be recommended–heck, why they wouldn’t be included in the package from the get-go–is beyond us.

Making a value judgment on the Sidewinder is tough. It’s priced reasonably for a blaster that includes 30 darts and that is on the “large” end of things. And we did find it comfortable enough to hold and use, and found it capable of a decent rate-of-fire. We also give it high marks simply for looking bad-ass. But we’re not thrilled about the fact that this is a pump-to-fire blaster with a non-functional trigger, and one that apes the look of existing (and better performing) Nerf products, at that. And to make matters worse, the stock performance of this blaster is quite low, with poor marks for range, accuracy, consistency, and dart velocity, not to mention dart durability.

All that being said, if a purchaser of the Sidewinder were to replace the stock darts with Buzz Bee’s Extreme darts, nearly every performance concern goes away, and the blaster becomes significantly more fun to use. It fires farther, darts hit harder, and both accuracy and consistency are improved substantially. It’s also easier to get consistently high rates-of-fire with fewer mis-fires, and we’ve never had an Extreme dart fall apart.

Unfortunately, however, we can’t judge a product based on what it could be, even if it’s ridiculously simple to improve upon it with almost no effort at all. Instead, we have to render our verdict based on how the product is being presented to the customer, since they can’t be expected to know how the product can be improved upon (nor should they have to pay extra to do so). We like the tactile qualities of the Sidewinder more than most “slam-fire” type blasters, and with the right darts, it was actually a lot of fun to use and performed quite well. As it stands, however, until Buzz Bee replaces those stock darts with better ones, the Sidewinder just doesn’t hit the mark.