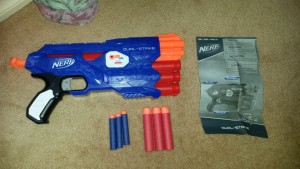 Everything in a Dual-Strike box.

The Dual-Strike is one of the more unusual late 2015/early 2016 releases, a blaster capable of firing two different ammo types and switching between them at will. This system made it very intruiging and presents a lot of potential for modification.

Note that this one belongs to a friend, and as such I may not be able to answer further questions about it as accurately as I would like. 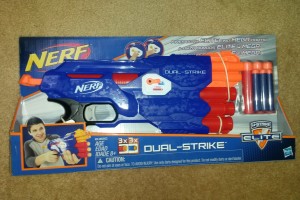 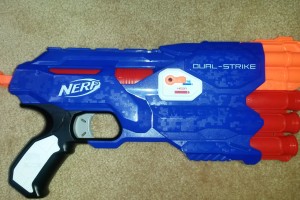 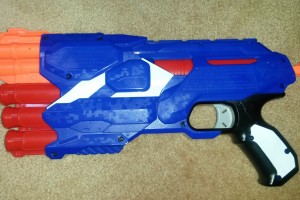 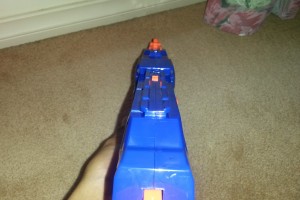 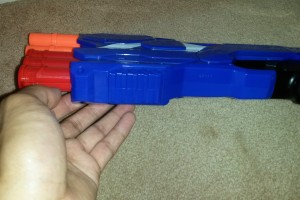 A look at the bottom.

The Dual-Strike is a pretty chunky blaster, especially the bulging front end containing all the barrels. It’s especially and unusually big when taking into account that it is a pistol style blaster. Despite its significant size, it feels a little lacking in terms of shell detail – there is substantially less paint, especially in terms of stylistic design. I think it looks a little bit plain personally. 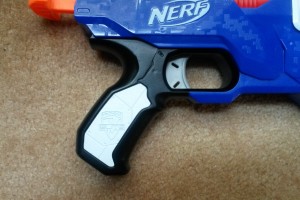 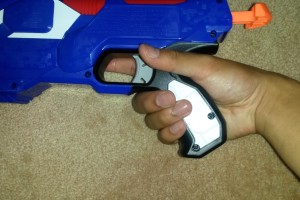 Front edge of the handle.

Back edge of the handle.

The handle is reasonably sized and my hand fits decently well upon it, however I don’t particularly like the Dual-Strike’s handle. I find both the front and rear edges of the handle to be rather sharp and somewhat uncomfortable. Certainly not as bad as some handles I’ve held, but certainly not the best. 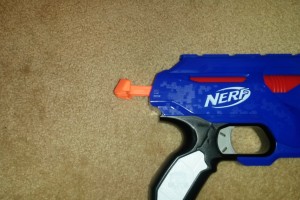 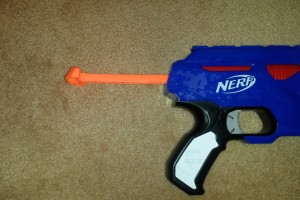 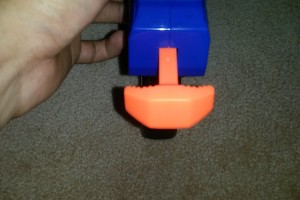 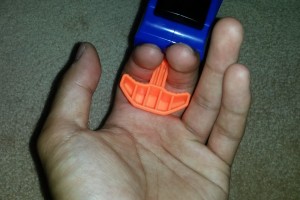 Another look at the priming rod handle.

The Dual-Strike is primed by a simple priming rod, much like many single shots such as the Firestrike. It’s quite a beefy priming rod and is well designed, with the handle being quite easy to grip and pull. 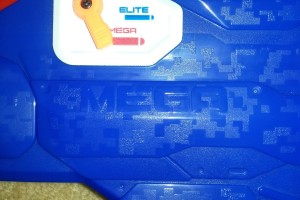 A look at the "MEGA" embossed on the side. 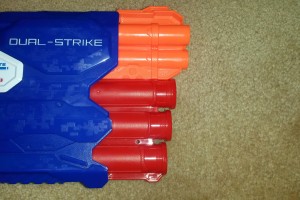 Right side of the barrel block. 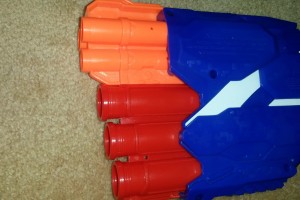 Left side of the barrel block. 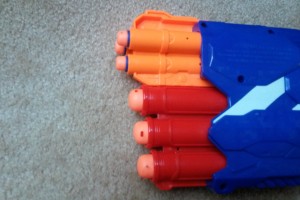 The front of the Dual-Strike is taken up by a bunch of barrels, 3 for each ammo type. The Elite barrels on the top are arranged in a triangle much like a Triad, while the bottom Mega barrels are vertically aligned, like a Thunderbow. The barrels do make for quite a lot of front end height, there’s nothing else in the blaster that would give it such height. 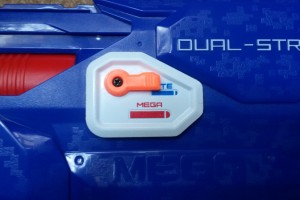 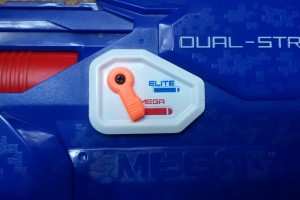 The Dual-Strike switches between Elites and Megas using a simple switch on the right hand side, which rotates a valve internally. It’s relatively easy to actuate, with a good amount of friction to prevent accidental switches and a nice audible click upon switching. 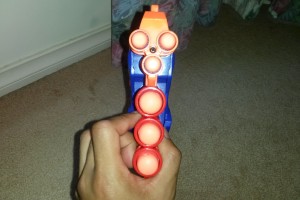 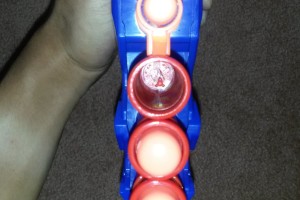 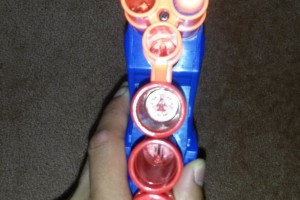 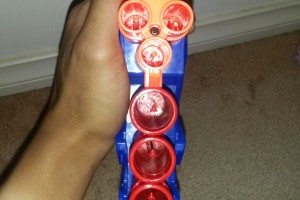 Being that the Dual-Strike uses Smart ARs, all that is necessary to fire all the darts is to prime and fire repeatedly, switching ammo types as necessary. The first darts fired are the right Elite dart and top Mega dart, followed by the bottom Elite and the middle Mega, finished with the left Elite and the bottom Mega. Fairly standard Smart AR progression. 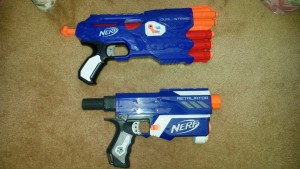 Dual-Strike next to a Retal.

The Dual-Strike is a pretty big blaster, despite its pistol-ish style. Here it’s pictured dwarfing a Retaliator, which is a clip system blaster so in itself is already fairly large for a pistol. 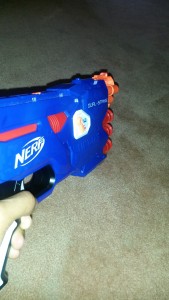 FPS shot of the Dual-Strike.

Elite performance is very erratic. Sometimes the darts will dive into the ground at around 7 metres, while other times they soar to around 14 metres. Megas typically reach around 9-10 metres. They’re more consistent than Elites, but still not the best I’ve seen. There is a fair bit of power behind the Dual-Strike, which gives its Range rating a boost.

Accuracy is quite bad. Although the majority of Elites still pass through my testing doorway (at around 7-8 metres range), beyond that they tend to spread out quite a lot. Megas are also quite inaccurate, I had more of them hit the doorway than pass through. Generally though, if they passed through the doorway, the Megas didn’t spread out too much.

Rate of Fire is not really something you look at the Dual-Strike for, seeing as you have 3 shots before having to switch ammo types or reload. Regardless, I could get off around 2 darts per second.

The Dual-Strike is a bit of an odd blaster – on one hand the ability to switch between Elites and Megas is a very fun gimmick. However I’m struggling to think of a regular Nerfing situation where the Dual-Strike is a good choice. If you want Mega firing, just get (say) a Cycloneshock as it’s superior in just about every way. If you want to be able to fire both Elites and Megas, there are a lot of better, more practical options such as a Stryfe with an integrated Bigshock.

The Dual-Strike is also quite a large blaster. If it were more compact, I would consider it to be a possible sidearm if you have use for both ammo types, but as is I’d say it’s too large to reasonably holster. As such you pretty much have to use it as a primary blaster, further limiting its potential practical use.

The one situation I can think of that suits the Dual-Strike best is one where each player is limited only to a single smaller or low capacity blaster, and Megas are desired for use on specific targets, but are too uncommon to use on regular enemies (on which Elites are used instead). This is however a very specific and narrow situation. Overall I can’t think of any situation in which the Dual-Strike is a good choice, where the situation hasn’t been designed specifically for it to excel.

The Dual-Strike can be found for 29AUD at Kmart, and can drop down to 25AUD on sale. I personally find it to be rather overpriced. Although you could argue that it is effectively two blasters in one, the fact remains that there are a number of alternative choices that I think present better value for money. Even for its sale price of 25AUD, you can get 2 Strongarms (plus maybe some spare darts), 3 Triads or a Cycloneshock or Flipfury. The only real advantages that the Dual-Strike offer are the ability to easily switch between two barrels/barrel sets/etc, and its huge plunger tube (see just below). Overall, I’d say that you should give the stock Dual-Strike a pass, and put your money into something better like a Cycloneshock or Flipfury.

What’s immediately apparent upon opening a Dual-Strike is the plethora of air release holes that allow the firing of both Elites and Megas within legal power (with regards to legality of retailing). Another set of holes through the barrels keeps them at roughly equal power – if not for them, the first shot would be the most powerful and the final shot would be the least. The plunger tube also has slits that effectively shorten the effective plunger tube space substantially. The simple act of plugging up all of the holes and slits with e-tape substantially improves performance – Elites start to fly more consistently to beyond 15 metres, while Megas typically reach 12-13 metres.

The Dual-Strike has a massive plunger tube. If you forego the Smart AR system, you can get some serious power out of a single barrel, provided you seal off all of the holes and slits. A spring addition and a good barrel could easily get you beyond 150fps muzzle velocities, easily up to and beyond the “superstock” limits that I usually play with. Some bigger springs and the right darts could get you beyond 250fps.

A link to the review on my own blog: link