The Nerf Rival Nemesis MXVII-10K has now officially been revealed to Popular Mechanics and one of their writers even got to try one out!  Although most information regarding the Nemesis was already known, due to the leaks, there are some other key details about this blaster you may like to know. 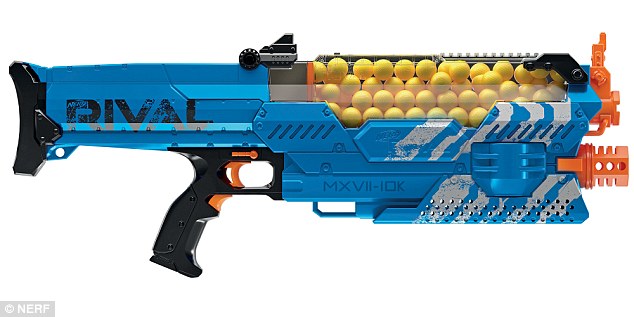 As we expected, the Nemesis is a flywheel operated blaster that uses a gravity-feeding hopper. Surprisingly, the hopper is also removable. The Nemesis will cost $100 USD and will require six D batteries or the new rechargeable Rival battery. The Rival battery has been said to be more powerful than six D batteries as well as being lighter too. From the Popular Mechanics’ video, it appears that the Nemesis has a faster fire rate than the Khaos. The Nemesis will be set for release this fall and will also be displayed at the upcoming New York Toy Fair next month.

Check out Popular Mechanics’ video on the blaster.

Nerf YouTube reviewer, ‘Lord Draconical’ also managed to get his hands on the new full-auto blaster, giving it a very good review and noted that the Nemesis was roughly the same size as the Khaos.

Being a 100-round, full auto, hopper fed Rival Nerf blaster, how can this blaster not be the most anticipated blaster of the year?