Here at Blasterhub,  we usually focus on things like dart and water blasters. There are a few related items, however, that don’t always get a lot of attention. Laser tag has been around for quite a while, and since Bazookafied ended his blog, I really haven’t seen much on the topic. Today’s post considers not a store-bought product, but rather an expanding indoor laser tag fanchise. Hard Knocks is up to seven currently open locations in the eastern half of the United States, with more opening soon. Here are my thoughts.

Immediately upon entering the facility or looking at the website, you can tell that Hard Knocks is skipping the space-age laser tag setting and going for the standard first-person shooter feel. All the equipment used is of the police training type, resembling real firearms. There are no goals to shoot for points or special weapon upgrades for tagging enough people in a row. 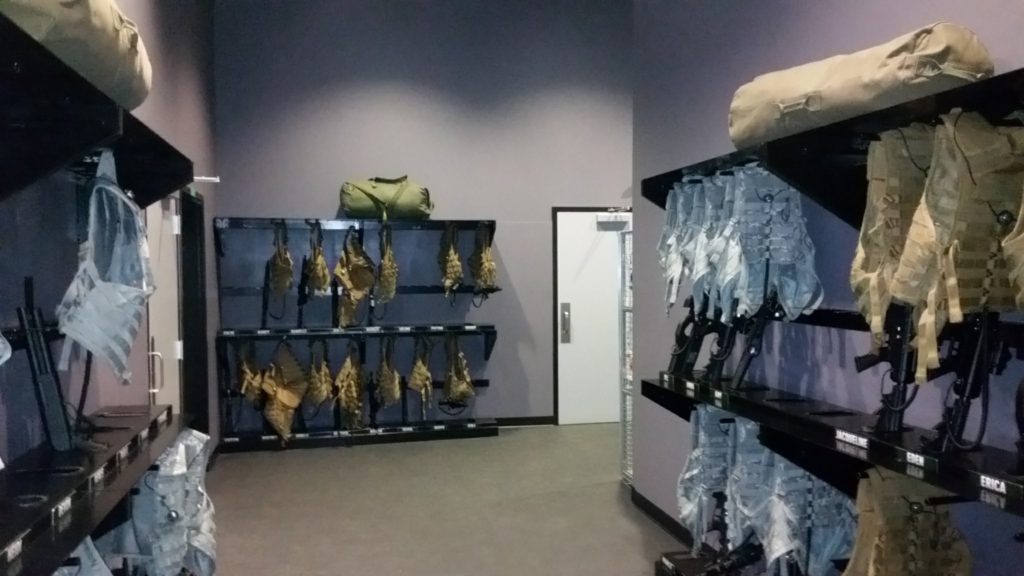 Each player has a vest with three sensors; larger guns also have a mounted sensor. You start with (usually) ten lives each, respawning two seconds after each hit and playing until either all lives are lost or all ammo is used. Yes, you start with a limited number of “clips” and, barring game type rules, cannot get more shots.

The arenas are not unlike what you’d see in an online PvP map, or an airsoft arena. There are warehouse, office building, and house play areas. On especially busy days with lots of people playing (or with group reservations), the play areas can all be opened up into one large arena. Usually, though, there are games taking place in all three areas. All play areas are low-light settings, and you can easily see both blaster fire and vests lighting up after hits. 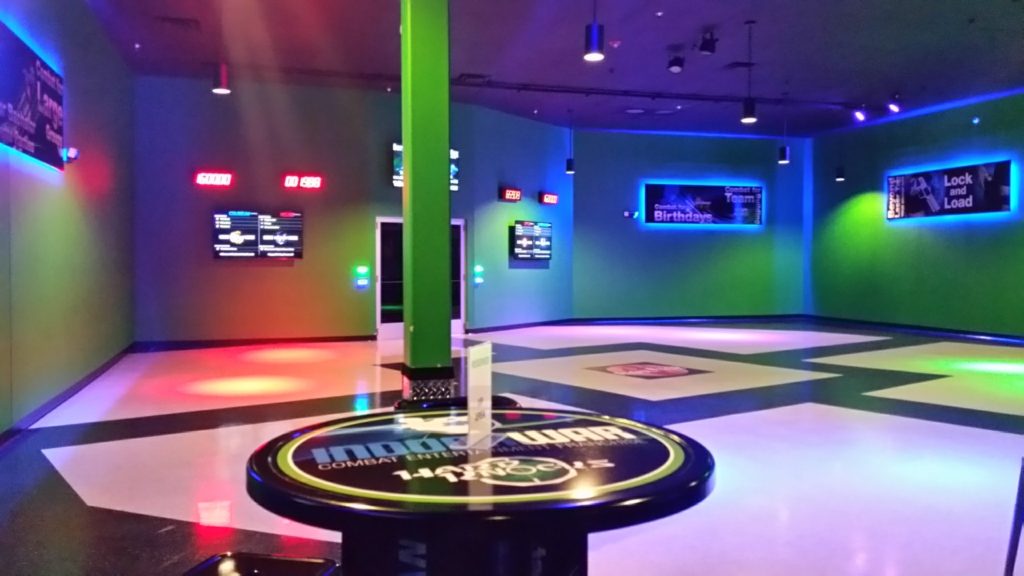 Sitting at one of the tables, with a pillar conveniently blocking the view of the arena entrance.

The lobbies are of course well lit and clean, with plenty of branding adorning the walls. For people not currently playing, there are screens showing different sports networks – chances are there’s a game of some kind playing. In addition, there are split screens with camera feeds from the play areas for watching your teammates play. Of course, a concession stand completes the experience, serving basic food, fountain drinks, and alcoholic beverages for those 21 and over.

Gameplay – FRIENDLY FIRE IS ALWAYS ON

The actual draw of the facility, laser tag, is one of the best I’ve ever come across. The vests are adjustable in fit, the tagging equipment is regularly cleaned and recharged, and it all works. The last part should be obvious, but I’ve seen many places with half the equipment being faulty in some way. More importantly, barring some reserved event, walk-on players are always welcome. No need to bring a group with you, although I would question why you aren’t trying to shoot your friends…? 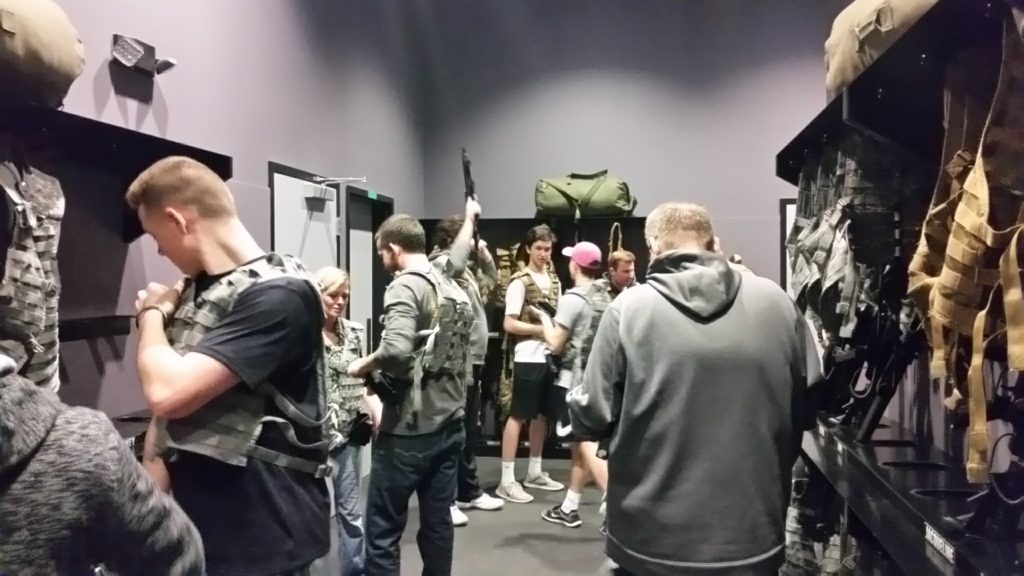 In the prep area, picking the guns. They all have clearly labeled names, and you’d better put them back where they came from!

There are several weapons from which to choose. Pistols are shorter in range, but they can fire rapidly with a healthy number of shots each. They can also reach around corners without exposing the user, since they don’t have sensors on them. Shotguns are slow to reload and only have 40 shots total, but their wide lenses and super bright IR emitters mean that they can hit multiple people at once, and often from across the entire arena. Several flavors of imitation machine gun and assault rifle are also available, depending on the franchise location. Most have the extra tagging sensor mounted on top, but they also feature automatic fire and some type of ACOG. All guns suit particular playstyles, and have theoretical strengths and weaknesses.

And on the Field…

One teammate, shortly before his demise.

In practice, the setup works fairly well. Pistols are great in close quarters, but can’t hit targets that are too far away. Automatic laser tag equipment is great for suppression or for hitting people on the move. The extra tagging sensor also prevents it from giving an unfair advantage. Players can target the blaster itself even if the user is behind cover. It also prevents issues that may arise from a large weapon shielding part of the user’s vest. The emitters are set up for longer range shots with narrow fields of fire, providing for great accuracy.

Shotguns are a mixed bag, and they largely depend on the person using them. Between the large targeting field and the fact that FRIENDLY FIRE IS ON, players can hit five or six opponents, or they could hit their own teammates. In addition, the brightness of the emitter and the low-light setting of the arena can cause issues with light reflecting off of walls and still being bright enough to trigger vests of people behind cover. As it stands, however, the forty shot limit and slow reloading seems to be perfect for balance purposes. AND FOR THE LOVE OF GOD, PUT THE SHOTGUN USER IN FRONT OF YOUR TEAM.

If you’ve seen it in an online shooter or a Nerf war, chances are you’ll be playing it here too. All the game types have names, but they do boil down to FFA, Team Deathmatch, VIP rounds, etc. Some modes will have extra twists; “Resurrection” gives everyone a glowstick they can turn in upon death for another free set of lives and ammo. “Sabotage” picks one player on each team to be a traitor, and if they manage to be the last man standing in the entire game, they can win a free game. Some modes start teammates behind enemy lines. “Revenge” turns the first few people eliminated into their own, third team that the starting teams now have to fight in addition to each other. You just have to show up and try them all to see what you like.

Hard Knocks is geared toward the “membership” type of pricing – annual membership as of this post was $5.99 at my location. Basically, if you plan on ever visiting more than once, it’s cheaper to do the membership and have your own card to load games on. Eight missions was (again, prices will vary) $33.99 for members, while visitors can buy six for $36.99. Sound weird? It shouldn’t. Places like Kroger have been doing this for years, with items being ” ON SALE FOR $3.99 WITH YOUR PLUS CARD”. So it’s not like its a new concept. Doing it this way just means they can sign you up for the newsletter, email deals for different holidays, etc. 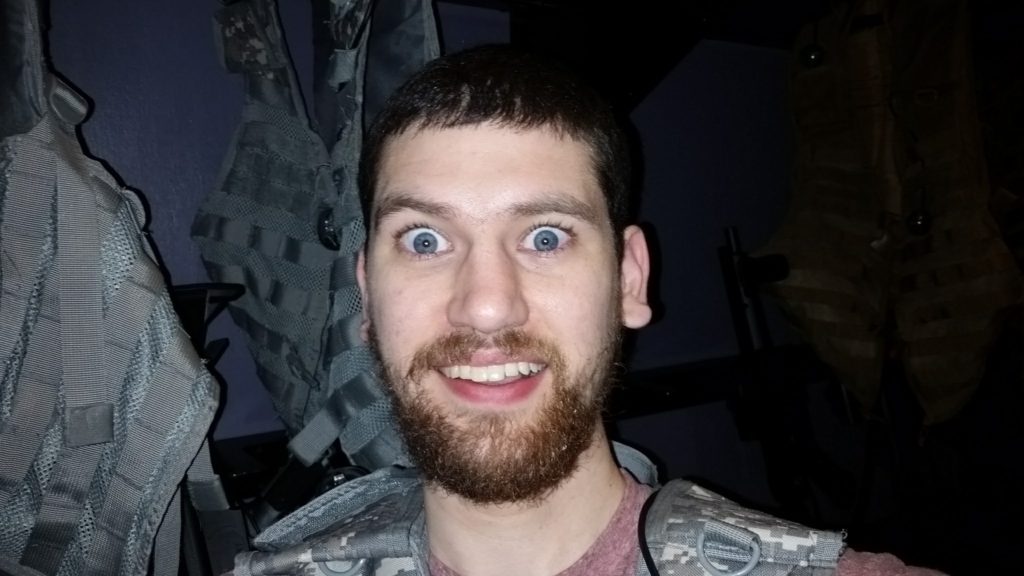 Clearly, I was running on a lot of caffeine that day.

Perhaps because of the FPS theme, I’ve played with people of all ages, from elementary school to college to my parents’ age. Everyone there, myself included, has fun. In the end, that’s really all there is to it. Rounds can be over in mere minutes, or you could take a quarter of an hour making slow advances and still end in a draw. Regardless of game type, weapons used, and people playing, the end result is nothing short of a good time. Weekends are obviously the best times for large numbers of players, but Hard Knocks is there any day of the week for a bit of stress relief.

A map of both open and soon-to-open franchises can be found HERE.