Here we are, a month away from the official release of Nerf’s fall lineup. Many new blasters have appeared, but none with quite so much hype as the Nemesis. Perhaps the ultimate evolution of the Rival line, it meshes the foam blaster and paintball worlds together in a full-auto, hopper fed package. The Nemesis also demands a hefty price tag of $99 here in the United States. Luckily, it’s worth every cent. 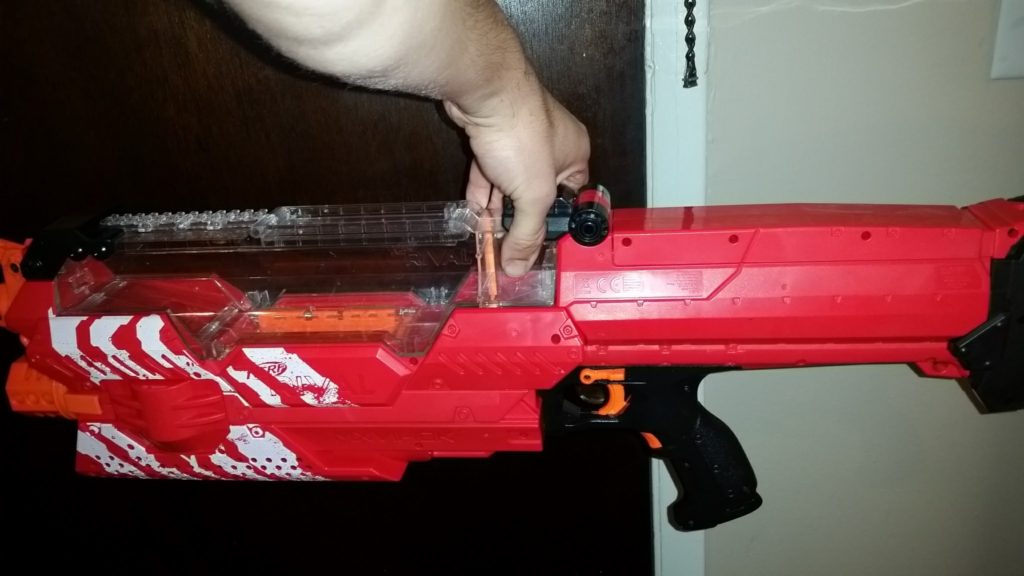 The Nemesis is not a blaster meant for little kids. Ignore the fact that the Rival line has been marketed toward older children and teens as a paintball alternative. Just picking up the blaster will tell you all you need to know; it’s over six pounds with batteries, and over 28″ long. Indeed, the Nemesis is not a blaster your tiny cousin will be using all day. Unless your cousin is an insanely strong beast, or some kind of young bodybuilder. Or secretly the son of the Incredible Hulk. 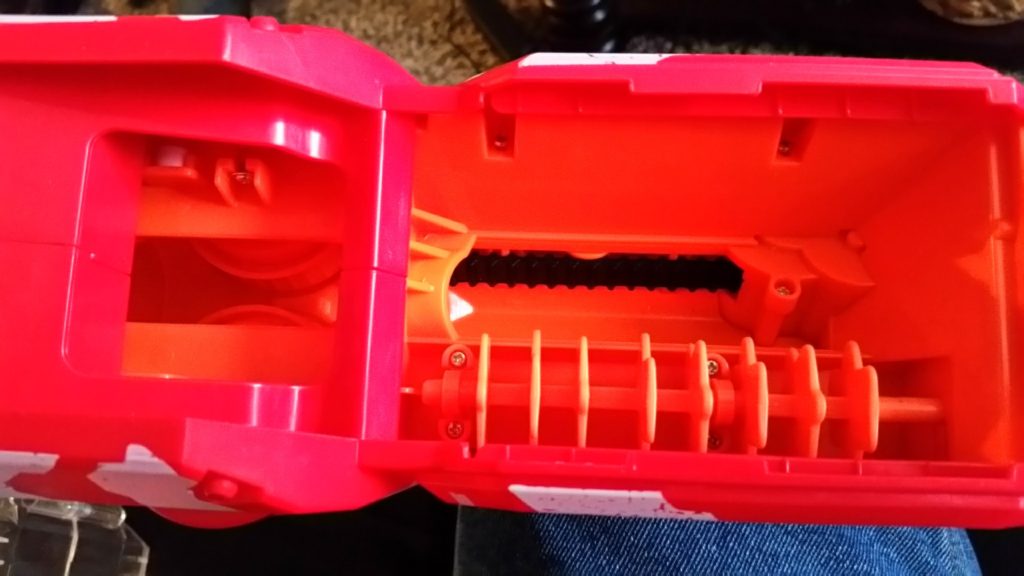 Size issues aside, the large footprint also means lots of ammo storage. The hopper holds 100 Rival rounds, more than doubling the capacity of the Khaos (although the latter does use magazines). The balls are fed into the flywheels by a combination agitator/belt system. The agitator keeps the balls from getting stuck in the hopper, and the belt carries the balls at the bottom forward for firing. While the system is sound, you can still on occasion get balls stuck (nothing a quick shake is unable to dislodge). That’s simply the nature of using gravity to feed the ammo instead of a spring-loaded magazine.

A door at the top of the hopper is used for putting loose balls into the hopper for reloading. The opening is narrow, and hardcore players may prefer to replace it with a paintball-style loading door, but for most people it works just fine. Quite frankly, it’s hard to trash something that already works, simply because you want to be able to load and fire ammo at obscene rates. 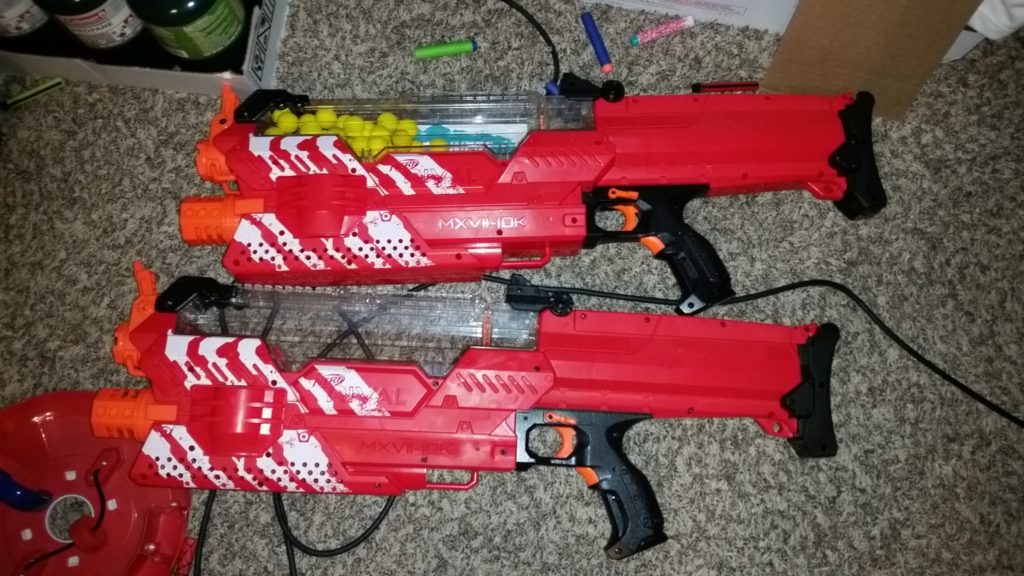 I’ve had a Nemesis in my possession now for close to four weeks. While I later received one in the mail from Hasbro for review, I felt at the time that it would do more justice to drive across the border to Canada to buy one. In short, why shouldn’t I put my own skin in the game for such an important release? Since then, that first Nemesis has been to several wars as well as the HvZ event known as Endwar.

Stock performance was everything the box advertised, with 90-100 fps shots on fresh batteries, and controllable full auto. As a player who wants to conserve ammo and make shots count, being able to tap the trigger without dumping a quarter of the hopper was a major plus. Even playing against people with well-modified blasters, the Nemesis held its own. It’s not the perfect blaster for all situations, as Rival balls have inherent range limitations and flight characteristics. As an electric flywheel blaster, it also has zero stealth. But given sufficient ammo, one could conceivably use a Nemesis for the entire war, if they don’t mind all the weight. Also, the shots are extremely accurate.

After a rewire and other upgrades, I ran the Nemesis off a 3S lipo for the next two wars. Here, the Nemesis became even stronger in terms of range, ammo velocity, and rate of fire. However, with all the extra power, it became impossible to simply let off single shots, which irked me to no end. That would soon be rectified. 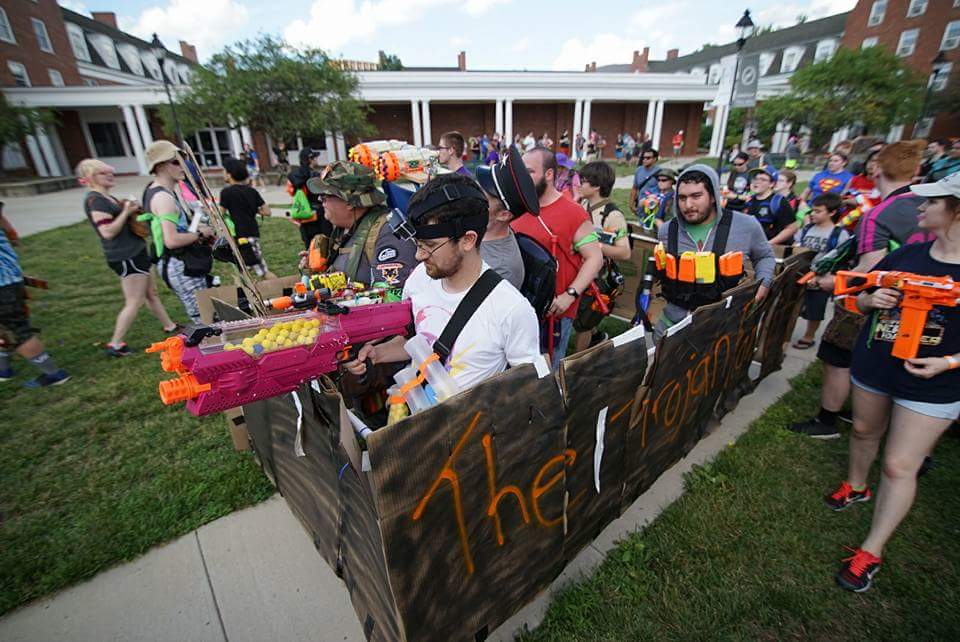 By the time of Endwar, a happy accident forced my hand; I broke off one of the tabs to the agitator/belt pusher motor (oops). As a result, I chose to replace it with an MTB Wolverine Mk2, a 180-sized motor meant to be powered by a 2S lipo. As such, I also had to add a buck converter in order to lower the voltage feeding it to around 6.5V. This solved all my rate of fire issues, as I could now once again reliably single-shot targets while using full auto in a pinch. You can watch the video to see how well my Nemesis performed.

As with all HvZ games, how long humans survive depends more on their awareness and lack of mistakes than the blasters being used. Even so, having a high-capacity blaster that, with care, didn’t need constant reloading was a great advantage. Just imagine all the players with expanded hoppers that held much more ammo! It’s not game-breaking, but it is a new development. It will require some extra thought when it comes to game design.

In all reality, the use of pulse-width modulation (PWM) to control the rate of fire would make a group of Nemesis users a real force to be reckoned with. At least until all those shield-bearing zombies show up.

I don’t have complete footage, but in Mission Two, the Nemesis made the difference. Four occupants had to carry the Trojan Rabbit tank across a 500+ ft. green space on campus. Zombies could take flags off the tank, disabling it until occupants got out, retrieved the flags, and came back to attach them. We never had to stop until we reached the “drawbridge”, at which point I could reload. Then, when running back, the Nemesis (while heavy), still shot fast enough to fight its way through hordes of zombies. If I hadn’t made a mistake in not seeing a player on the left at about the 470 ft. mark, I would’ve survived what was meant to be a suicide mission. Running with the upgraded rate of fire would have made that situation much harder, if not impossible. FUTURE NEMESIS MODDERS MUST KEEP THIS IN MIND.

The Nemesis is everything I expected and more. I realize that $99.99 is expensive. Plenty of less expensive, dart-firing blasters exist that can make you happy when it comes to rate of fire, range, and many other qualities. But if you’re willing to invest in a Rival platform, THIS IS THE BLASTER YOU NEED. I honestly can’t think of a way in which it can truly disappoint you, even in stock form.