Of all the things to show up on my birthday! Getting a message from Fedex that a package was ready for pickup was nice. Then I opened it up and found the newest versions of the Pyragon and Vigilon! Since we’re on a roll here, I may as well do a review of the Pyragon first, comparing it to the old version and doing an actual review.

As expected for a Vortex blaster, it’s lots of fun (even if it’s not always competitive in superstock settings). It’s just a matter of whether your desire for a unique take on a formerly discontinued product outweighs your budget concerns, 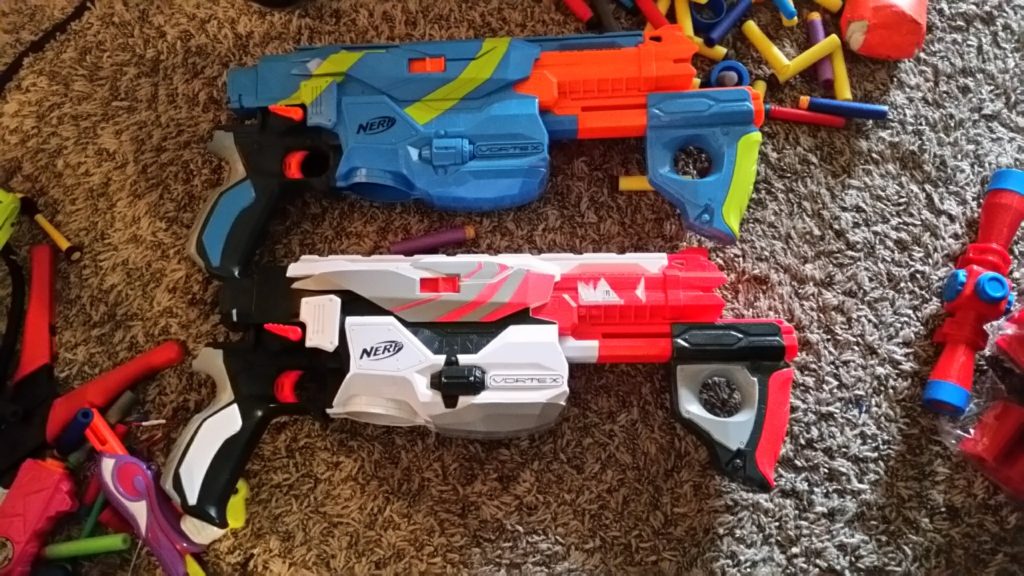 The VTX Pyragon is the exact same as the last release, in terms of form and function. That’s really what it comes down to – Hasbro saw a demand and an opportunity for a store-exclusive rerelease (at Target here in the United States), and broke out the old molds. The paint scheme is much simpler this time around, however – while the shell details are still present, the colors have been reduced to mainly blue, with green stripes. It still looks nice, though. 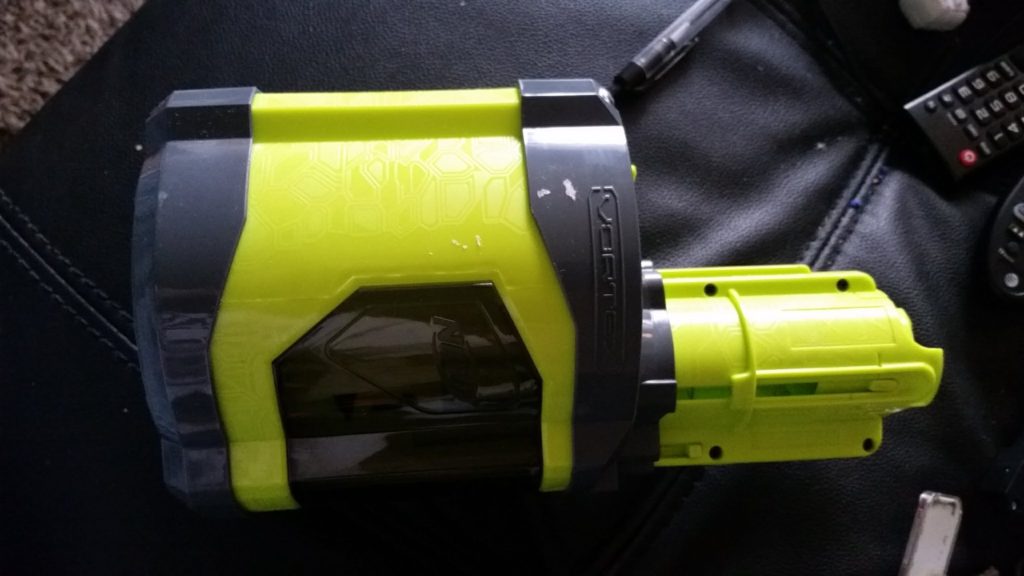 The drum, meanwhile, is the same as the last one, just in green and grey. You load 19 discs, then flick the drum loading lever three times to load the last 21 discs, for a total of 40.

I would open up the blaster for internal pics, but literally everything feels the same, from priming force to the velocity of the discs at launch (if memory serves, stock Pyragons shoot discs out at around 60fps). As such, I’ll leave it to Google to provide you such pics. In any case, it’s the same basic propulsion mechanism as most Vortex blasters – a throwing arm hits the inside of the disc to fire it forward, with a large torsion spring providing the energy storage.

And yes, slam-fire is STILL built-in. You can spam clouds of discs to your heart’s content. 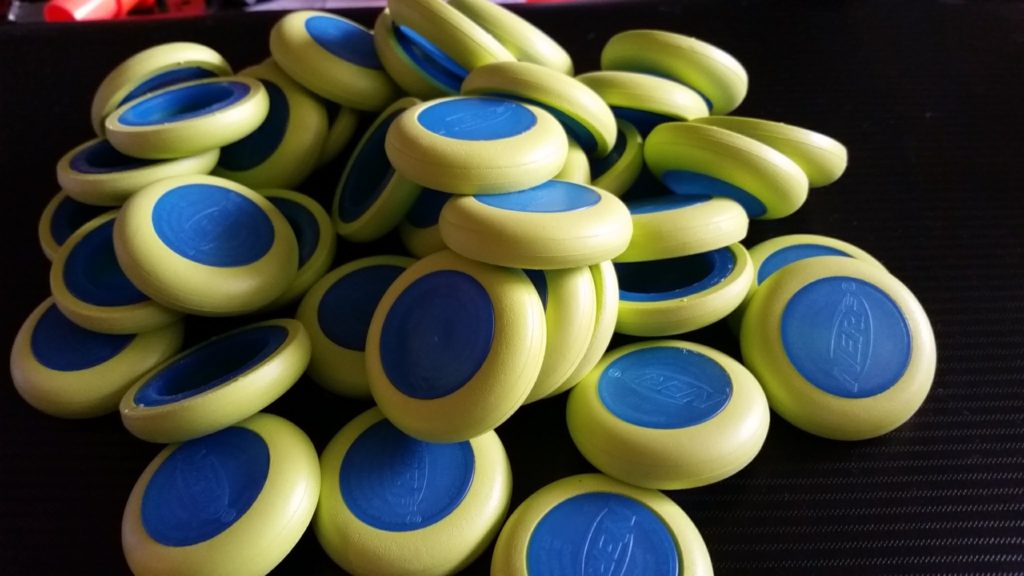 If there’s one thing to be happy about in this rerelease, it’s the availability of official Vortex ammo. Reproductions available online from various sources tend to be hit and miss in terms of compatibility. Sometimes the flexible plastic inserts are too large or small and don’t properly engage the safety mechanisms within the blasters. Other times, the disc tolerances are too great for complicated blasters like the Revonix 360 to handle without jamming.

The new VTX discs, however, are NICE. Light green foam on the outside. Slightly translucent blue plastic inserts. They’re very pleasing to the eye, and easy to track when you fire them. 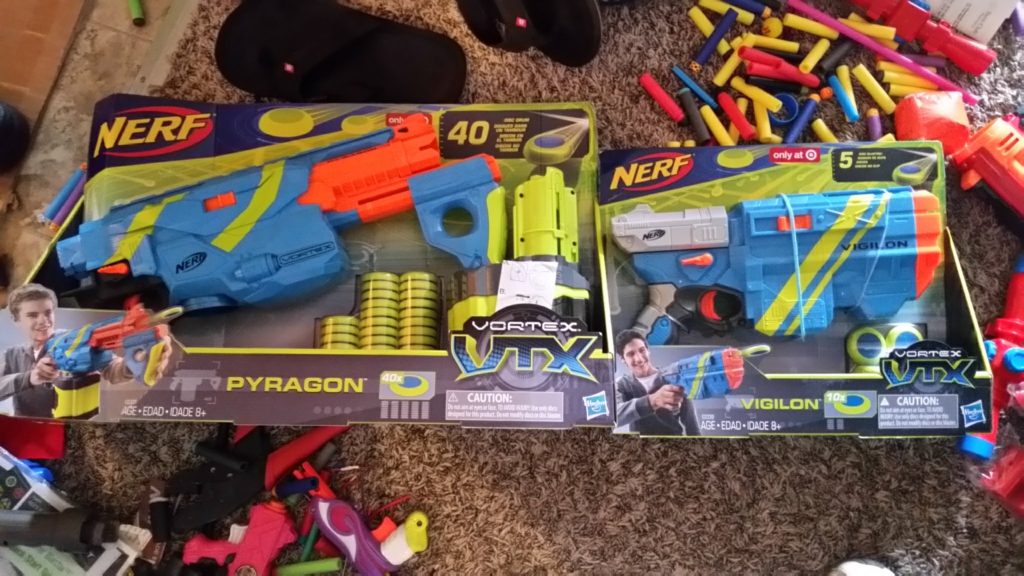 Vortex blasters are a niche breed in the toy blaster population. The discs actually glide instead of following the (roughly) parabolic path that darts do. You can put up clouds of ammo that your opponents find hard to dodge. And while Vortex is a rarity in superstock settings, it’s still a fun and usable platform in everyday use, and especially in HvZ settings (I ran a Pyragon roughly half the time at my last HvZ Invitational).

The only issue with this Target-exclusive reproduction, however, is price. The original Pyragon retailed for $40 on release. This time around, the MSRP is $60. A 50% increase isn’t a small chunk of change, especially when upcoming blasters like the Infinus are expected to retail near $70. I’m not sure of the reasoning for the price increase, especially when there’s essentially zero development cost (perhaps Target wanted a limited run to keep shelf space open, as opposed to the overwhelming flood of merchandise that sat on shelves and killed the line last time?).

If you’re a big fan of the Vortex, brand, however, the Pyragon works well and is a joy to fire, both with single shots and with slam-fire walls of discs. Expect to see them on Target shelves soon!