(Video below, showing the feeding action. If it doesn’t load, link here)

The Infinus is named because of it’s “infinite” capacity. Using the dart loading ramp, a user can feed darts into the magazine without extracting it. Inserting the dart presses a button to turn on the feed motor, and once inside, a different motor turns on to push the dart between the lips of the magazine. If you use the included 30-dart drum, the blaster will even count the ammo fed into an empty drum, and warn you when the drum is full. When you run out of darts, you are warned. If somehow a jam does occur, you’ll also be warned. 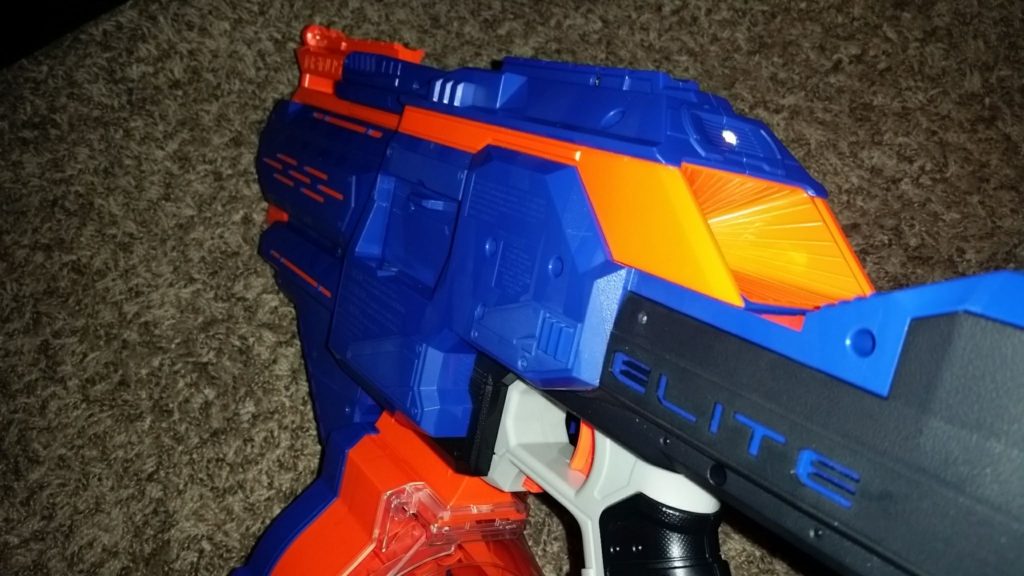 The Infinus has a three-color LED sitting above the dart feeder. Green = having darts and ready to fire. Yellow means you’re out. Red means something is wrong (could be as simple as the jam door being open), and you should fix the issue.

The red light very rarely comes on, but it happens most often when not using the 30-dart drum. The blaster doesn’t know the capacity, so it can’t cut off how many darts you feed into it. If you overload the magazine, the blaster will detect it and make you fix it. Best not be careless with all your 18-rounders!

The only other issue I had was with a few worn darts getting stuck 3/4 of the way into the feeding “tube”. There’s a sweet spot where the dart isn’t pressing the feed button, but isn’t pressing the switch for the next step. If a worn dart gets stuck here (wheels are slipping on the dart), the circuit times out. Just put another dart in the tube to move both darts, and the blaster will feed both darts, one after the other. How useful! 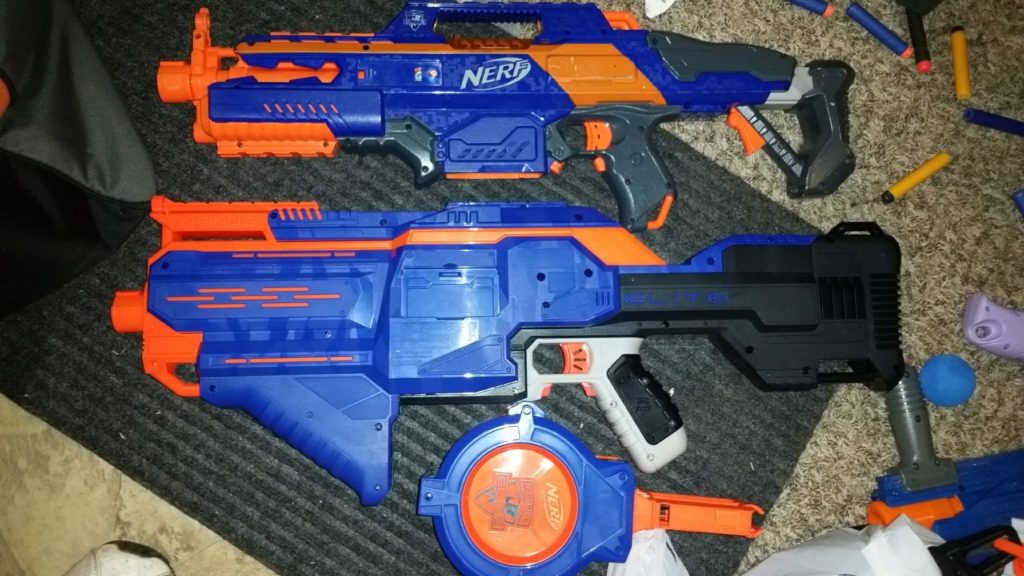 The Infinus is chunkier than the Rapidstrike, but is very similar in length. While the main handle is simple in design, it is large enough for most hands. The angled foregrip is very comfortable to use, and the 4 “D” batteries in the stock help keep the blaster balanced. There are two rails on top for assorted accessories, as well as a barrel adapter. You have sling attachment points, but the blaster doesn’t really need one unless the user is young. 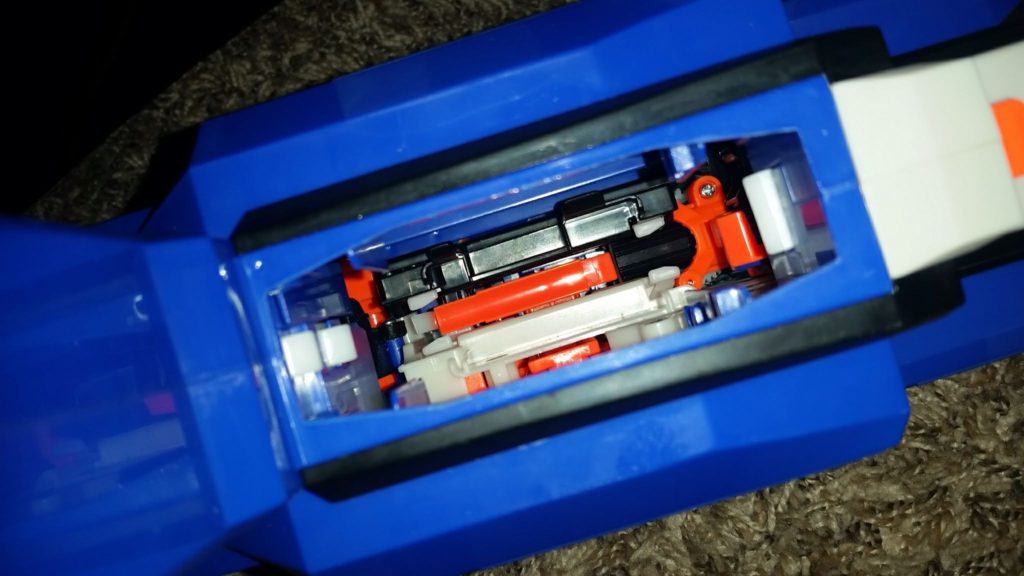 The first switch on the left lines up with a slot on the 30-dart drum, and is what enables the internal dart counting. But only with that drum.

Aside from the dart loader, blaster operation is exactly like that of a Rapidstrike. You depress the lower acceleration trigger to rev up the flywheel motors. You then depress the main trigger to feed darts into the flywheels. You can press the trigger down once for a single shot, or hold it for multiple darts. Once you release the main trigger, the pusher assembly will complete its cycle and reset. Interestingly, if you’re out of darts, the pusher will cycle once, then stop, even if you hold down the trigger.

Fun fact: there’s actually an IR diode and detector contained within the magazine well, lined up with the top dart. That’s what the blaster uses to detect when any magazine is empty.

What can I say, other than the blaster functions like a Rapidstrike? Mine topped off at 65fps single shots, although based on other reviews, I may just be on the low end. In addition, the full-auto does between 3 and 4 darts per second, but doing so bogs down the motors; later shots can drop to the lower 50s in feet per second. It’s not entirely unexpected from a fully automatic dart blaster.

As far as stock dart blasters are concerned, the Infinus performs very nicely. The reloading mechanism works exactly as claimed, and works well. In addition, the blaster unit itself has good performance.

At $70, the Infinus is very much the main dart blaster of the Fall 2018 product line. It just so happens to be worth the money. 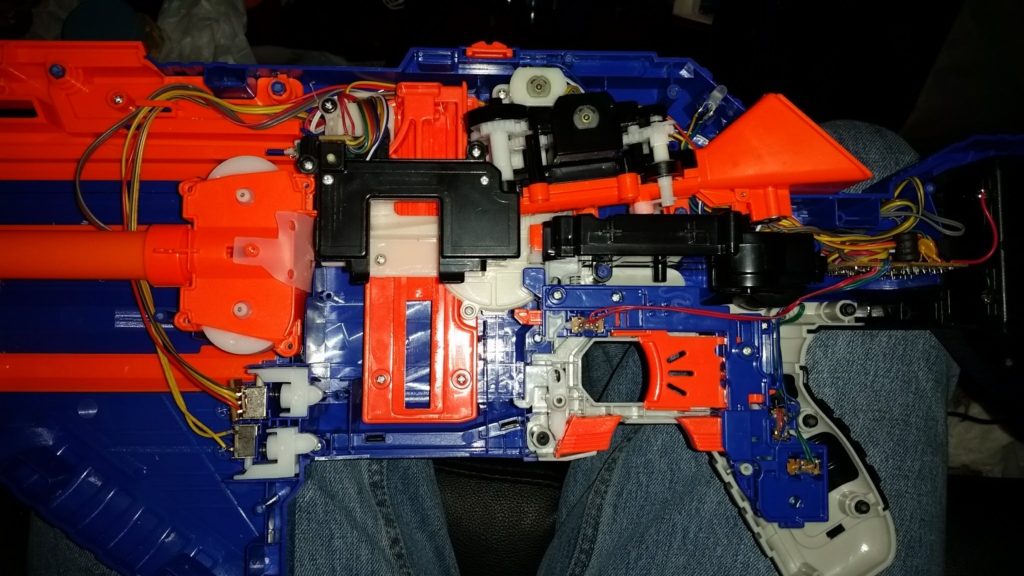 For our enhancement-oriented fans, the inside of the Infinus is…complicated, to say the least. There are wires running everywhere, and a large control board in the rear, by the battery tray. Like they say, open at your own risk?