I have to apologize, because I’ve been sitting on this review for nearly four months! It’s been sitting unfinished in my “Drafts” section, only to be overshadowed by new blasters coming out, or pushed off when life put a hold on writing. And that’s a shame, because it’s an amazing blaster for such a small package. A four dart revolver with an auto-indexing cylinder, it performs the exact same function as the Nerf Quadrant/Scout Mk II, but in a smaller package. Even more importantly, it has better performance for half the price! 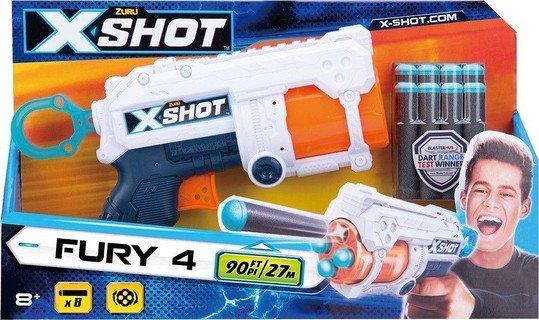 The Fury 4 is simple in operation. Like the other pistols in the line, the Fury 4 is primed by a translucent plastic rod. A small rotation mechanism sits under the plunger tube, turning the cylinder on the prime. Pressing the trigger fires the blaster and the (presumably loaded) dart.

The shell is solidly made, with plenty of texture to the grip and details in the molding. The handle is on the small side, but it’s adequate for normal use – this is a blaster meant for packing power into a small package, not a primary-type blaster.

The Fury 4 performs far better than the Elite Scout Mk II and the Accustrike Quadrant, the two Nerf blasters performing the same function. With the included darts, the Fury 4 hits 82 feet per second average velocities through my chronograph. With Nerf Elite darts, it hits a still-respectable 77 fps.

There’s not much more to write about. It’s a simple blaster, with a simple purpose, and it does it beautifully. The included darts, as per usual for Xshot, are designed more for distance than accuracy, but it’ll fire more accurate dart types with decent power.

The Xshot Fury 4 is a simple and inexpensive option if you need a good sidearm fast. It’s small, powerful, and easy to find (now just $5 on the “cheap toy” section of the shelf at Walmart.