In the grand tradition of rereleasing blasters in a new color palette, Hasbro has decided to bring back the Rapidstrike in orange. A Walmart exclusive, the Stratohawk is billed as the first electronic Accustrike blaster. Aside from the paint scheme and the darts, however, nothing about the blaster has really changed. And that’s a good thing! 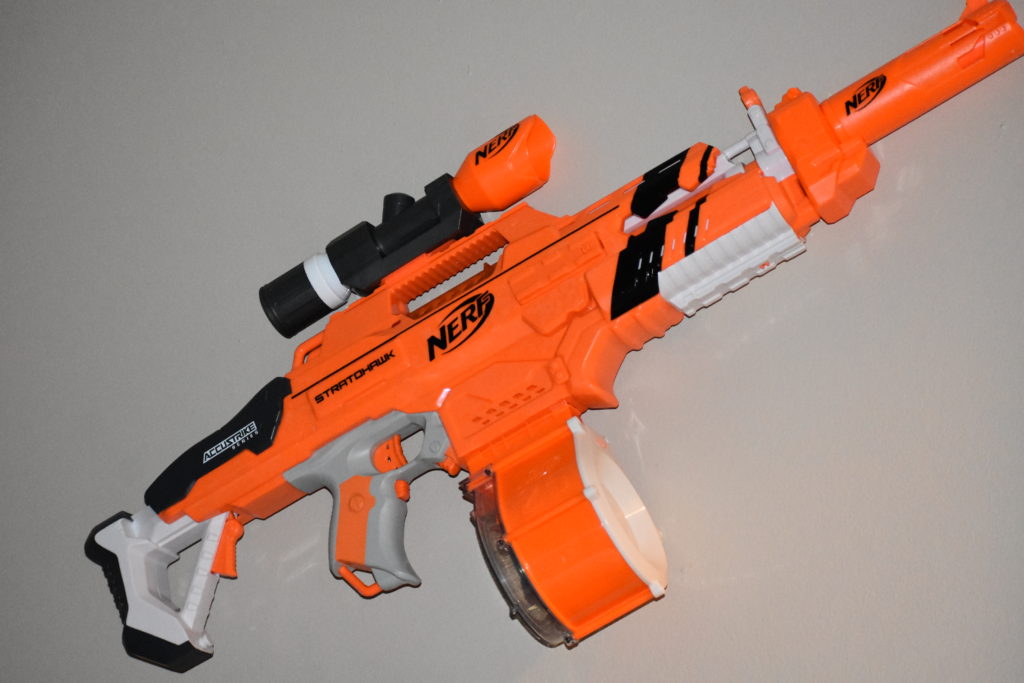 The Rapidstrike is beloved among Nerfers due to the great stock performance and the versatility it offers when modified. It has ample battery space, a robust dart pusher design that can withstand high speeds, and a flywheel system that can be replaced for better parts. The Stratohawk offers a little bit extra on top of all that.

This version comes with two attachments – a repainted Modulus scope and barrel are included. There is also a new 25-round drum, for sustained rate of fire. Just in case you thought the original 18-round stick magazines weren’t enough.

As per the original, the Stratohawk is fully automatic. Pull the rev trigger to start the flywheel motors, then pull the main trigger to cycle the dart pusher. All of this runs off of 4 “C” batteries, loaded into the tray within the foregrip. An extendable stock sits at the back (there are really only two options – all the way out, and all the way in). If you really decide you need it, the flip-up sight is still at the front.

The Stratohawk still performs well within Elite standards, even on full auto. Single shots with the Accustrike darts averaged 70 feet per second in my tests. Full auto firing resulted in a still-respectable average of 66fps. Rate of fire was also very respectable, seeing four darts per second on full batteries.

The Stratohawk has the same internals as the Rapidstrike. Several switches sit inside, whether for the triggers themselves or for the various safeties (magazine presence, jam door closed). The pusher box, with the blaster’s third motor and a cycle control switch, is still intact. If you’re looking to modify the blaster for better performance, all the same things you did before will apply here.

Funny enough, the plastic piece that contains the sliding stock is still blue. Why repaint an old part that you normally don’t see anyway?

The Stratohawk may have a few extras, but at its core, it’s still a Rapidstrike. That’s perfectly fine, as the original blaster was also great. The only turnoff may be price – the MSRP is $70, barring any markdowns in price (I snagged mine for $60 before tax). That’s the same MSRP as the Infinus, which not only fires darts using the same mechanisms, but also features auto-reloading of darts. It’s also a larger blaster with far more complicated internals that, in theory, should be more expensive.

This doesn’t make the Stratohawk a bad choice, but it does bring some perspective to things. Figure out what you really want, and enjoy it – and if it’s on sale, then enjoy the savings, as well!