We had a reasonable turnout and great weather today, and we were able to do several good games. 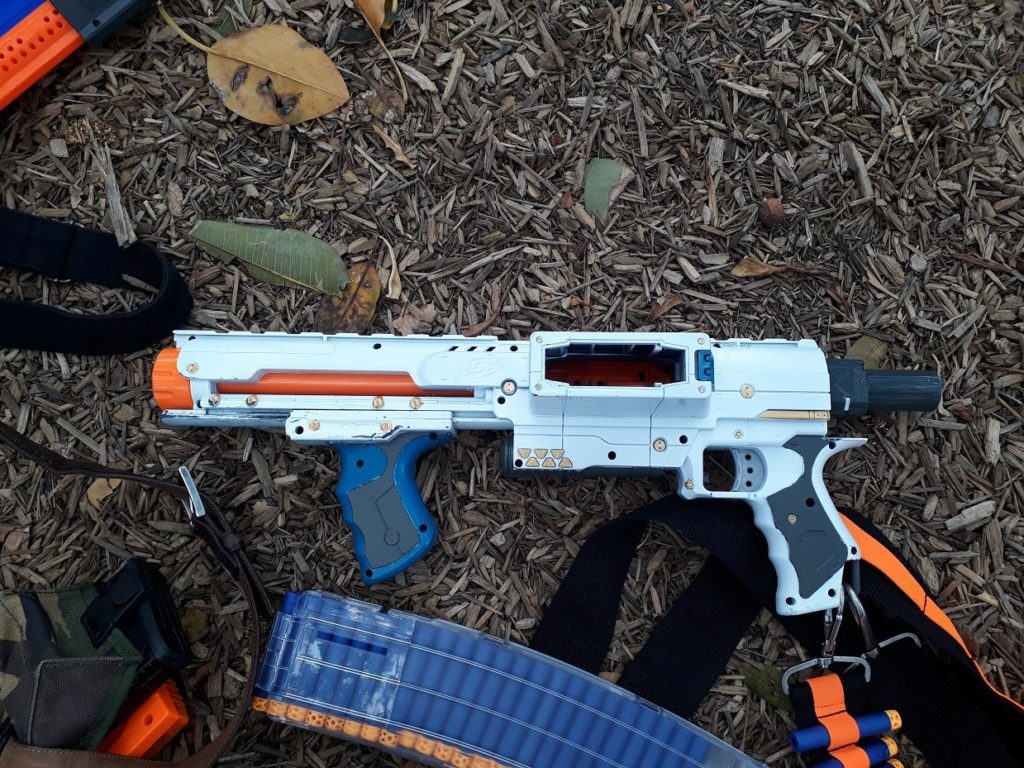 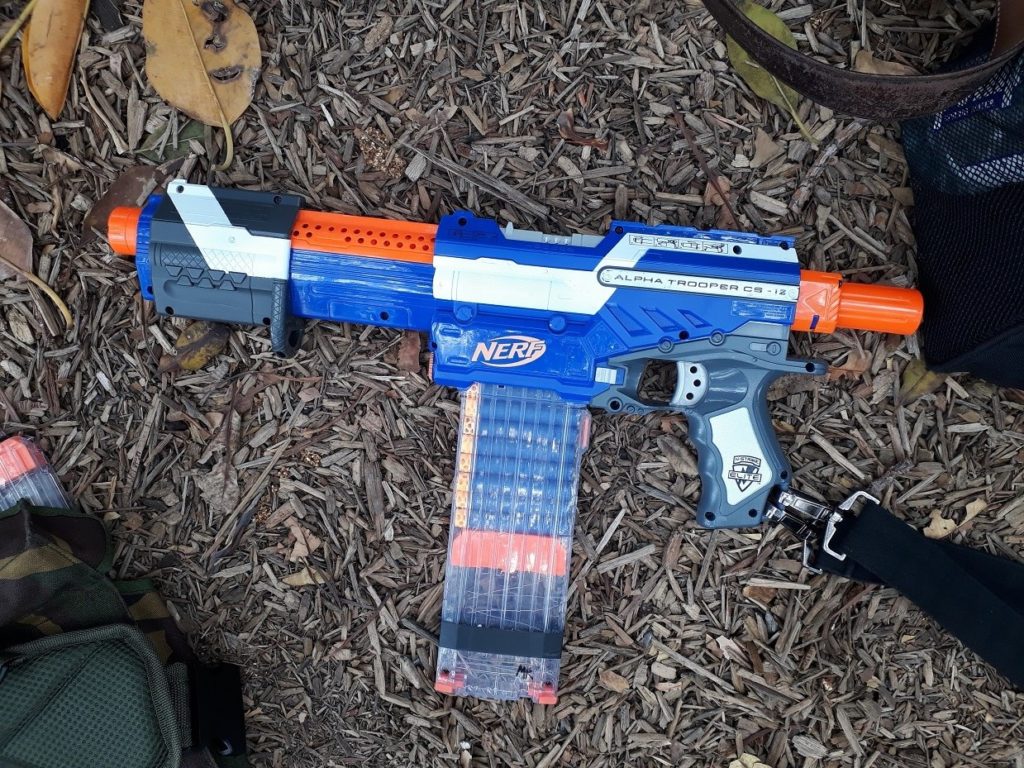 Elite Alpha Trooper – pump-action, mag-fed springer. Solid out-of-box all-rounder. Falls behind its contemporaries for modded performance due to internal inefficiencies, and is weirdly prone to damaging itself over time. 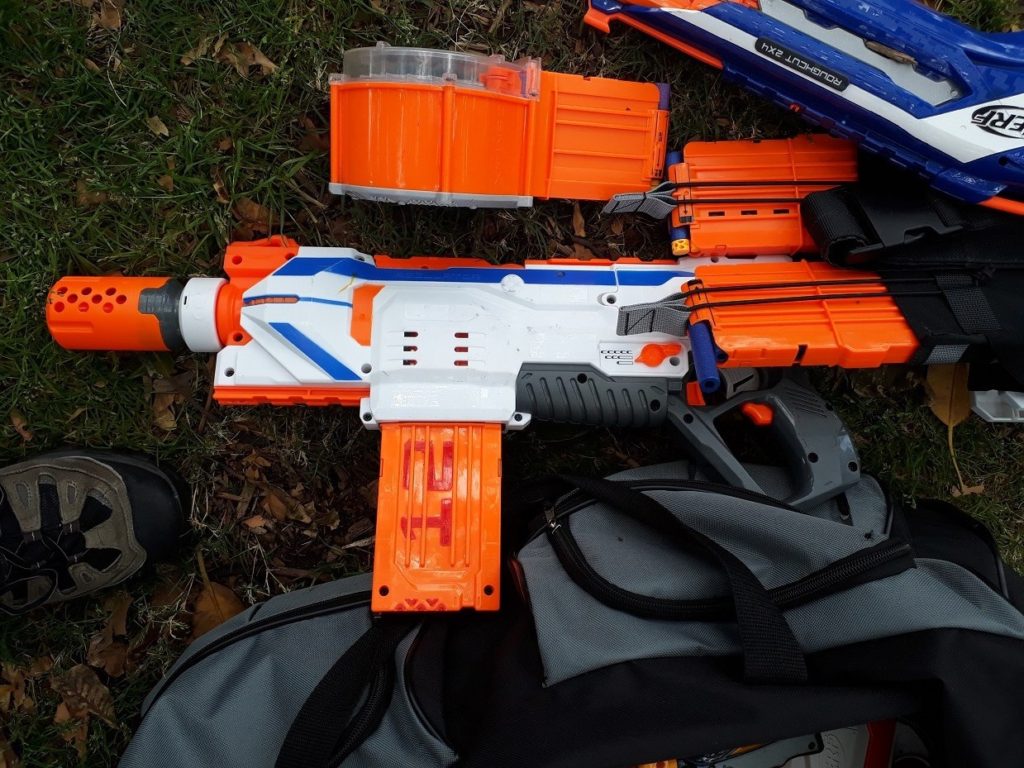 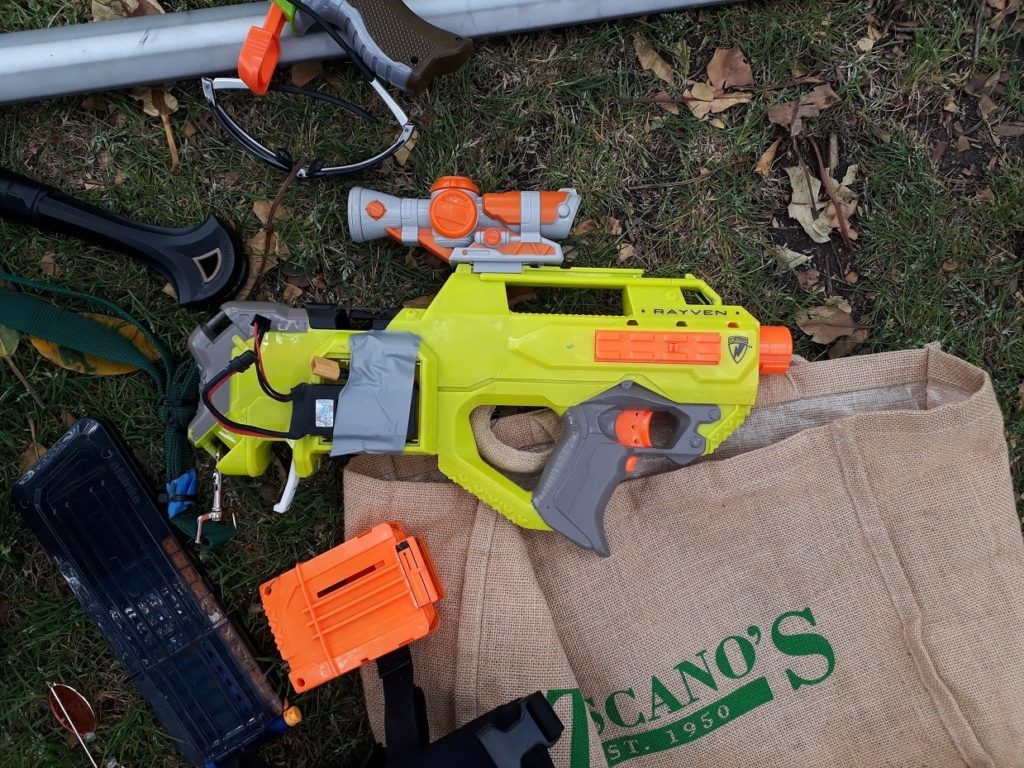 N-Strike Rayven – semi-auto, mag-fed flywheeler. Decent all-rounder, leaning towards ROF. Has numerous additional issues when modding compared to most other flywheelers, but has a similar ceiling. 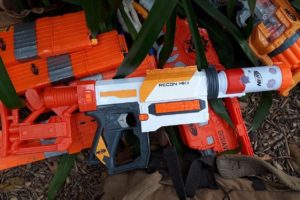 Modulus Mediator – pump-action, mag-fed springer. Compact pump-action all-rounder, leaning towards ROF. Significantly shorter than any other pump-action mag blaster, but is forced to use a side loading magwell. 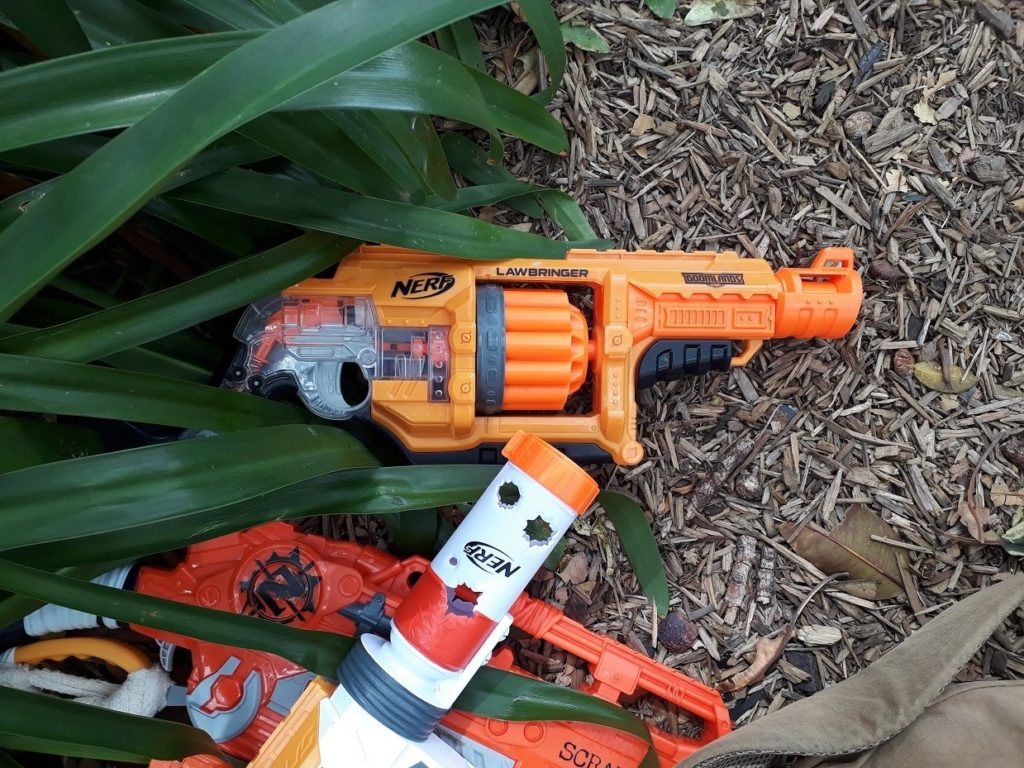 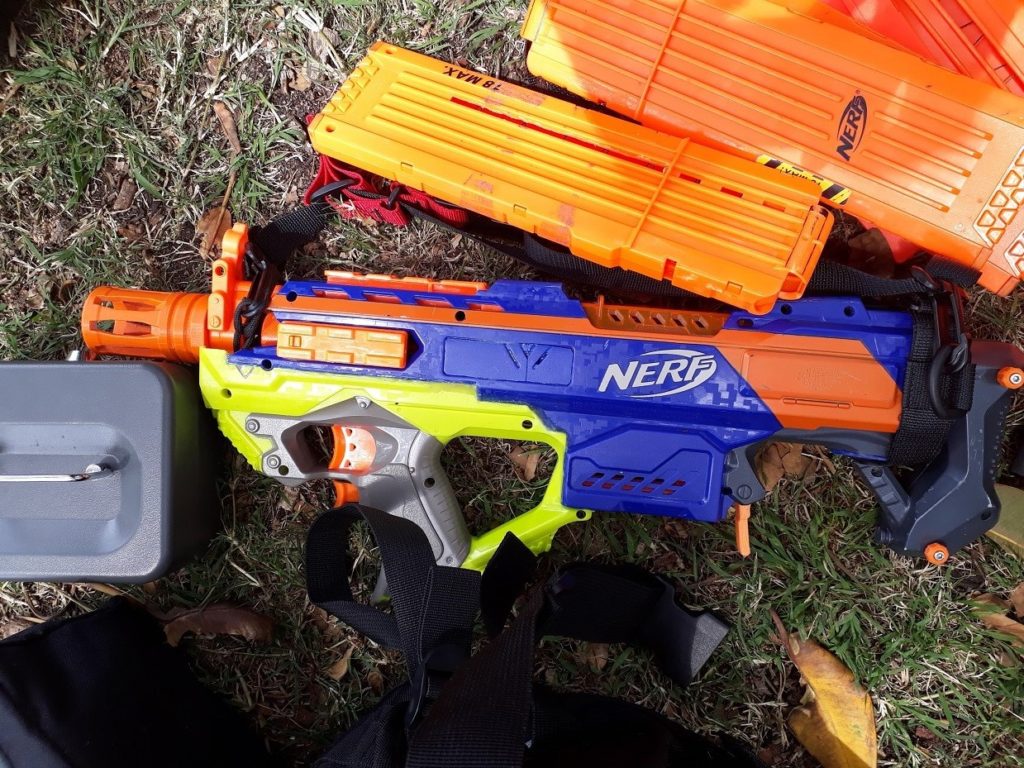 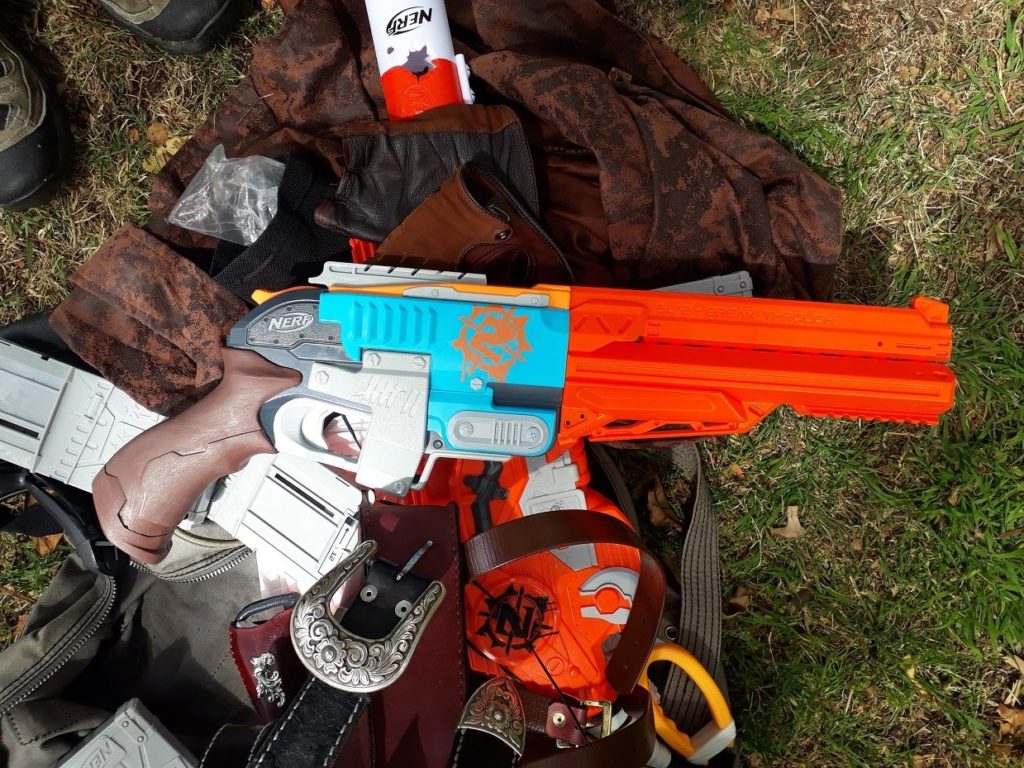 ZS Sledgefire – break-action springer. This one was set up with two barrels, for decent power and accuracy. In its current form, offers no real advantage over other blasters besides sheer style. 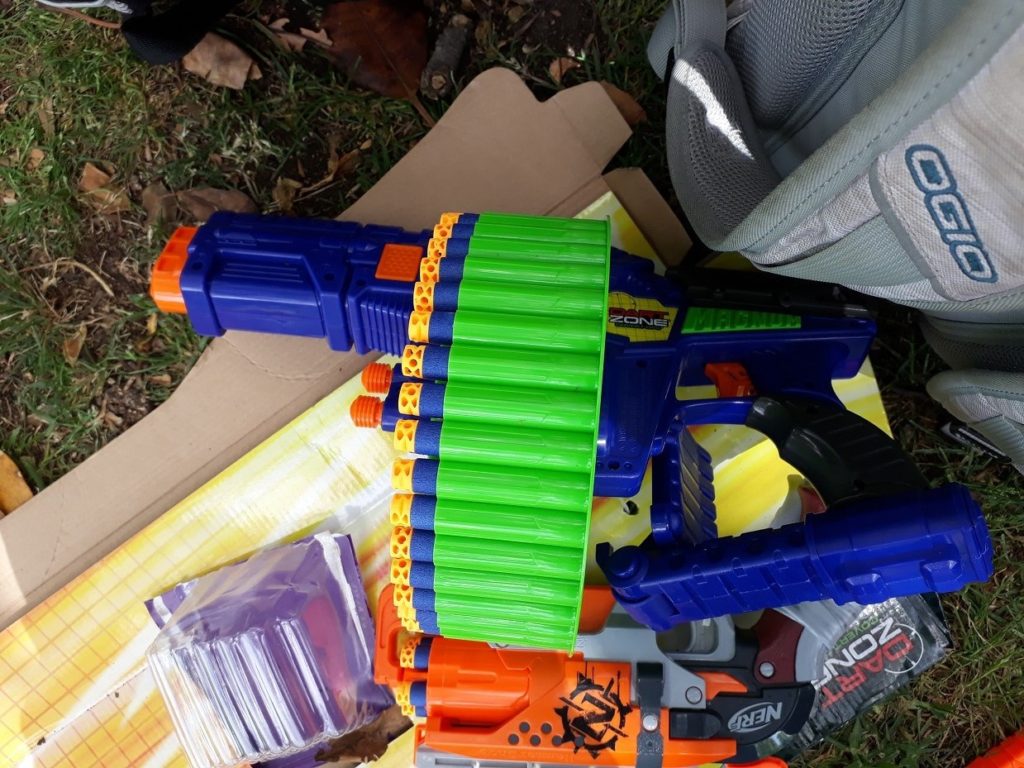 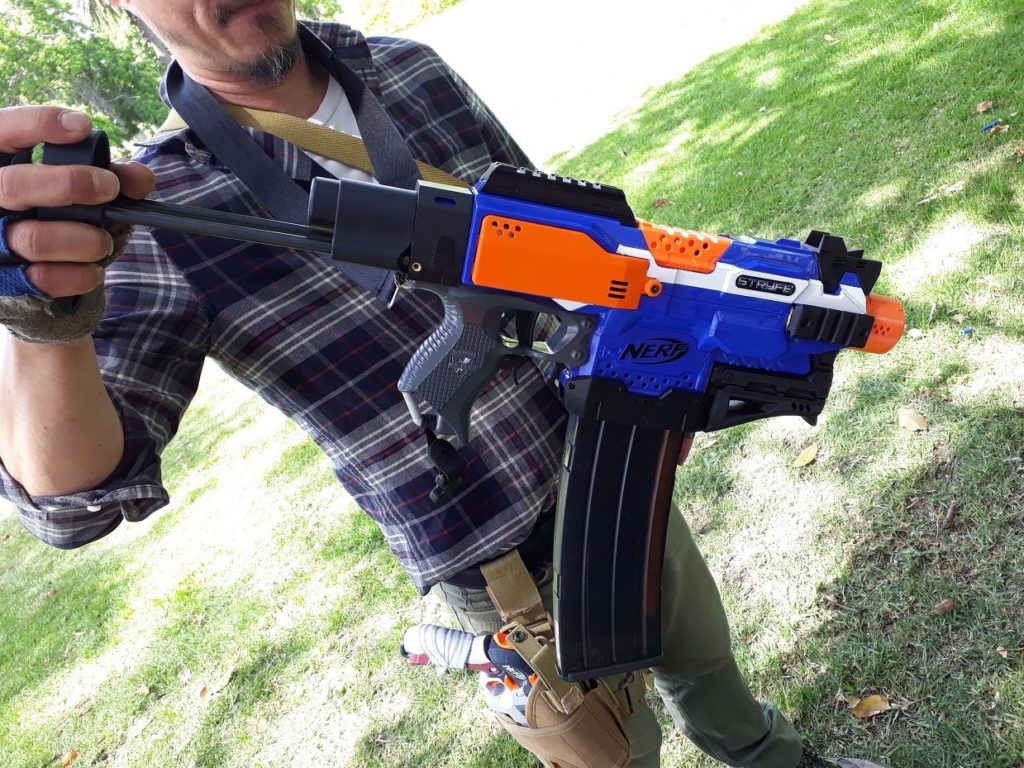 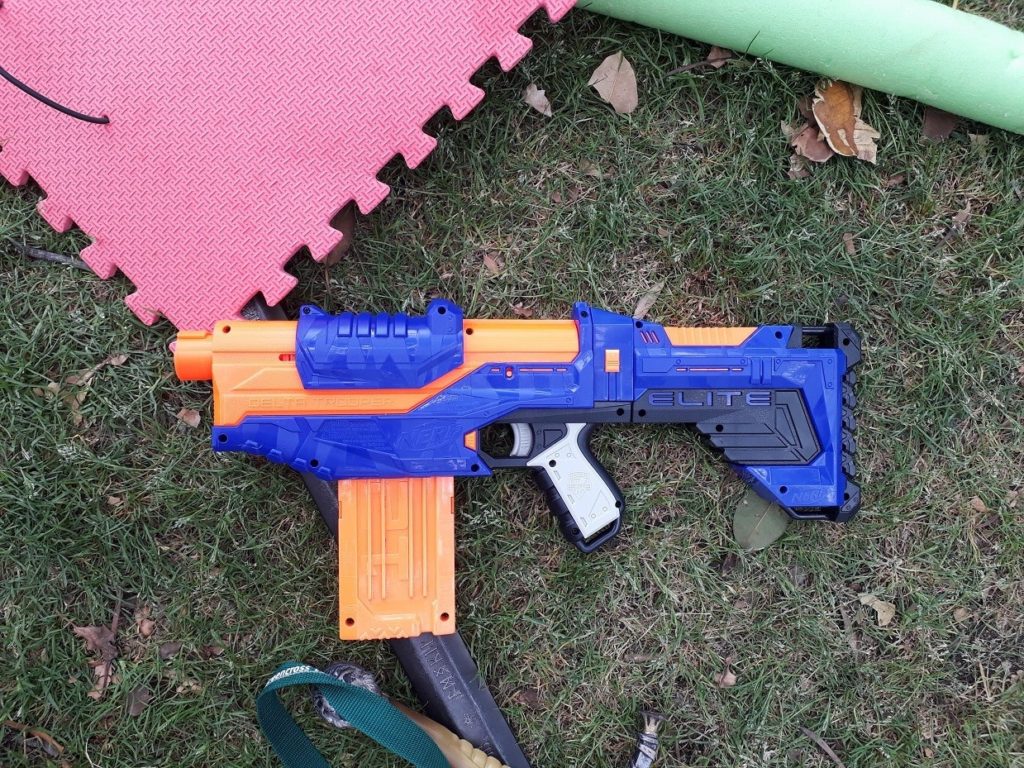 Elite Delta Trooper – slide-action, mag-fed springer. Relatively compact blaster, differentiating itself from the Retaliator only with slam-fire, otherwise functionally the same. Aftermarket parts are rather lacking at the moment, so has far less support and options than the Retaliator. 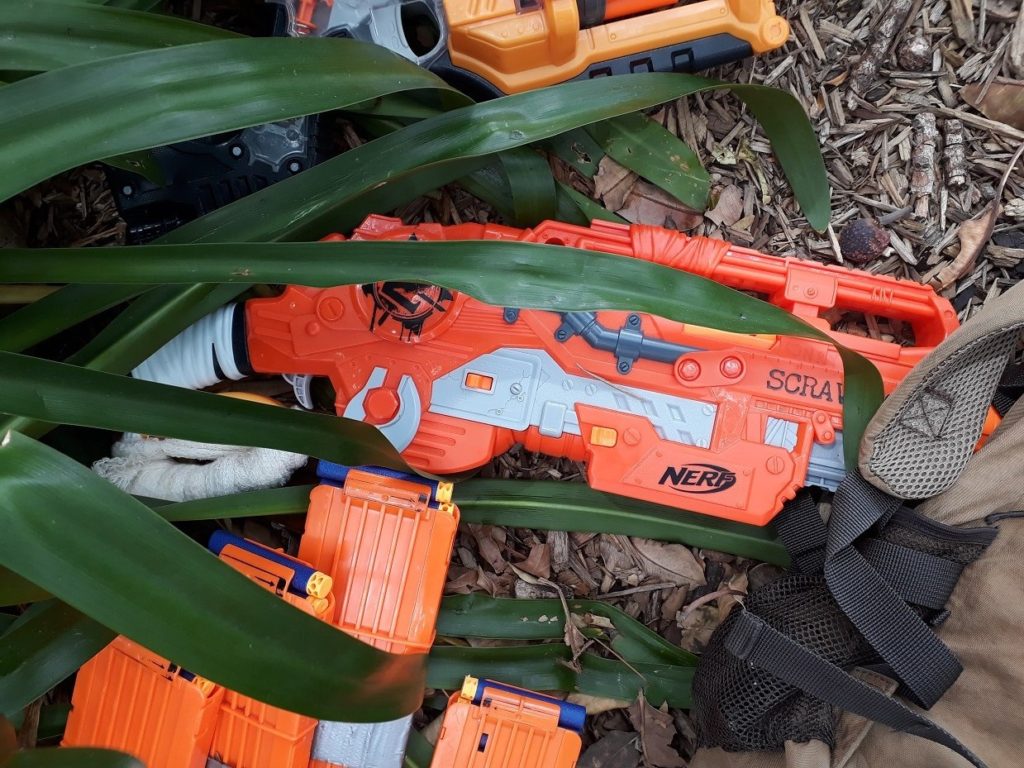 ZS Scravenger – lever-action, mag-fed springer. Notable only really for its one-handability, falling behind in most performance aspects to several other blasters. 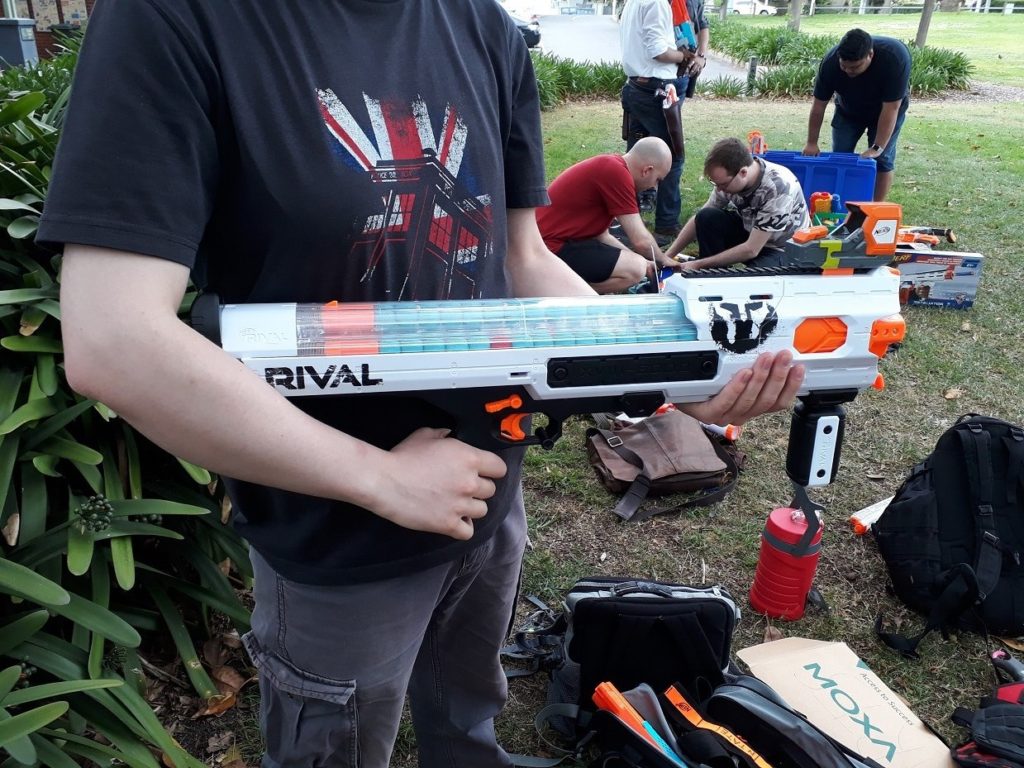 Rival Hades – pump-action, internal-mag-fed springer. Insane capacity for a mag-less blaster, though is quite long and bulky. Personally I really didn’t like the ergonomics of it, the main grip felt too far back, and the stock felt too short and weirdly shaped.

Jet Blaster Ceda – pump-action, mag-fed springer. Essentially a pump Retal. I honestly found it to feel a little cheap. Several of the parts, particularly the handle, fit a little loosely together, resulting in a flimsy and flexible feel. 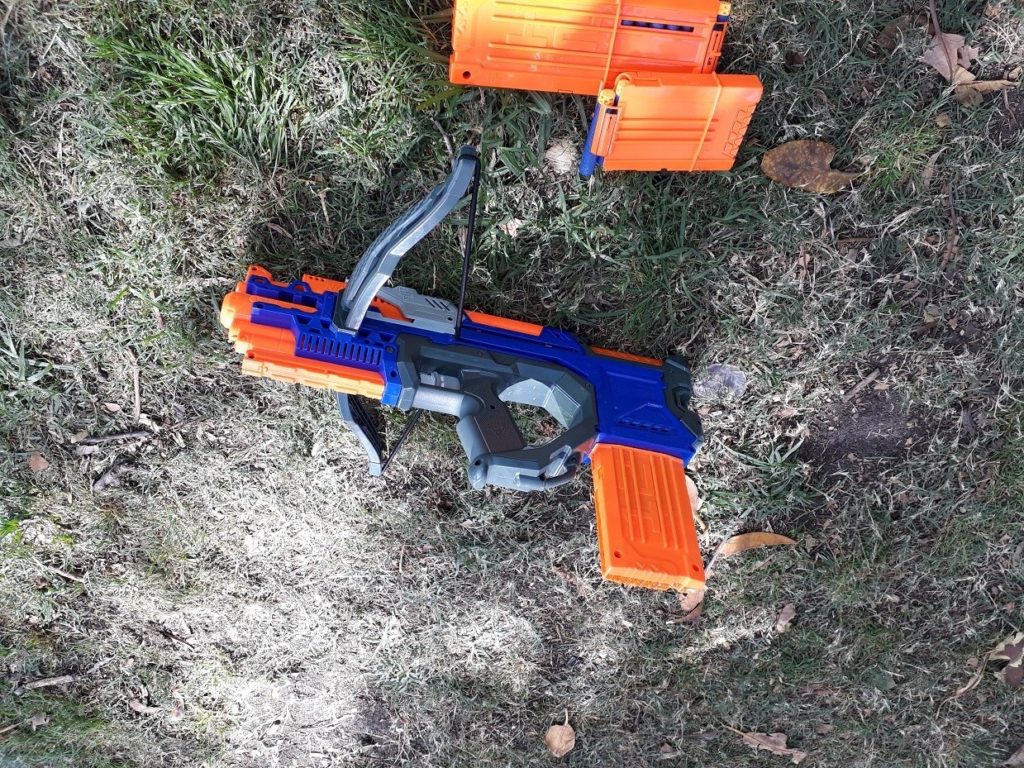 Elite Crossbolt – slide-action, mag-fed stringer. Rather quiet, but very wide due to its bow arms, and vulnerable to especially bad jams. 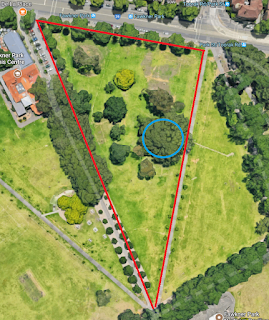 The weather today was quite nice, peaking at about 20C, with clouds or blue sky depending on the exact time. We had a turnout of 20 or so, and most stayed for the entire event, which is a step up from the past few months.

We gave a new batch of Waffles a try today. These have a dark blue body, and notably, a much stiffer head than usual. These ones do not like compressing, which is a distinct difference from the Waffles we used to use. The limited experiences I gleaned from other players was that these Waffles seemed to feed much more reliably than the Z-Darts we tried out, and also performed better out of front loaders especially. The next event will have both darts on hand to directly compare and make a final decision. 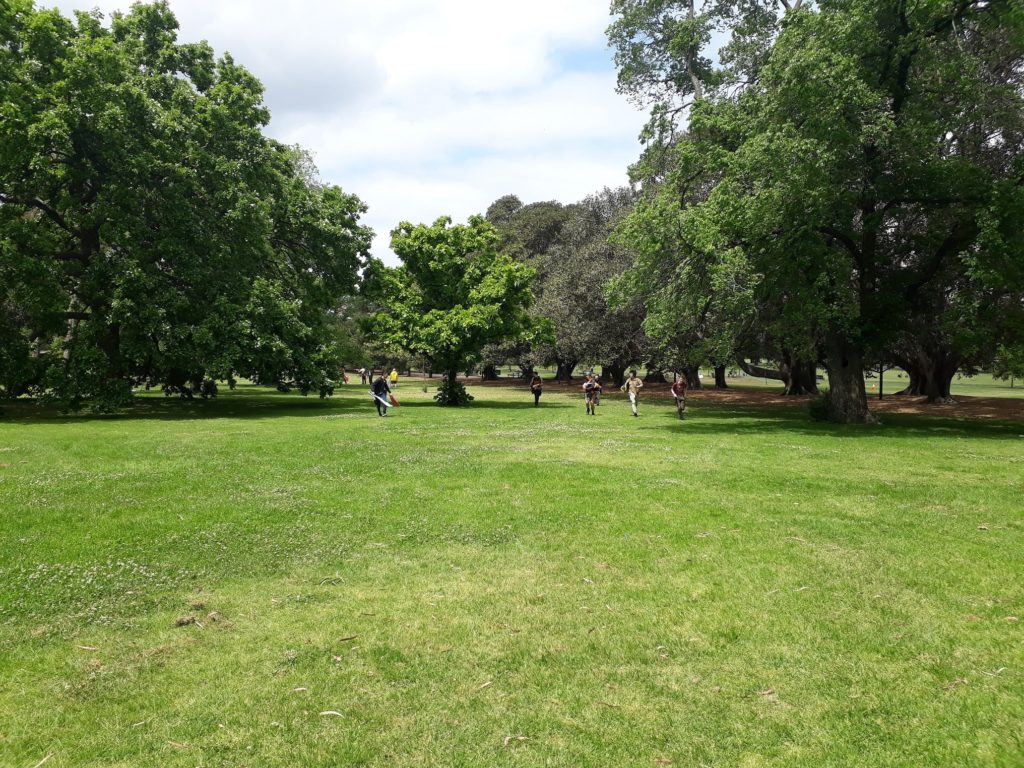 We started off as always with a Survival round. From the start, I stuck with a small group of humans, attempting to avoid the masses. This worked fairly well for the most part, and we were able to avoid direct conflict with any large zombie groups for most of the game. Eventually, with the majority of other humans turned, the zombies turned to my group. Our usual tactic was wait until both large Tanks had dedicated themselves to a direction, then push through the side furthest from them. Any other zombie was a much less significant threat, and could be punched through much more easily. Our number was slowly whittled down, until I was left as the last survivor. 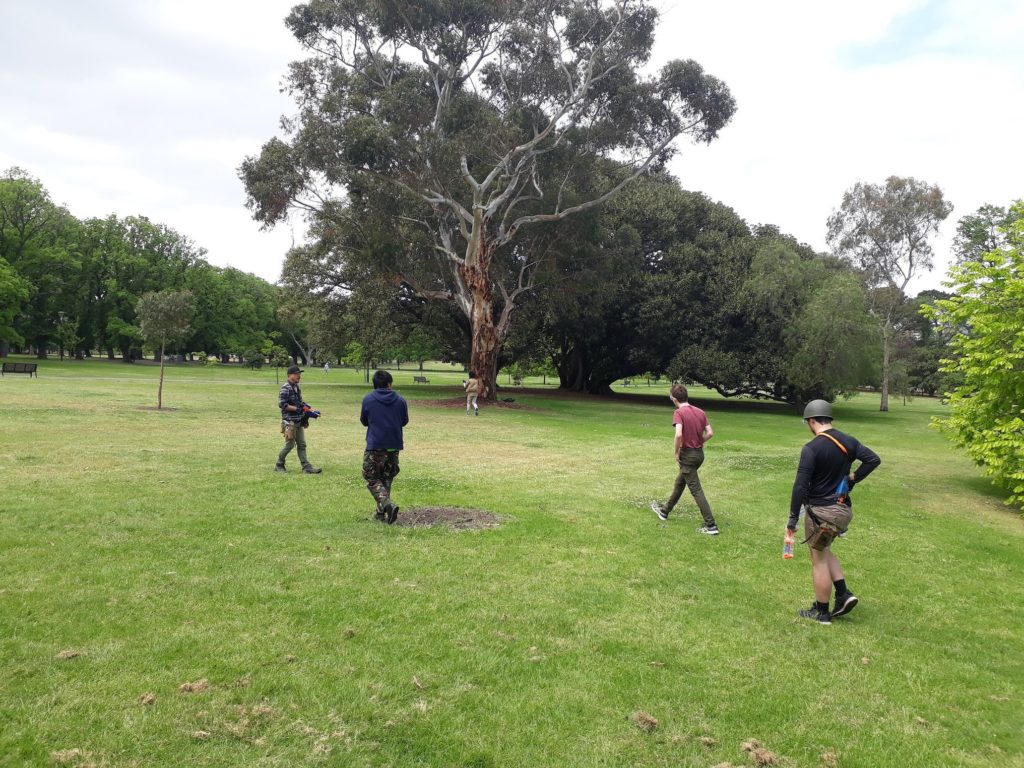 The second round was a Squad Survival round, with squads of 4-5 humans. This event, the humans were generally a lot more defensive, and were much more willing to work with one another. Two of the squads linked up into a group of 8, while the other two squads, including my own, stayed off towards the corners. The few starting zombies focused on the large group, and were able to score a few tags. The humans generally all circled around in the same direction, the two smaller squads keeping distance from anyone else where possible.

Seeking some action, my squad made an agreement with the zombies, helping them attack the large human group. Pinned between my squad raining down darts, and all of the zombies, most of the humans in the group were quickly turned. We also assisted in attacking the other human squad. With human numbers now thinned, the zombies predictably turned on us, and we had to defend ourselves. We employed the same tactic as the first round, punching through zombies where there were no large Tanks. With relatively less firepower than I’m used to for a grip, pushing through the Tanks was not an easy task, especially with all the surrounding zombies. Eventually, I was left as the last survivor again. 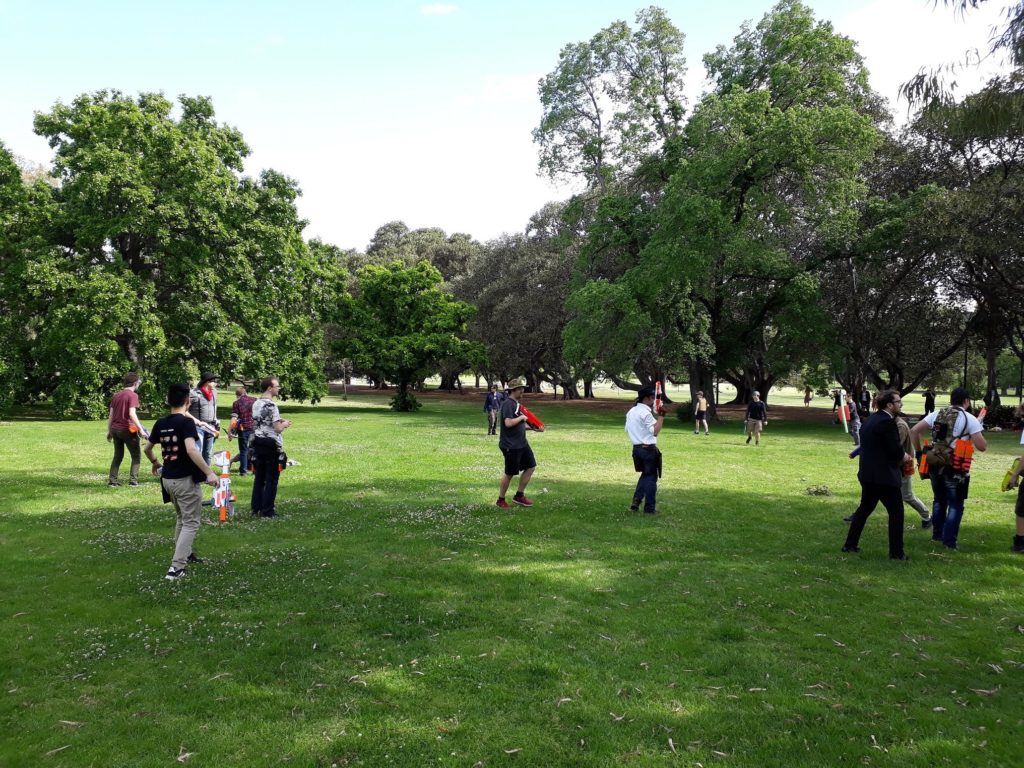 After a lunch break, we switched to some Space Pope. In the first round, I was selected as the Traitor. For much of the game, the zombies were not able to score a lot of tags. I had bided my time, hoping that the zombies would have been able to build up more numbers, but also so I could play as a human a bit longer. With only a couple of minutes remaining, I got a hold of the grenade and grenaded the General, running off to provide the zombies with fire support. Unfortunately, I failed to pick the grenade back up, and humans were able to stun and grenade me, turning me into a regular zombie. The zombies were unable to make much progress for the rest of the round, ending with a comfortable human victory.

Though I executed it poorly, I think there was significant potential in my Traitor strategy. With the PvP rules as they are currently implemented, a dart hit on a human is a complete stun, they cannot move or shoot. Thus, a rogue human providing zombies fire support can be deadly if well coordinated. Furthermore, the Traitor potentially removing the grenade from play by taking it can hinder the humans significantly. With no grenades, and ranged zombie fire support, I think that the zombies can have a very good chance of breaking through. My two main mistakes were not taking the grenade with me, and not utilising zombie Tanks for protection.

At the start of the second round, thanks to a misidentification, the human holding the grenade reflexively and accidentally grenaded a fellow human. The grenaded human in fact turned out to be the Traitor. Despite this, the zombies were able to make a lot more progress than the previous round, catching humans off-guard more frequently. Nonetheless, the bulk of the humans were able to maintain a relatively solid defence and never completely broke. However, nearing the end of the game, there was a confusion over the ending time of the round, and most of humans believed they had won. However, the round was still in progress with about 30 seconds remaining, and during the confusion, a zombie sneaked up on the Space Pope and tagged them, ending with a zombie victory. Had the confusion not occurred, I am fairly confident that the humans would have won.

After this round, we were interrupted by a group of people taking wedding photos, who asked to borrow some of our blasters for their photos. A few of them joined the next round for a short time as well.

The last round I played was a VIP Survival. We had two VIPs, one assigned one of the large Tank shields, the other assigned the Husk. Early on, a lot of combat occurred in the northern play area. With the humans in relative disarray, the zombies were able to score multiple tags, including the Tank VIP. The Husk VIP was lost shortly after as well. I split off to join up with a small human group. From here, the round progressed pretty much the same as the others, fighting off any group of zombies that approached, and directing our attacks away from any large Tanks. We were able to survive for a fair while with this approach, and I ended up as the second-last survivor.

I then began to pack up my stuff while another few rounds were run. These were a simple Tanbark Survival, with dart hits on humans instantly turning them into zombies. From what I heard and witnessed, it was very fast and absolute chaos. 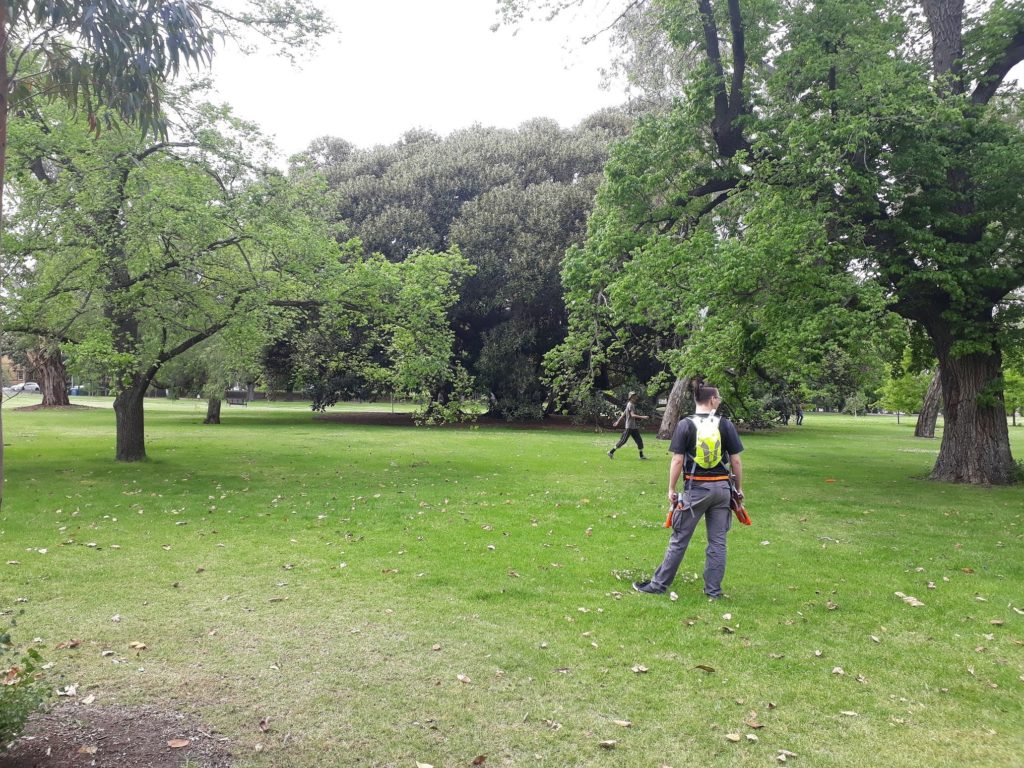 I’m looking forward to a likely December event, which if I can attend will likely be my last Melbourne event for a while. I’m hoping we can finally settle the choice of dart for the dart pool. I was reasonably happy with today’s event. Turnout was improved from previous months, but even more would of course be better. We were able to run some solid games, and I had a lot of fun.