Well this didn’t take long – and it used an older Trademarked name that I overlooked. As per this post here, one of Dart Zone’s new Adventure Force blasters is the Sentry X2, and is just the next “Kronos clone” to be announced. Not that that’s a bad thing! 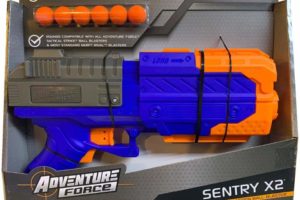 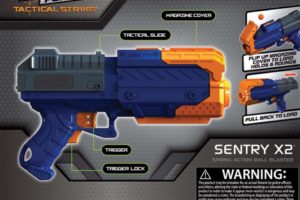 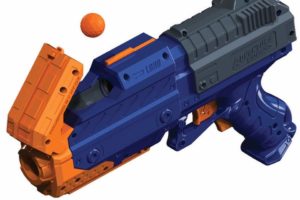 Given the success of the Adventure Force line (Accelerator, Quantum, Titanium) and the related BallistixOps blasters (Velocity, Powerball), more blasters are natural. With the wild success of the Kronos as a compact but hard hitting Rival pistol, emulating that blaster is only natural. Whether Dart Zone does it better will be seen.

The blaster as shown has a front “lid” on the five ball magazine, and primes via a top slide. It also features a secondary trigger that acts as the safety. I can imagine plenty of modders will remove that, however, and just keep the handle free of extras.

Rochester Foam Dart League will have footage of the blaster in play next week, so be sure to check their Facebook page!