We have a few update on future products and projects, thanks to the United States Patent and Trademark Office. Hasbro appears to have two product lines registered for trademarks, and Dart Zone has had several blaster names entered. Not to mention teasing their new blasters on social media. Let’s look!

Note that there is a disclaimer, so skip to the end if you want to get to the news.

As a policy, Blasterhub avoids dealing with product leaks; in addition to varying levels of accuracy, there’s also the issue of how the companies in question deal with leaks in a competitive environment. Earlier this year on a quarterly earnings conference call, Hasbro noted how they would prefer to reveal things at their own pace. As you’ll also recall, official announcements for things at Toy Fair were split up among different media outlets (Popular Mechanics, IGN, etc) before the general press release was sent to enthusiast fan sites/channels. There are always things going on in the background that can be messed up by the “NIC Hype Machine” promoting info that shouldn’t be out there. As such, unless the info is straight from the company or somehow public (an item bought on a store shelf, etc), it’s generally assumed that we shouldn’t publish it.

Why Have I Seen This Thing, Then?

Naturally, some areas do end up being a little grey. For example, I’m the kind of person that does hobby events over a large area, including in Canada. Thus, if I come across a product that’s on shelves at ToysRUs or Walmart Canada, I can buy it and do a review, even if it’s not in the United States yet. That’s just a quirk of product distribution. 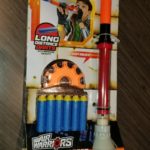 However, government filings for Intellectual Property (patents, trademarks, etc) are by definition public information. It’s one of the reasons I try to keep up on documentation both in the US and in other places. For example, Hong Kong’s IP Office has often had pictures of Buzz Bee blasters (under Registered Designs) months before they appeared on shelves. The United States Patent and Trademark Office has also had unique things on file, whether it be patents on internal mechanisms or names of upcoming blasters. Even if you have no clue how things might be used in the future, you know that they’re coming, and it’s fun to now be looking for those products in the future.

Case in point? Buzz Bee has had a patent for several years on mechanisms for a blaster-blowgun hybrid, where blowing into it triggers either a catch release or some kind of blast button. Only this year is it finally hitting shelves (and was shown off at Toy Fair)

I realize it may be annoying to stick an essay in front of an otherwise short news blurb, but it’s worth clarifying how things work. We are an outlet that gets info from companies, so we play by those rules. Even if you may have seen something elsewhere.

Two notable trademarks have surfaced for Hasbro since Toy Fair. On February 15th, we had a filing for “NERF ALPHA STRIKE” (Toy projectile shooters and accessories thereof”. Even more recently, though, we had an April 23rd filing for “NERF ULTRA” in the same category. Hasbro won’t have any official information on these yet, but we can safely assume (based on trends of what Nerf products they actually trademark) that both are, in fact, upcoming product lines. Hasbro doesn’t generally trademark the names of individual blasters.

Prime Times Toys, on the other hand, does tend to file for trademarks on individual blaster names. And they’ve had a few accumulate.

Among dart blasters, the name “SAVAGE SPIN” has been filed since January. More recently we’ve seen “DESTRUCTOR” (April 4th) and “CORNERSHOT” (five days ago, on May 10th. Given recent posts by Dart Zone, we can reasonably epect at least some of those names to appear at Walmart as Adventure Force blasters.

Assuming the hashtags are being used correctly, we can also expect to see some of these blasters at Endwar this year, whether at a Foamcon booth or as a sponsor-type promotion.