It’s been an unofficial rule for myself, but I’ve generally tried to steer clear of reviews for various blaster modding materials. Inherently, the DIY nature of things means that results will vary. In addition, many items like motors have extensive literature on the internet, whether from sellers or from hobbyists who’ve just been able to devote more time to testing.

However, some discoveries are too good to not pass along the information. Such is the case with Daybreak Wheels, designed by Kuryaka. After all, it’s not every day that you can throw a flywheel blaster together in one evening and be able to make 200+fps shots.

From the Reddit post that debuted the wheels. Also data from his initial testing (and which others have confirmed).

What the heck are these?

They’re a little funky as they’re designed for 41mm cages rather than the 43-42mm range of most modern flywheels, but that’s what it takes to get high concavity on a big wheel well.

31.5mm root diameter, 38mm outer diameter. 7.1g per wheel. Almost full envelopment, but set up to have 9.5mm gap on a 41mm cage. This lets them fire FVJs with absolutely no problems – at R.H.O.M.B.U.S.S. I loaded up a full mag of blasphemy and full-autoed at at tree.

What Does All That Mean In English?

Flywheel blasters accelerate darts by squeezing them between spinning wheels. Focusing just on the wheels (let’s assume you have aftermarket motors), you can transfer more energy by putting the wheels closer together for higher “crush”. This transfers more energy, but it does it with less efficiency as the wheels get closer; some of that energy goes into deforming the dart instead of propelling it. This also can lead to higher rates of destroyed darts

Daybreak wheels aim to transfer energy more efficiently with milder “crush”. The wheel rims have a semicircular shape that envelops the dart and prevents severe deformation. As a result, a lot more energy goes into spitting the dart out, as opposed to just squishing the dart. You simply need a different spacing than most wheels.

For reference, the original in Stryfe-fitting high concavity wheels, Eclipse, had a tendency to destroy darts, from the combination of high motor rpm and high crush. Kuryaka, it would appear, went for a milder design.

I grabbed four pairs of wheels, along with assorted cages, as the last of the initial run sold out. Initially, I wanted to put a pair into a Stryfe for an easy superstock blaster – good for indoor arena play, but that (with the right motor) could still be under-volted for HvZ play. However, a more pressing need arose; I needed a solid primary for the upcoming Foam Pro Tour event at Endwar. To that end, I decided to compromise my need for performance with my tendency to use something silly, and made a dual-stage Fortnite AR-L. With a bit of shell trimming, it was easy to drop in the 41mm dual stage cage Kuryaka has posted to Thingiverse. It normally gets used for Modulus and Demolisher blasters, but the AR-L shares the same screw mounts.

I used four Kraken motors in my blaster, all running off a 1300mAh, 75C 3S battery. I skipped rewiring the entire blaster by using the existing wires to trigger an automotive relay.

Please excuse the one obviously bad thing I did: using a wire nut instead of properly soldering and shrink wrapping the last connection. It was good enough for testing, but definitely not for normal usage (because of vibrations, etc).

Using Adventure Force waffle darts (which really are the best store-bought dart at this time, if not of all full-length darts), I averaged 193fps, with darts straying lower into the 170s and higher above 200. Aside from a few old school NIC mods and air blasters I still have lying around, it’s the hardest hitting blaster I have now. It also held up perfectly fine at a recent war against players with FDLs, so I believe I’m all set for the FPT. 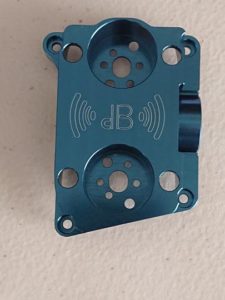 Daybreak wheels are an incredibly inexpensive and effective option for high fps blasters. Even if you don’t feel the need to push your dart velocity, they can help make competitive blasters for superstock and ultrastock play. HvZ play is also possible when running 3S motors on just 2S (although I have not tried this yet).

The newest generation of wheels is up for sale at Kuryaka’s Etsy store, as well as Out of Darts. (Check Blaster-Time for wheels if you’re in Europe) In addition, metal cages are now available, if you’re a fan of such things.

As for me, I have a few other good items that I still need to review, including the Rapidstrike switch plate from Containment Crew, and an afterburner from Blaster Core. You could say I’m a bit behind.