One surprise this year I didn’t see coming was another Rival-firing drone from New Bright. I reviewed last year’s MECH Robocannon, which was surprisingly fun, even if it wasn’t quite as useful for wars as I would have liked. This year brings a smaller, less expensive version that does away with some of the nicer features of the former. It’s still fun to use (if horribly impractical), and all the kids that have been near me the past two weeks have loved using it. Just know that if you’re looking for a unique spin for your next Nerf war, that this isn’t it. 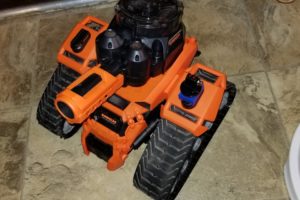 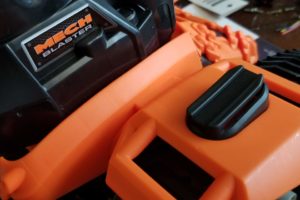 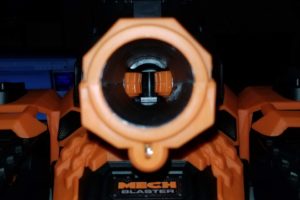 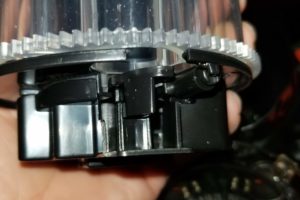 Last year’s MECH Robocannon was a large, robot-shaped R/C toy that ran on a 4S LiFePO4 battery (included) and shot Rival at a shockingly good 122fps at full charge. It could also aim up and down, held 20 balls in a unique hopper, and included a laser sight. Granted, it was top heavy and only really suited for indoor use, but it was fun.

This year’s Mech blaster, meanwhile, is much smaller and lower to the ground. It runs off of an included 3S LiFePO4 battery, but appears to use a similar ball-firing mechanism. As a result, the blaster portion only averages 80fps – enough for an R/C tank battle, but not a spectacular result for Nerf wars. It also holds slightly fewer balls (16) and has a lower rate of fire (about one ball every 1.5 seconds). The “laser sight” is maintained.

Interestingly, the new version has an updated hopper design and integrated safety. The gear system that rotates the hopper also pulls back a small plunger. As balls drop out of the hopper, the plunger kicks them forward into the flywheels. Meanwhile, an extra set of contacts sits under the hopper. This prevents (during normal usage) the blaster from firing if the hopper isn’t properly loaded. Given that kids will inevitably use these, something that prevents them from somehow turning the blaster on while curious fingers are inside is a welcome addition.

Another unique feature is the inclusion of two rail mounts for action cameras. However, I cannot for the life of me figure out what kind of mounts these are, and have yet to hear back from the company. The dimensions are off in a few aspects from Nerf rails, but I modified a 3D printed mount to work. Once I’ve tweaked a few things, I’ll make sure to include a Thingiverse link. Just in case anyone else wants to try.

A few things aren’t carried over from the last version. For one, any vertical aiming has to be done manually, with the cannon having four positions. Another omission is that nice cockpit light that indicates the toy is on. Turns out the toy will keep drawing juice when sitting still, as long as the “ON” switch is in place. I caught it before the battery got too low, but keep that in mind – little Timmy leaving this in a corner “ON” for a week might end up with bad results.

Attempting To Use It

Despite the slow ball velocity and rate of fire, I tried using this at two wars anyway. As expected, the results were quite underwhelming. Long delays between button presses and balls firing makes it near useless. Even so, it was fun to use. It does, however, give me the itch to modify a Terrascout once again for these types of shenanigans.

Also, it fired all types of Rival ammo that I filled it with, not just the included ammo.

The Mech Blaster is a fun toy, just not a useful war tool. It does take up far less space than the previous iteration, and it’s cheaper at just $70. It does shoot slower, but it still maintains a few cool features (as well as new ones, like camera mounts). As an adult Nerf fan, it’s not quite in my wheelhouse. However, it’s extremely kid friendly, and I imagine it would make a fun holiday gift come Christmas, Thanksgiving, or whatever other holidays you may celebrate.