Buzz Bee Toys takes up a decently large chunk of shelf space at Walmart, thanks to the Adventure Force line. Among their entries this year is a double pack, featuring two blasters and multiple accessories, including magazines that clip together. It’s another item that’s clearly sized for younger kids – but it has the performance you’d expect from modern Buzz Bee blasters. It’s the Arsenal Blaster Pack, and it’s worth a look if you’re trying to arm multiple children.

The Arsenal blaster pack comes with two blasters, three magazines, and darts. The first blaster is a pistol, not unlike the Air Warriors Revolution. My opinion there largely stands with this blaster, with one exception: I actually like the aggressive shapes on this blaster compared to the Revolution. It looks mean, but is balanced out by the blue and neon green color scheme. It also has a slightly larger main grip than the Revolution, and is amazingly comfortable.

The “sniper rifle”, meanwhile, comes with a scope accessory that’s largely cosmetic, but great for pretend play. Again, seeing as this kit is geared for small children, it has some issues in adult hands. The handle is simply awkward to use, and the short stock is pointless unless you decide to press the blaster against your shoulder and only use your trigger finger (not gripping the back at all). That being said, the bolt action is easy to grip, with an easy prime. A ball at the end would have been a more comfortable option, though.

Both blasters have a top-mounted rail that’s compatible with existing Buzz Bee attachments. 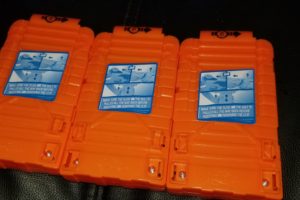 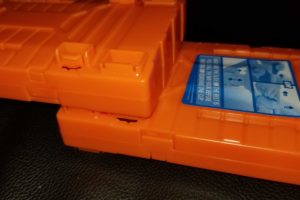 Starting this fall, many of Buzz Bee’s magazine-fed blasters shipped with new magazines. They work the same as the old versions, with one significant difference: molded attachment points allow users to make their own “jungle mags”, instead of using tape or some other connection method. In theory, you could connect as many magazines as you wanted, regardless of practicality. In practice, two or three magazines is the most you’ll probably use, with the free magazine being loaded on the fly during play.

Both blasters averaged 75fps with the included darts – not quite as hard-hitting as some other Buzz Bee blasters, but well within expectations. Rate of fire, of course, differs greatly. The pistol can put out two darts per second, while the other blaster can do one dart per second if you’re really pushing it.

Of the two blasters, the pistol is more useful, but it may not be the first choice for the little foam blaster in your life.

As noted, the pistol is essentially the same as the Revolution. So for this review, I’ll just take apart the second blaster. It’s set up in similar fashion to previous bolt-action blasters like the Alpha Rogue, but with the added space for a dart magazine. The plunger tube is somewhat smaller in diameter than other magazine-fed Buzz Bee blasters. This may impact efforts to replace the spring, should you choose to go that route.

The Arsenal Blaster Pack in a hard-hitting, inexpensive option for arming multiple kids, even if one blaster (the pistol) is clearly superior to the other in usefulness. In terms of play value, however, it’s a great choice for just $20.