Firstly, I have to give major credit to Foam Focus, They’re checking things out at Spielwarenmesse (Nuremberg Toy Fair), and putting out great posts on their social media about it! See their Facebook and Instagram pages and follow them!

To the main story of the weekend: D-Dart debuted their Tempest this past year, popping up in Target and other retailers. I gave it a mixed review, noting the cool concept but also the lack of power and compatibility with common darts. However, they’re expanding the line in cool new ways that improve on the original design!

What about these D-Dart Hailstorm prototypes though… 77 Rival rounds in a compact full auto design. Still in prototyping, but it works and looks awesome. Can't wait for this! #nerf #nerfrival #nerforsomething #prototype

D-Dart did, of course, start with an improved version of the Tempest (the Pro), with a higher rate of fire. But the wares at their booth go beyond that. According to Foam Focus, there are versions with higher capacity (Twin Tornado), removable drums (Cyclon), and Rival-firing drums (Hailstorm)!

My personal interests are in the first and last on that list. The Twin Tornado has two rows of darts for 54 total. It also features two firing modes, shooting one or two darts at a time. Beyond that, if you fire one at a time, the blaster will switch rings to fire all 54.

Finally, there’s the cool Rival-firing prototype, the Hailstorm. It’s mostly 3d printed as a demonstration, but works! See the video from the Instagram post above. It holds 77 balls, and it (currently) runs off of two 18650 lithium ion batteries. There will hopefully be further news updates if changes are made to the design…or if it makes it to market. 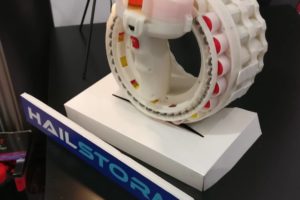 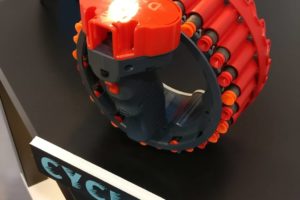 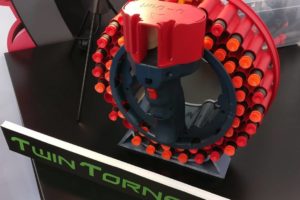