Author note: this blaster was sent to me for free to review. Thanks, Dart Zone!

The Storm Squad name has been floating around since 2017. This past holiday season, it was advertised as a holiday item in Dollar General’s Toy Book, but got delayed. Now, in January 2020, it’s finally set to appear on shelves. Is it worth the $5 price tag? Assuming you’re looking for a small but powerful stock pistol, yes. 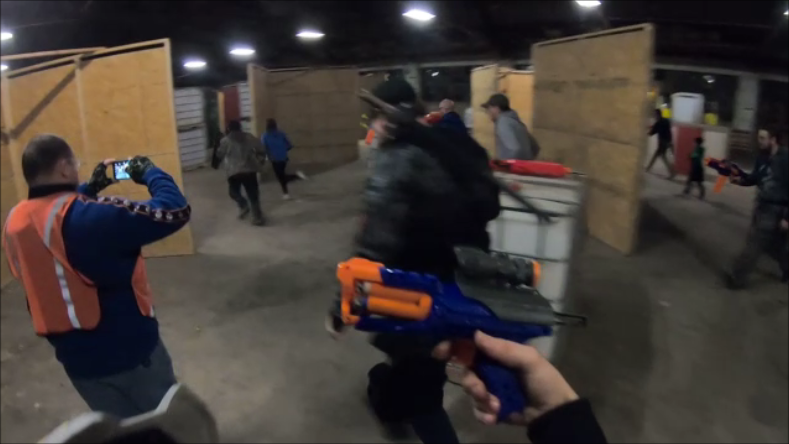 Using the Storm Squad at the last CANE war.

The Storm Squad is a fairly simple blaster. It features a small but open handle, with a fairly large trigger in comparison. It primes with a top slide (the “scope” and slide are all one unit), with the plunger rod sticking out the back on priming. It also has a four dart cylinder, with one barrel open for reloading.

As silly as a dart blaster looks with a fake scope, it actually isn’t a bad thing here. It’s a large surface for gripping and priming the blaster. It does make it less likely that you can shove the blaster into a pocket or holster. But for normal use (or for kids, for that matter), it’s super easy to use. And at close ranges…the scope isn’t horrible for aiming. Again, more useful for kids, but not anything to actually complain about.

Reloading the blaster looks annoying at first; after all, only one barrel is exposed. However, the cylinder rotates on every trigger pull. It’s in a manner similar to the Maverick – lining up the barrel on the pull, then moving between barrels on the release. This allows you to quickly rotate through all the barrels for reloading. It should also be noted that the rotation happens before the blaster fires. In theory, you could lightly pull the trigger to rotate the cylinder on a primed blaster, then release it to get to an empty barrel. In practice, though, I fired many darts by accident trying to do this!

Finally, the Storm Squad doesn’t have an air restrictor of any kind – dry firing the blaster will make a nice, loud noise from plunger impact. Being a small blaster, Dart Zone is relying on a small spring-loaded flap in front of the barrels to prevent anything other than darts from being fired. On the one hand, you may not be able to get more power out of this blaster. On the other…that flap is all that’s preventing you from firing half length darts at similar velocities!

The Storm Squad packs a punch for such a small blaster. On average, the included “waffle” darts hit 75fps, which is more than necessary to hit those 80′ range claims on the box. In addition, you can fire off two darts per second, but since you only have four darts to load, you’ll run dry quite rapidly.

Here’s the inside of the Storm Squad. As you can see, it’s effectively maximized the space available for plunger volume. The two ends of the “scope” on the slide are solvent-welded on, but it’s possible to remove enough screws and pry things apart to get to this point.

Do be careful to keep track of the catch plate spring. It, well, sprung on disassembly.

For $5 at Dollar General, the Dart Zone Storm Squad may be a budget blaster, but it’s one with performance. It’s clearly designed for smaller hands (i.e. kids), but adults should still be able to use it without issue. Thanks to an open grip, large priming handle, and some power, it’s a blaster you can throw at anyone to get them started blasting the opposition.