Hasbro likes to do specialty line releases with various retailers – Gamestop has first dibs on the Overwatch blasters, Walmart gets Battlecamo, etc. In Target’s case, one of those specialty lines is the Icon Series, a line of previously popular blasters that have been rereleased and (supposedly) updated for the modern blaster era. Leading the pack is the Stampede, Nerf’s big clip-fed automatic blaster from 2010. While it does seem to have better performance, it also comes with less, and costs more than the original. If you’re a collector (or feeling nostalgic), you’ll still love the blaster, especially on sale. If you purely want modern performance for a good price, however, you may end up looking elsewhere.

I remember my first Stampede – it landed on Walmart shelves a few days earlier than the intended release date, and I brought it with me to an NIC game in Canada, The results were hilarious, as we all tried to hit people with clouds of streamline darts that had no accuracy whatsoever. Even so, for regular use, it was a major improvement, having a full-auto blaster fed by magazines. Even if it was a big, heavy blaster.

Today’s version is largely the same. There have been a few touch-ups – it now fires Elite darts (still inaccurate, but nowhere near as bad as streamlines). The Tactical Rails use the modern sloped locking teeth instead of the old, spring-based variety. It also uses the original ECS-50 logo in front, a nod to its original legacy; the Stampede was originally supposed to release with a 50-rd drum, and when that didn’t happen, later production runs omitted the 50 in the name.

As before, the 6 “D” batteries in the tray make for a heavy blaster, even with them sitting in the stock. But for a large, heavy, utilitarian blaster, it’s comfortable to use. The handle is large and comfortable, with plenty of room for hands of all sizes. The front is comfortable to grip. Turning the blaster on and off is as easy as flicking a lever with your thumb.

This Stampede still includes a shield attachment, but lacks the original bipod grip, as well as the additional mags of the original.

The blaster is easy enough to use, with a trigger pull resulting in the delayed firing of one dart – since the system is priming and firing all on its own, it does need some time. But once the trigger is released, the system will complete a cycle and stop, making it easy to do single shots or full auto. Simply hold down the trigger as long as you like to fire as many darts as you want.

For those familiar with airsoft, this is a similar sort of electronic geared system for firing projectiles, just scaled for Nerf darts.

The Stampede I bought had respectable performance compared to modern blasters, averaging 62fps with Nerf Elite darts. Not quite as fast as plenty of other, cheaper blasters, but respectable. It also consistently fired at three darts per second. With extended use, a reduced rate of fire will be the easiest way to tell if you need to change out the batteries.

There is a large jam door if you need it, but I never had any issues. 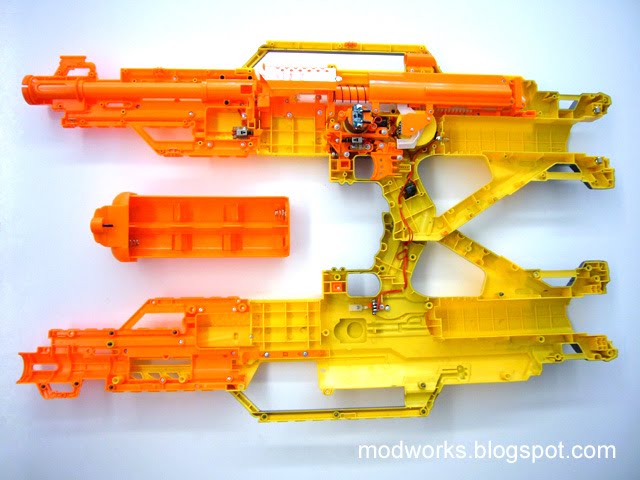 The Stampede is beloved among modders. Can other blasters do more? Certainly. But the fun complexity of the internals, plus the feel and sound of the blaster priming and firing, means there are plenty of dedicated fans.

I ended up not needing to photograph the internals, because they’re essentially the same. The switch on the side serves as a master on/off, and the trigger serves to start a cycle of gears and moving parts. Once the trigger is pressed and the system begins to move, a secondary switch is pressed internally. This switch keeps power supplied throughout the cycle to complete it, even if the trigger is released.

The plunger is smaller than that of a Longshot, but still large compared to many modern spring-powered blasters.

The Icon Series Stampede is a fun piece of nostalgia, updated slightly to make it not completely inferior to other modern blasters. But it also comes at a cost – $70 MSRP is nothing to sneeze at, especially when the original retailed for $50 and came with more things. But if you find it on sale and have a place for it in the collection, it should make you happy. Just be aware that, if you’re chasing performance, better options exist.