The Rival Overwatch series has to juggle being both a prop (for game fans and cosplay) and a functional Nerf blaster. Sometimes, the balance works, with items like the D.Va Blaster being both close to the in-game model and decently good for battle. Other times, it just doesn’t work as well. The Soldier 76 blaster falls under the latter category. It’s a great looking prop, but performance is severely hampered, and the blaster is simply uncomfortable to use. It may be a great prop, but it’s not a great blaster. Such is the problem you sometimes encounter translating video game models to real life. 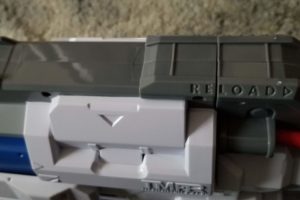 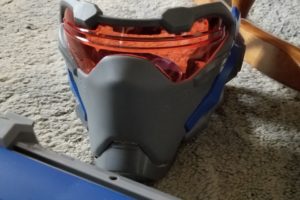 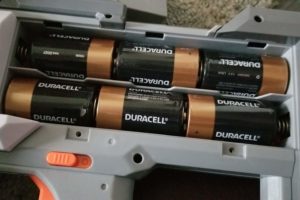 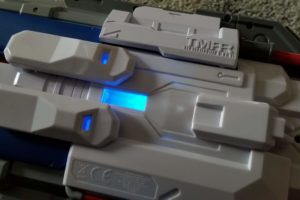 The Soldier 76 blaster is insanely long and heavy. When loaded with 6 “D” batteries, it approaches ten pounds. That’s only the beginning of the story, though. In the effort to match the video game model,we’re left with a thin, uncomfortable grip with awkwardly placed triggers, and a stock that’s essentially useless.

There are nicer touches around the rest of the blaster, including lights that power up when you rev the motors. When firing, two plastic assemblies on the sides of the blaster move back and forth for a recoil effect.

In addition, the Gamestop package includes a visor. While it looks cool, it’s certainly not effective as eyewear for gameplay, due to the distorted shape of the visor.

Overall, it’s extremely close to the game model. But doing so left us with a blaster that is uncomfortable in most aspects, even if it looks cool.

The Soldier 76 blaster is, to best put it, a neutered Perses setup. The top slides open to reveal a 30-ball hopper, with a conveyor belt at the bottom. That’s all the room there is, due to the need for model accuracy and other practical reasons. The blaster will not operate unless the hopper door is closed.

Pressing the rev trigger powers the flywheel motors, and turns on the lights. Pressing the main trigger activates the ammo conveyor belt, and also cycles the “recoil” effects on the sides of the blaster.

The first shot of the blaster averages around 89fps, which is acceptable for a Rival blaster advertising 90fps ranges. However, full-auto usage results in severely bogged down motors; successive shots are severely underpowered. This is disappointing, given how well Nerf has done other hopper-fed Rival blasters.

In addition, the thin hopper plus the slow rate of fire makes for inconsistent feed rates. This blaster takes more shaking than the Perses to empty the hopper. It ends up averaging three balls per second.

Finally, note a disconnect between blaster effects and actual ball launching – due to the nature of the hopper system, you can not fire anything, but still see and feel the recoil happening. It makes it feel less effective, at least, when the blaster is active but nothing is coming out of the barrel. 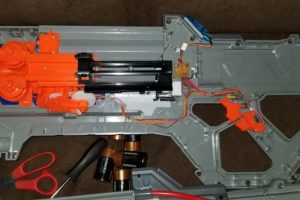 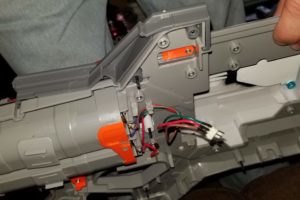 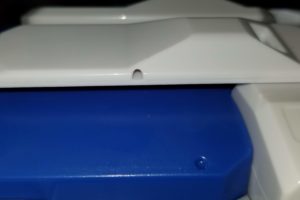 If you open up the blaster, you’ll first need to poke thin metal pins or Allen keys into the recoiling plastic pieces – this unlatches them to allow full disassembly.

The blaster is essentially a Perses internally, but with lots of extras due to the lights and effects.

I get the need for game-accurate props, but the Soldier 76 blaster was perhaps one that needed more thinking. At $120, it ends up being a giant piece of plastic with questionable performance, at least not without completely rewiring and redoing the internals yourself. Had the blaster been able to maintain performance in full-auto, it might have been more appealing. Instead, its intended use results in weak shots, making it hard to hit anything.

If you’re a fan of it as a prop, you’ll have to wait for a good sale – outside of a ~$20 price error when it first released, the best you’ll usually see is $60. And at that price, you can sometimes find a Perses on sale, a clearly superior blaster.

The Soldier 76 blaster just isn’t good, and if you’re that worried about getting a game-accurate prop, you can find something that’s a lot lighter and less expensive.