There’s so much to unpack here, that Nerf needed its own post. Let’s just jump right in! 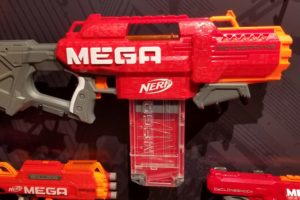 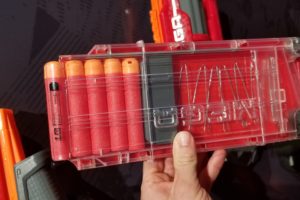 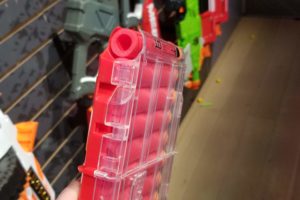 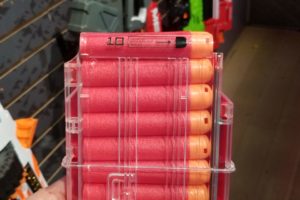 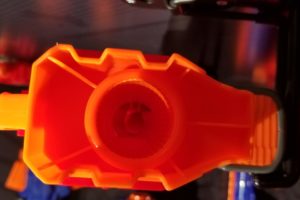 First thing I was interested in was the Mega Motostrye. For $40, you get a semi-auto blaster with a ten round magazine. It takes 4 C batteries, and appears to have Mastodon-sized flywheels. Most importantly, THE TOP OF THAT MAG IS IDENTICAL TO CENTURION MAGS. Being the weird Nerfer that I am, with loadouts for every ammo type, I know Mega magazines very well. This has me especially excited, because I can put all 24 of my Tyrant mags to use right away!

The firing was smooth, the flywheels were relatively quiet. This looks like the blaster that makes Mega finally viable for the masses in wars and HvZ (assuming you have room for all those mags). 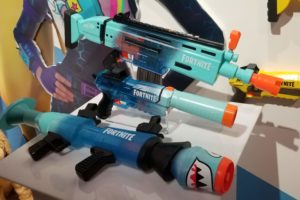 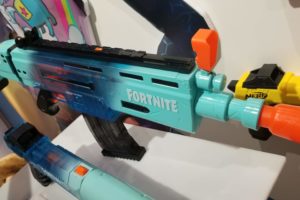 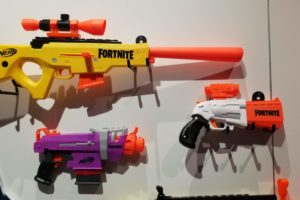 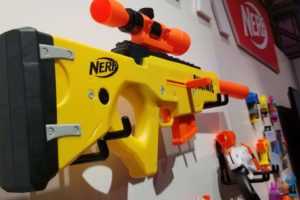 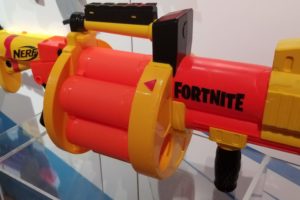 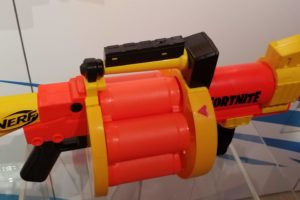 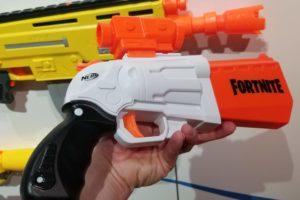 The exact details for these blasters can be seen here. The Rippley skinned blasters simply look great, with the translucent blue plastic and light blue overspray. They’re coming later this year, but actual details on when or where? Nope, they’ll just appear, and be very limited in stock.

Meanwhile, the BASR-L is fun to use (ambidextrous bolt-action, and magazine-fed), even if usefulness is limited compared to other blasters. The SR is hammer-action, with a four dart smart-AR, and has a nice pop to it when fired.

Finally, the GL is so much fun! Six Demolisher rockets that you can rapid-fire, easy to reload, and goofy looking. Exactly the sort of thing I would want, regardless of how practical it actually is. And $60 isn’t too bad a price, considering the mass of plastic and the extra brand license. Note that it’s pump-powered, like a Demolisher or Thunderblast, and rotates on the return. 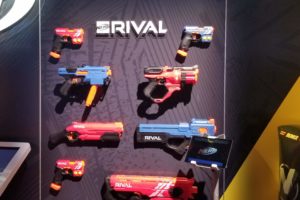 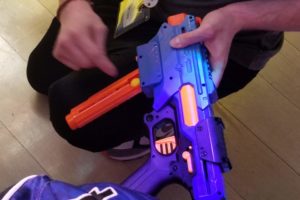 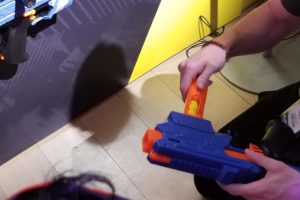 For $15, the Finisher promises to be a versatile blaster. Mag-fed, and it comes with a special mag you can top up on the fly via a side door. In a way, it’s a different take on the concept used by the Xshot Chaos Meteor, allowing you to retract the follower and reload, even with a round in the chamber.

Of course, while the mag can be loaded into some other blasters (like the Helios), the deeper magazine wells mean that you can’t use that ability. Even so, it’s a great new option both for scavenging and mag-fed play styles!

The Roundhouse was also there…but I have a post in the works already, after firing it all day yesterday at NY Dart Zone. Let’s just say it’s really good for $25, as long as you don’t manage to empty all the internal magazines in one go. 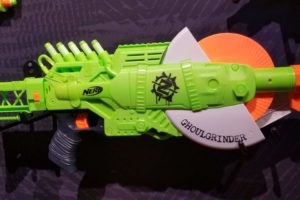 The Ghoulgrinder is rather unique. Ten shots, revolving wheel that serves as the cylinder/magazine/etc, and a stock plus attachment point. The charging handle sits on the left side, shaped like a screwdriver head. There’s storage for extra darts on top. It’s a fun kind of goofy, but ultimately not going to be everyone’s favorite, especially if practicality is your concern. After all, it’s a large blaster for firing just ten Elite darts. 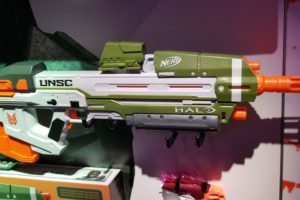 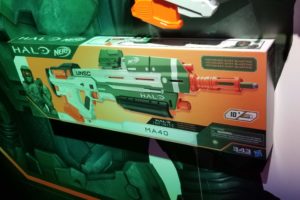 We already know about the Halo blasters. Seeing the MA40 in person convinced me, though. It is semi-auto, regardless of the speculation concerning it being powered by 4 C batteries. And it uses a normal pusher mechanism, making it essentially a Rayven in function (due to the magazine placement). The custom mag has extra plastic to complete the shape of the blaster, but otherwise it’s N-strike compatible. Almost. If you use drums, I’m afraid there’s too much plastic around the magazine well to allow their usage. Even so, if you’re going for an accurate model, it’s okay in my opinion to sacrifice drum usage for that purpose.

I’m not a big fan of the magazine release button, with its placement on the side of the blaster. Given the real estate, however, it’s understandable. 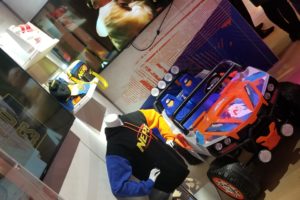 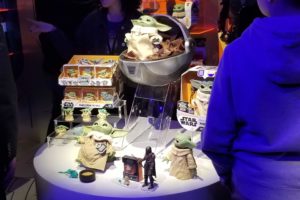 Of course, there were a few other stops on the tour, as well as notable absences. Alpha Strike and Super Soaker blasters were announced, but noticeably absent (aside from some minor Fortnite themed soakers). Ultra was there, but seeing as the Two is already being released, it was more about celebrating the worldwide release (with toned down blasters in the appropriate markets). And there were cute branded items on hand, like a Power Wheels type of kids’ vehicle.

In the rest of Hasbro’s tour, we had everything from Star Wars to games to various movie tie-ins. Expect to see more Power Moves blasters for Marvel, as well as a recolored Rebelle bow for Mulan. Also, there’s a four-shot dart bow for Power Rangers!