Note: another blaster I’m way behind on, since I’ve had it since January…

Last summer, the Trilogy made its debut, replacing the Sledgefire as the main “shotgun” of the Nerf line. It featured shell ejection and a brand new shell design, with decent power. However, it was also in a large format. Now we have the Shellstrike. It provides the “shotgun” function in a much smaller package. It may be weaker than the Trilogy, but it may also prove to be more useful for actual foam combat.

The Shellstrike is rather compact, considering everything that’s going into it. The top of the blaster is dominated by the plunger and the break-action of the barrel. Yes, the barrel tilts forward at the press of a lever on the left side of the blaster. There is no shell ejection, but it’s fairly simple to remove the shell, whether by pushing it backwards or tilting the blaster upside down. Extra shells can be stored below, and they snap in place.

The blaster primes via a top-biased slide prime (I believe this was borrowed from the Star Wars Poe Dameron blaster). There’s not much distance in the prime, but the spring is relatively strong. It has to be, to fire all the darts at once for a respectable distance.

There’s a rail on the bottom, which really isn’t useful – except for the separately available shell refill pack and rail attachment. It’s worth purchasing if you want to expand your capacity, but it’s really the only attachment that’s useful in this situation.

Finally, there’s also a couple fun quirk of the barrel setup – you can reload the shells with darts while they’re inserted, if you’re scavenging darts off the ground. Since each dart has its own safety valve/air restrictor, you could even choose to fire one or two darts, should you need to simply get a shot off. 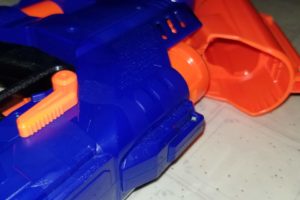 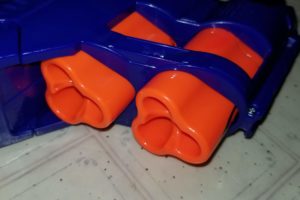 As a small pistol, there’s only so much power you can get for three darts. With the included Elite darts, the group averaged 45fps. Speeds increased slightly for two darts and one dart, respectively. Practice makes perfect when it comes to reloading, though. You can fire once every three seconds, if you do it quickly and cleanly. As a shotgun blaster that uses shells, the Shellstrike very much demands getting a good hit so that you can find the time to reload.

The Shellstrike is simple on the inside. However, it’s also limited in how much abuse the stock parts can take. The plunger rod is relatively thin, and the plastic on the plunger head that catches the sear is relatively thin. As a result, spring replacements are largely out of the question, not without a serious overhaul.

Whether you need to, of course, is another matter. Being a small pistol you can carry on the side, it’s perfectly suited for close quarters, with Elite darts giving a decent spread. I’d argue it serves a different purpose besides “as much power as you can pack into it”.

Secondaries aren’t my cup of tea, but that’s the purpose this blaster fulfills. It gives a short range spread of darts for when you really want to take out the person in front of you – or when you don’t have time to reload your main blaster. The rating shown is my opinion, but if you really enjoy your shotgun blasters and shells, you’ll already be buying this.

After all, even if I can’t personally find a use for this…shells are fun!