Since its release, the Nerf Epic Pranks app has seen millions of downloads. Granted, it’s a game that can at least hold your attention for a limited time, but it released with a lack of replay value after completing all the levels.

As of a recent update, that issue has been somewhat mitigated. However, there was also another, far more annoying change in the game: the addition of a subscription model. And the benefits don’t seem that great, all things considered. Here’s a quick peek.

BECOME A VIP! AND PAY FOR IT! 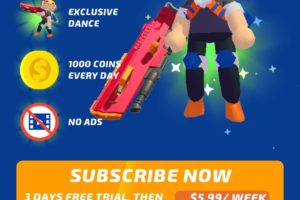 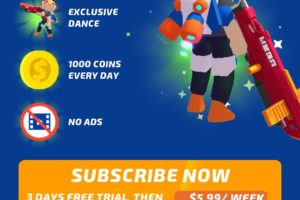 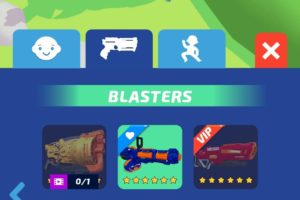 First, the most notable change is the starting screen. After the app loads, it advertises the new VIP subscription. You can do a three day free trial, but after that, you automatically start the weekly option. You can also go monthly for $20, or yearly for $100. The benefits? An exclusive character and emote, higher coin payout for each day you play, use of VIP blasters (as they get added)…and no mandatory ads. Note the last one was already an option, along with buying the Titan. Those two options are still there.

Also note that brand new downloads will see slightly different menus – I can see “Coming Soon” slots for later updates, but on a brand new device, blasters/characters/emotes were arranged differently, without any of those empty slots showing.

In all reality, if you’re already paying the tiny fee for no ads or a Titan, there’s absolutely no reason to get the VIP package. At the rate you normally earn coins, you already end up with an excess of them in a short amount of time. The VIP blaster isn’t any stronger than the Titan – or the later blasters you can work up to, for that matter. And do the character and emote really matter that much? This just seems like it’s tempting kids to hit the purchase button on their phone (or their parents’ phones) to spend money. Possibly a lot of money. And with how little it actually adds, it’s not worth it. Yes, buying cosmetic skins and other things isn’t anything new. But for a single player game, where you’re not even showing off to others? Come on…

The other issue that has been addressed is replay value. Originally, you cycled through missions again after completing them all. Now, you still do that, but more of your targets become “bullet sponges”. There will be people with boosted hit points, and it’s not uncommon to see 60, 80, or sometimes even 100 HP targets. The people that look around to find you and chase you off will also look faster, and focus on you even faster when they see you, leaving less room for error. Even so, it’s not that hard. By that point, you’ve unlocked the highest tier blasters, and having to duck one or two extra times just doesn’t make it better. I appreciate the thought, but it seems like many more things need to happen, like making enemy darts travel faster, instead of just boosting the hit points. All that does is make the encounter longer.

I’ll have to amend the earlier review to reflect the additions, but I’m still leaning towards not worrying about the game. At most, the “increased difficulty” just results in you taking longer to finish an easy mission (although people spotting you faster was a good idea). However, being that this is a single-player game, the subscription just doesn’t add anything of real value, since you can already earn things at a fast pace anyway. And it’s not like you can slow down the current rate of earning upgrades without REALLY annoying people. If you’re gonna play just to pass the time on occasion, don’t worry about buying. And make sure the kids don’t buy it for you.