First, credit where due: the videos were first noticed by u/Echo1201. I keep forgetting that Xshot has a Vimeo channel, so I guess I’m late by two weeks!

In any case, several things that were shown off at Toy Fair are now official in terms of being public. The Crusher is new and already documented, but the Dino Attack blasters weren’t yet publicized. 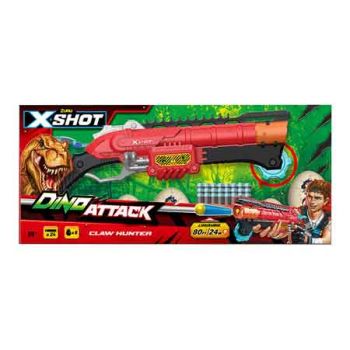 The Dino Attack video shows off the inflatable T-Rex target, as well as restyled Reflex and Eliminator blasters that feature dart storage, egg targets, and other neat touches. The Quick Slide is a Bug Attack Swarm Seeker, but now in regular white and blue colors. The Gold Chaos blasters have already been well documented by those who could attend the Toy Fair booth. The same applies to the Crusher, as well!

Meanwhile, we’ve seen most of the Fast Fill soakers by now, but there’s now also a Nano blaster in the line. It reloads using a slide-action mechanism to open up the reservoir – it’s funny how well the smaller blasters of the line should lend themselves to cosplay purposes.