Dart Zone seems to like surprising us with new blasters. In this case, it’s not totally new, but it’s a great upgrade to an already stellar blaster. The original Dart Zone Magnum Superdrum was a $20 pistol with a forty-round drum feeding it (later versions made it removable); it also featured slam-fire and an awkward arm brace. Now we have the X2, which features not only a new angled foregrip, but a real, extendable stock and a redesigned drum. And it’s still the same price, exclusively at Target. 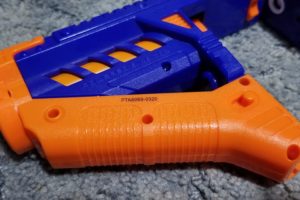 The overall layout of the blaster is the same, albeit with some obvious design changes. Gone is the loosely swinging arm brace; in its place is an adjustable stock that locks in place. Eight different positions makes it easy to find a length that works for the user. Likewise, the pistol platform has been modified up front, with a new angled foregrip. Both these things make for a steadier platform, that’s much easier to aim down range. Previously, many users just removed the arm brace and ran it as a light primary for events like Humans v Zombies. Now, we might see more serious users, thanks to the upgrades.

In addition to the body redesign, the drum and retention mechanism are new. Do note that there is no compatibility with the old version (old drums are still available on the Dart Zone website as of this post, though not for much longer). Posts on the front and back of the drum extend out, and can be pushed back for storage. Those posts line up with slots in the shell, and snap into place. To remove the drum, push a tab at the bottom of the foregrip forward, and then pull the drum out.

Finally, there are nice flourishes throughout the body of the blaster. Barrel cutouts, the usual “Powered by PT-DZ” that appears on Prime Time Toys’ various blasters these days…and “X-62965”? I have no idea what this is in reference to. M-2 on the side makes sense for Magnum 2, but this? That’s a fun mystery. It doesn’t match the item number (6388) or any part of the UPC.

As stated above, the Magnum X2 is much easier to aim and control, thanks to the stock and foregrip. Whether used as a pistol or as a primary, it’s easy to place shots. Of course, if you’re using the stock, then slam-fire becomes far more accurate than in the previous version. Having that point of support makes life dramatically easier.

Note that the grip, while fully enclosed, is quite large, and most hands should be able to use it comfortably. In addition, even when fully collapsed, the stock doesn’t feel in the way of holding the blaster. If anything, it makes for a better arm brace than the previous version.

Finally, the slide is tremendously easy to grip, even with sweaty hands. Which helps in priming the somewhat strong spring. The drum rotates on the priming motion.

Single fire, my Magnum X2 is averaging 80fps. I haven’t been able to accurately chronograph the slam-fire yet (and will clarify), but when firing angled shots, I average about ten feet less in distance. 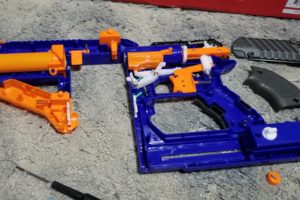 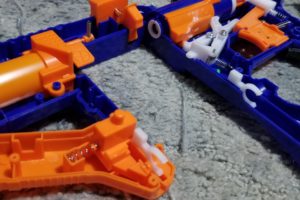 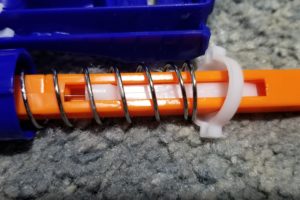 Underside of plunger, showing the protrusion that sits behind the main catch, or is pressed upward by the slam-fire mechanism.

Why does slam-fire have less power? It’s due to the way the plunger system is set up. The plunger rod has a white length of plastic inside, mounted on a swivel and spring-loaded. Depending on the firing mode used, either the main sear will catch in front of it, or a secondary one will press on a protrusion; this moves it enough to disengage from the priming slide and release the plunger. It does seem to allow slightly less travel, though, leading to the difference in range.

For reference, it’s a 27mm diameter plunger, the same as the last version.

The Magnum X2 is an unexpected but welcome update to a great platform. Easier use while still allowing for both massive capacity and reloading on the fly? That’s great for scavenging-style play. Whenever Humans v Zombies finally starts up again, I’ll be sure to use this for at least a few missions. After all, with options like these, who needs magazines?