The Rival Edge series is a sub-line aimed (pun intended) at target practice, as opposed to team combat. The previous entries (also Walmart exclusives) were bolt-action blasters that came with moving targets. This year, Hasbro took cues from trap shooting for the blaster, producing a long, pump-action toy. The included target, meanwhile, borrows from steel flip targets. The end result is a great package for just $40 – but full enjoyment may require long arms.

The blaster, when fully assembled (the stock snaps in place) is 32 inches. That’s a long blaster. With the pump grip oriented all the way forward, it makes it unwieldy to use without long arms. I can use it just fine, with a thumb and finger wrapped around the front of the grip. Shorter arms may not be able to do that, and while the faux wood molding and indents does provide some gripping surface…it can still get slippery with sweaty hands. In that respect, it’s like the grip on the Takedown…but placed much farther forward. I can foresee many modders replacing the grip before using the Saturn in foam combat.

Pump grip aside, the Saturn is a fine looking and handling blaster. The faux wood stock and pump grip make an interesting contrast with the neon green body. The stock is plenty adequate, with the main grip being comfortable. A rail runs along the top of the blaster, with a space for the feeding port.

The Saturn holds ten rounds, like the Jupiter before it. Priming the blaster opens up the breech, and pushing the pump grip forward closes the breech while loading a ball for firing. The usual Rival trappings are here – safety switch, stiff spring, hop-up tab in the barrel. The blaster feels great and operates smoothly, but it operates best with longer arms.

The Saturn averaged 94fps in testing, with the included Rival ammo. Thanks to the included slam-fire, you can manage to fire at a rate of 2.5 balls per second. Of course, if you’re doing target practice, you don’t NEED to fire that fast. But the option is nice!

No one was expecting a fancy target, but Hasbro was clever this time in changing things up. The last two entries were targets on pedestals – this time, we have several pieces that slide together to form a flip target. Hit the target, and it flips backwards. Keep hitting the target, and it will keep flipping. I’ve done this before with the real thing, and the Nerf version works just as well.

It’s not an expensive thing, by any means, and it’s probably the reason why this package is $10 cheaper than the Jupiter. But it works! 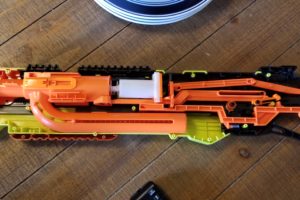 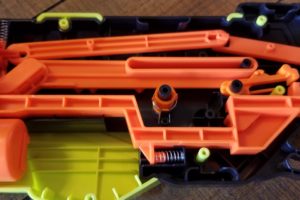 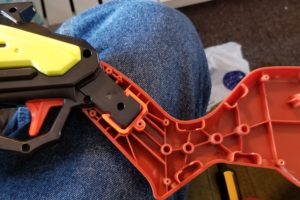 The internals are what you’d expect from a Kronos derivative. ALMOST. Due to the lengthened body, several parts are stretched out compared to other blasters. For example, the ratchet that prevents partial priming sits much farther back, instead of under the plunger tube. Long pieces of plastic have to connect the trigger, and several others are needed for the priming indicator.

The Rival Edge Saturn is a fun blaster that, while combat-capable, is fine for anyone who wants to just do some target practice. Do be warned, however, that it’s far easier to use if you have longer arms. The Takedown, at half the price, may be better suited for team play, but the Saturn is fun in its own right.