Ultra. The line has yet to really stand out from the crowd in ways beyond ammo cost and incompatibility – while you can launch the darts at high speed, the accuracy still has much to be desired when compared to other dart types. The Ultra Five, as a mag-fed pistol, had the opportunity to impress in the way the Magnus did for Mega. But between firing problems and the usual issues, I can’t give a good recommendation.

The Ultra Five has an internal magazine that opens when you pull back the priming slide. It’s quite a long prime to get there – with a strong spring inside, it’s necessary (see internals). It also takes more time to load than other internal-magazine blasters. Remember that little nub on the back of Ultra darts that gets used in all the safeties and “Dart DRM”? You have to maneuver that past the front of the breech, which can be slower than you’d like in the heat of battle.

Once loaded, the blaster holds four darts, and you can close the slide to fire. Prime, fire, repeat. In that sense, it’s nothing new.

One tactical rail sits on the slide. The barrel simply consists of an orange protrusion, and I assume it’s just there to distinguish the blaster from weaker, overseas models that lack it.

The handle, like previous Ultra blasters, continues to somehow be too narrow in the x axis, but too wide in the y. The giant trigger guard is simply there for style, and does nothing. Larger hands will want to simply remove it, but for the rest of us, it isn’t horrible. The trigger area itself is a bit limited, however.

With the included darts, my Ultra Fives (I got two) averaged 104fps in testing – nothing to sneeze at, and more than enough to hit those 120′ ranges at an angle. Accuracy didn’t seem to change from other Ultra blasters. Rate of fire is somewhat slow, due to the incredibly long priming motion – at best I could do 1.5 darts per second.

This was a blaster I wanted to try out in battle before making a final determination, and I’m glad I did. Using a mix of old and new darts, regular and Sonic Screamers, I had lots of misfires in addition to needing many shots to hit at range.

It would appear that, even with darts loaded correctly, sometimes darts do not fully seat into the barrel. I’m not sure if this is because of darts being worn, tolerances in dart manufacturing, or some other factor. I do know the rear nubs were intact. Even so, the misfiring darts weren’t sitting back far enough for those nubs to engage the air release valve. Thus, I had many frustrations with pulling a trigger and seeing nothing exit the barrel. 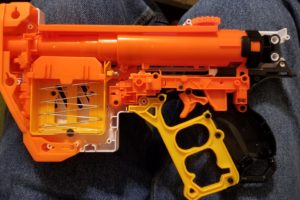 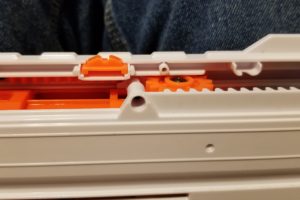 The main point of interest, after opening the blaster up, is how it fits everything inside. The spring is quite stiff, making a geared priming system necessary. Since it’s a small pistol, however, the designers put the gear train flat, underneath the priming slide.

In testing, the Ultra Five seemed fine. In real use, however, it was a letdown. Handle comfort (or lack thereof) could be ignored for other factors, but the slow rate of fire and the large number of misfires became frustrating in battle. Not to mention the usual Accuracy issues of Ultra darts dodging your target. And I’ve had issues with both of the Ultra Fives I bought.

If you need an internal-mag pistol, there are simply better options.