When it was first introduced at Toy Fair 2020, Buzz Bee was unable to get the Rebel Mech prototype to the US due to pandemic issues. Since then, the base functions have changed. Originally, it was advertised as a full-auto blaster; whether due to engineering issues, changing price margins, or Walmart desires, it’s now a semi-auto blaster. This change, however, not only still gives us a competent blaster (and massive capacity) for $25, it also gives us one of the most mod-friendly electric blasters to date. One friendly enough that I paused reviewing things in order to design replacement cages!

Historically, Buzz Bee does not make the best blaster handles, with many of them undersized for all but small children’s hands. In this case, however, the handle is actually long enough to fit most adult hands, as well. It’s still on the thin side, but it’s serviceable. There’s another hidden benefit, as well, to the thin handle: it’s easy to move your thumb up to toggle the on/off switch.

Yep, there’s no rev trigger on this blaster. Instead there’s a toggle for turning the blaster on and off. Given the nature of the switch, however, it’s easier to use with your dominant hand than some Dart Zone designs that have also appeared on Walmart shelves. Ultimately, while the “rev trigger” concept is nice, it’s not necessary. In the case of an easy to operate blaster like this, it becomes more of a style preference.

The Rebel Mech is a rather long blaster (as long as a Nexus Pro without the stock or buffer tube). As such, it’s not going to be a sidearm. The front grip, while far forward and thin, also works. Unless you’re trying to use something like the 50 dart Titan drum, you’ll be able to use it comfortable without hitting your magazine.

The blaster itself is very wide in the middle, and includes what appears to be a leftover from the original design. There’s a blue door at the top of the blaster which opens to a large cavity, and pulls on a plastic safety linkage to disconnect power. I suspect this is a remnant from the original full-auto design, for clearing jams or some other use.

The shell is sturdy, with lots of molded detail, and quite frankly the plastic feels better than any Buzz Bee blaster I’ve ever handled.

The four AA batteries go in the back of the blaster. Undoing the top screw lets you flip open the green battery cover. Swing the cover back down and secure it, and you’re good to go. 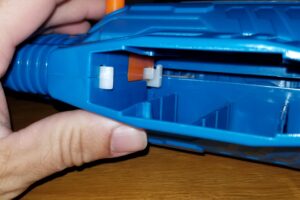 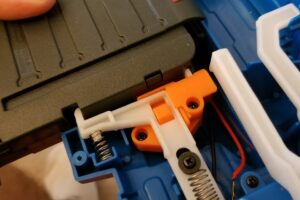 The Rebel Mech shoots quite well; the included darts averaged 81fps and could be fired as fast as 4 darts per second, with the magazine keeping pace. The range claims of 100′ are technically true, going by the industry standard of “aim up into the air and fire”. However, the included darts are Buzz Bee’s “Long Distance” darts, which are light but suffer in accuracy. Firing Adventure Force waffle darts only loses a few fps.

The Rebel Mech, while I’ve tried to avoid judging it based on mod potential…quite possibly has the best mod potential of any full dart flywheeler this year. Thanks to the change in design to a simple semi-auto blaster, there’s now a lot of room above the magazine well for stuffing an aftermarket battery.

The rear of the blaster has several linkages. The pusher mechanism that connects to the trigger is obvious. Out side of that, the large circular piece by the electrical contacts is part of the on/off switch. It mates with ridges in the shell to index on and off. It also has small protrusions above and below the main circular shape; these get pushed out of the way by the two safety linkages from the blue door and magazine release to cut off power. 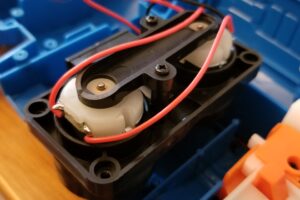 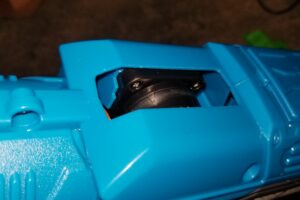 Up front, the flywheel cage is rather simple in shape, but is again surrounded by a LOT of empty space. There’s plenty of room for new motors, generally all aftermarket flywheels, and new wiring. I’ve already gone ahead and posted replacement cages on Thingiverse.

It still leaves those contacts as the weak point in a modded blaster, but that’s a small obstacle for making a rather powerful blaster from a $25 item at Walmart.

Even without the modification potential, the Rebel Mech is a solid blaster. The shell and handle are far better than the usual Buzz Bee fare, the performance is great, and the capacity of a fast-feeding 30 dart drum simply enhances the package. The lack of a rev trigger might annoy die-hard Nerfers, but the overall package is nothing to sneeze at for just $25. This one is a must-buy.