The Stryfe is possibly the most prolific blaster of the modern era of Nerf. It’s seen several iterations and variations since its debut in the NStrike Elite line, and is also one of the most commonly modified blasters out there. The Elite 2.0 line brings about a replacement for it, the Phoenix, featuring a chunky design and even more tactical accessory possibilities. But should you get it over past versions? Maybe not. Better blasters are already on the market, and if your intentions happen to include modification…you’re going to be disappointed.

The Phoenix has a more aggressive (and symmetrical) look than its predecessor, but it’s one I actually like. Part of this is due to the external design, of course – when you’re adding tactical rails everywhere (two on top, two on the sides, and one below), you need plastic to mount them. There’s also another reason: since the pusher mechanism is simplified like the Nerf Alpha Strike Flyte (see the internals at the end), but takes more physical volume, the only realistic space for batteries is in the front. That’s not a bad thing, but it does show how cutting costs can conflict with and limit design choices. Unless you want a bulge somewhere using plastic, or you choose screwing together a compact design, the battery space has to go up front.

Even so, the Phoenix remains one of the best looking in the Elite 2.0 line. It makes the most of the design motif, both in molding and in color placement.

The handle is adequate, but still a downgrade from the NStrike Elite parentage. It also operates as you’d expect, with a rev trigger turning on the motors, and the main trigger pushing darts forward. It does, however, feel like you’re smashing the rev trigger before the motors turn on. Additionally, the magazine release (sitting in front of the main trigger) is terrible to use, taking lots of force to actually move the retention tab out of the way. As an adult pressing my trigger finger forward, it’s annoying. For a kid, that’s simply unacceptable. If it hurts to use a blaster, it’s not user friendly.

The blaster does come with one accessory, a scope. It’s purely decorative and for pretend play, seeing as it doesn’t really help with aiming. Of course, the accessories are there to look cool and kids playing with the blasters anyway! It’s still a nice touch and goes well with the blaster. And it looks good on the other Elite 2.0 blasters, as well!

The jam door is made of a similarly flimsy design as that of the Flyte. I don’t expect it to live long if the user/child opens and closes it a lot.

Even with the cost cutting measures, the blaster shell itself feels solid, with the off hand supporting the battery weight. At the very least, even with the handle and button issues, the Phoenix feels nice in two hands. One handed use, while possible, feels front heavy compared to a Stryfe.

I averaged 67fps with the included darts – it’s around the low end what you’d expect with Elite darts, and other Pheonix blasters could shoot a little higher. I could also shoot three darts per second – the pusher mechanism may not feel quite as smooth as other Stryfe variants, but it still works just fine. Just be aware that darts speeds will (as usual) dip when you try to fire off darts that rapidly.

This is the part where I get more subjective in my personal opinion. I try my best to not let modification potential influence the score, seeing as we try to review things as you’d find them on shelves (or the online equivalent). To that end, when things like the Rebel Mech exist at the same price point, the Phoenix still seems like less of a good deal.

However, the tinkerer in me is completely frustrated at the clamshell design of the Phoenix. There are a few necessary screws, but beyond those, the shell clips together or has posts solvent welded together. I bought a second Phoenix just for disassembly, and ended up having to destroy it in order to document everything. 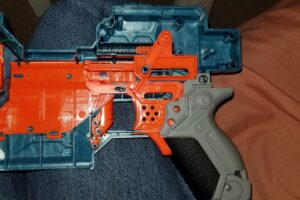 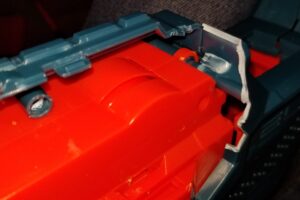 Two posts are bound together on top, one under the tac rail, and one behind. 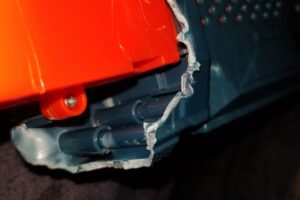 Two posts stuck together behind the bottom tac rail. 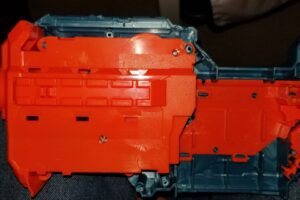 The reverse of the orange box. The tiny hole up top is the rear of a motor shaft! 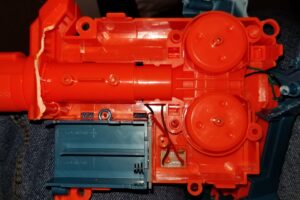 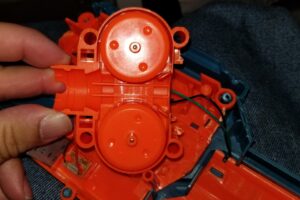 The flywheel cage, which isn't meant to be unclipped. 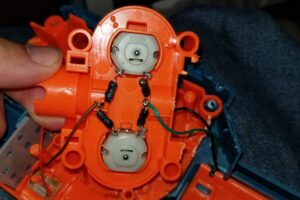 Rear of the cage. Remember, this fits so tightly together that the rear of the top shaft sticks through the orange box.

The rear of the blaster looks similar to the Flyte, with one long compression spring taking up space (and helping force the batteries to the front). The shell around it came unclipped fairly easily (took effort, but was doable).

That’s some melted plastic right there, where the barrel meets the main box…

The front of the blue panels (above and below the orange middle) could be persuaded to come unclipped, but four posts in the middle appear to be solvent-welded together. I gave up on coaxing them apart. Underneath it all, you find that the orange “mouth” on the blaster is actually its own box, containing the guts!

Some clips (and three screws) come undone there, but the barrel attachment point and associated plastic are solvent welded together. Thus, under normal circumstances, you WILL NOT have realistic access to the internals. Even if you did, they’re fit so tightly together that there’s even a hole in the orange box for the rear of one of the toy motor shafts! There’s no realistic way of replacing the internals, and the flywheel cage is tightly clipped in place and not meant to be removed (doing so damages the clips). If your goal is to modify a blaster, this is 100% NOT the blaster you should be buying.

Yep, it’s been a struggle trying to compartmentalize things while reviewing this blaster. Hopefully I’ve been fair.

$25 buys you a basic, semi-auto flywheel blaster with a toy scope and a six shot magazine. It has the basic Nerf performance you’d expect, and enough tactical rails to customize any way you want. However, between some user friendliness issues at the controls and the fact that better-performing items are on the shelf beside it, recommending it is hard. It LOOKS great, I’ll grant you that, and in two hands feels great (one-handed is front-heavy). And if you and/or your kid values basic customization with Nerf accessories, you won’t be disappointed. But like the Rebel Mech shows, that $25 can go farther.

And all of this ignores the fact that, for all intents and purposes, you cannot modify the blaster to make it better. Hasbro took the cost-saving Alpha Strike assembly lessons to the next level with Elite 2.0, and in doing so has essentially closed off the internals to everyone. Granted, they’re a toy manufacturer, so being able to modify toys isn’t even a thing for them to be concerned about. But for the dedicated and eclectic group of Nerf modders and players out there, it does mean that there’s no reason to buy this blaster unless you really like the aesthetics or want a stock blaster for that express purpose.