Earlier this year, Hasbro showed off the Ghoulgrinder at Toy Fair 2020. It’s a little expensive for its functionality (ten dart rotating cylinder and Elite ranges). However, it also fits the current Zombie Strike aesthetic perfectly. So if your personal play fantasy is surviving the zombie apocalypse, the Ghoulgrinder works perfectly. And you might have a little fun on the way!

The Zombie Strike line has evolved from simple reissues of blasters (Magnus, etc) to complex shells, detailing various tools and parts cobbled together. In the case of the Ghoulgrinder, it’s quite literally a grinder that’s been retooled to fire darts. The front handle primes the blaster, a rear grip and trigger have been thrown on the bottom, and a stock attachment point has been added (complete with new stock!). A barrel attachment lug is also present.

Priming the blaster is quite easy, but it’s also only designed for right-handed individuals. The priming handle (which is removable) only goes in the left side, for use by the off hand. Given the overall design (and the right-handedness of the population in general), it’s understandable. There’s a noticeable *ca-thunk* in the motion, seeing as priming not only compresses the internal spring, but indexes the faux grinding wheel to the next barrel. There isn’t a front grip per se, but the wheel guard on the grinding wheel covers the bottom of the shell and suffices.

The top of the blaster features a single tactical rail (of questionable usefulness behind said wheel guard) and five dart holders for quick reloading. The grinding wheel is actually fairly easy to move by hand, so reloading is better than expected – even if the blaster can reload half the barrels.

I should note that due to the priming handle placement (close to the main handle), that leaves a lot of mass up front to possibly swing, so you’ll have to adjust your aim accordingly. The main handle is large and comfortable, fitting the hand nicely, and the trigger feels great as well. The plastic shell has the high quality you should expect from a company like Hasbro.

I averaged 66fps with the ten included darts, and a rate of fire of three darts every two seconds. It’s not the highest performance blaster in the world, but it is satisfying to use.

The Ghoulgrinder has quite a few screws to take out before accessing the internals, and even more to fully disassemble the blaster. 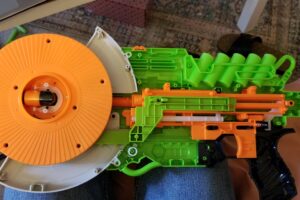 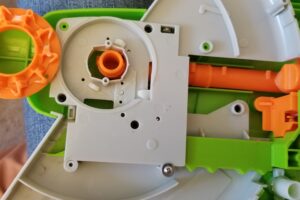 After removing the wheel. 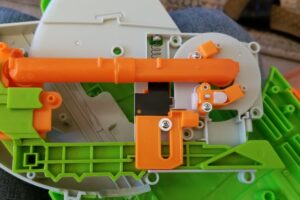 The core of the blaster, seen from the other side.

Aside from the extended air path needed for connecting the wheel to the plunger (and the fun rotation mechanism), the power plant is similar to that of a Strongarm or Surgefire. A plastic sled pushes the plunger back, and most of the frame and parts snap together. As such, I don’t see this as a blaster you’d ever really upgrade. It’s more concerned with the pretend play factor, anyway – being an Elite-level blaster is extra icing on the cake.

Zombie Strike blasters aren’t for everyone. Die hard users looking solely for performance can probably skip this blaster. But if you’re just looking for fun, or to add something to your zombie-slaying fantasies, having a grinder-turned-blaster might fit the bill. To that end, it’s fun to use, and shoots decently to boot.

Besides, are there really ANY other blasters like these on the market?