Nerf has been on a roll, in terms of securing IP crossovers. Overwatch Rival blasters, Fortnite blasters, and now Halo. Just as important, however, is nailing the landing once the product lines start appearing. In that regard, the MA40 largely does the job, being both a nice prop for Halo fans and a good platform for blaster fans. Quibbles over magazine compatibility aside, it’s worth grabbing, even at the $50 MSRP.

The MA40 is stylized after the in-game weapon from the upcoming Halo: Infinite video game. As a result, the blaster is, essentially, a Rayven with a large amount of plastic up front. Those of you who have used Rayvens will know what to expect. For everyone else, just read on!

The MA40 comes in at over two feet long – quite a bit of plastic. Even so, it never feels unwieldy to use. As a bullpup blaster (action sitting behind the trigger), the stock length is ample enough for comfort, due to the need to accommodate the magazine, pusher, and other associated mechanisms. The front handle is quite long and comfortable for hands (and arm lengths) of any size. The main handle is serviceable for most hands, with plenty of clearance for the thumb. The trigger action itself feels somewhat smoother than that of a Rayven.

The cheek rest pulls double duty as the jam door; I have yet to actually experience any jams in this blaster, however.

Up front, the blaster takes 4 “C” batteries, all in a row above the grip. In addition to fitting within the confines of the blaster, it also helps keep it balanced. The blaster doesn’t feel front heavy as a result of the battery tray placement.

Two attachments come with the MA40. One is a faux ammo counter that fits the shape of the in-game weapon. The other is a white rail riser, allowing the use of attachments like scopes that otherwise would not clear the front of the blaster. Using the rail riser is a bit wobbly, but the option to use other things is appreciated.

The included magazine fits ten darts (the included ones are also green and white) and has extra plastic to complete the look of the blaster. Any stick magazine should work in the MA40, but drums will not due to extra plastic on either side of the magazine well. It’s unfortunate, but understandable given the nature of making prop blasters.

Like most semi-auto blasters, you first depress the rev trigger to spin up the flywheels, then pull the main trigger. This fires a single dart. When you’re out of ammo, pressing the (ambidextrous) magazine release lets you pull out the magazine. The placement of the release buttons on the sides of the stock is a bit awkward for gameplay use. For emulating the video game reload, however, it’s easy to tilt the blaster up, reach under the mag, hit the button with your fifth finger, and pull out the magazine.

In spite of the super long barrel, darts averaged 72fps at the muzzle in testing. In addition, it was easy to fire four darts per second (albeit with diminishing velocity). 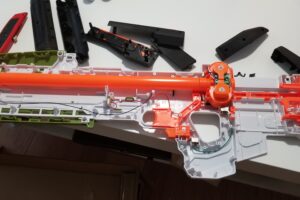 The MA40 has the same basic semi-auto wiring setup you’ve come to expect from Nerf. Rev trigger, magazine safety switch, jam door safety, etc. The flywheel cage appears to be the same as that of the Revoltinator – a different design from that of the most commonly used flywheel cages. If you’re wanting to mod the blaster, I have some 3d printed cages on Thingiverse you can try; those will be tweaked a little after some feedback from other people!

For kicking off the Hasbro/Halo collaboration, the MA40 is a stellar beginning. It may just be a “Rayven reshell”, but it works well and accurately portrays the in-game weapon. As both a blaster and a collector’s item for Halo fans, it works. Go ahead and grab one!