Is there a reason for this thing to exist? Alpha Strike is supposed to provide basic, inexpensive blasters, but this takes the idea to a new extreme. It’s a Jolt without a trigger; you simply slam the plunger rod with your off hand to fire. Could it be fun for some kids? I imagine so. But when you can simply buy a Jolt or equivalent blaster for a similar price, and have both a trigger and nothing throwing off your aim…this seems odd at best, unnecessary at most. 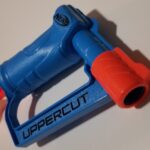 The Uppercut is named for a rather obvious reason; to fire, you’re essentially doing that action. Your dominant hand holds the blaster, and the off hand pushes the plunger rod up at a rapid pace (doing it softly won’t fire). Think of it like the dart equivalent of firing a Demolisher rocket from one of the various missile launchers.

This, of course, produces problems for the task of targeting anything at all. You’re trying to aim, but at the same time you’re pushing part of the blaster upward. It can be done, of course, but it’s a challenge. And while I’ve been able to get velocities above 70fps (and averaging 65), that’s largely going to vary from user to user.

In terms of construction, it’s a body, cushioning spring, plunger, and end cap. The end cap can in theory be pushed sideways to release the plunger. I, however, wasn’t that patient. I’m okay destroying a $3.25 blaster for science.

It’s a funny blaster, to be sure.

It’s an inexpensive blaster, sure (I found it at Five Below). But considering you can get a Jolt (or, if you want the same blaster line, the Alpha Strike Stinger) for the same price or cheaper, and have the addition of an actual trigger, there’s not much point to this blaster. Maybe just for laughs?