Author’s note: thank you, Zing Toys, for the free sample!

Sometimes as an influencer, you drop the ball. In my case, between moving, getting engaged, and life in general, I’ve had items from Zing sitting in a box for far too long. Which is unfortunate, because the Marshmallow Extreme Blaster is a ton of fun, far surpassing the range claims on the box. You could say it’s a…sweet package.

To be clear, I’ve reviewed this blaster before. Marshmallow blasters aren’t new to the world of Nerf. In fact, my 5th(?) blaster I ever modified was an original model Marshmallow Blaster; I added a brass breech for firing half length darts and sold it to a young player in Canada. The Extreme Blaster improved on that design, with less dead space between the tank valve and ammo, as well as a neat break-action barrel. 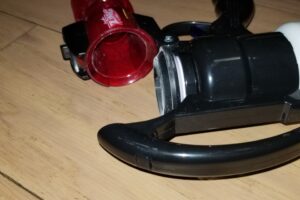 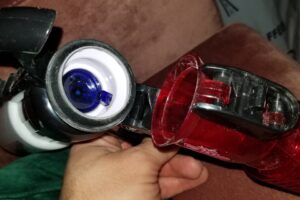 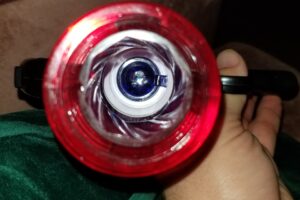 The barrel opens via a simple button on top of the carry handle. Once open, you simply shove a large marshmallow into the rifled barrel and close it again. Pump the rear handle about ten times, then pull the trigger.

The tank mechanism is fairly simple. On the pump side, the pump doesn’t extend quite all the way inside its tube. The leftover dead space means that there’s an inherent limit to the pressure that can be built up – it acts as the safety mechanism. Meanwhile, the front of the tank has a spring-loaded check valve, which is held in place by the sear until the trigger is pulled.

Being geared towards children, the main handle is definitely on the small side. However, that’s the only real annoyance. Pumping the blaster is easily done just by putting one hand around the barrel, and the other on the pump handle.

I will say, I’m enjoying the bright packaging and new colors. The old red and blue color scheme was nice, but mixing in the black and the translucent plastic in the barrel, trigger, and pump shaft makes for a pretty specimen.

The check valve, as seen from inside,

As expected, the Extreme Blaster isn’t going to have the highest rate of fire. At best, you’re taking about ten seconds between individual shots. However, the speeds you get are impressive; it’s enough to propel a 7g marshmallow at 76fps average with ten pumps. And with an angle, it’s more than enough power to audibly hit my back fence from my door (about 75′ distance). So 40′ is an understatement, at least when it comes to adult arms pumping the blaster. 40′ ay be more reasonable with children in mind.

And of course, this doesn’t even begin to cover what can be done with Nerf darts…I’ll let this 3d printed item from donutcat give you some ideas.

$25 buys you quite a bit when it comes to Marshmallow blasting. I’m quite happy that Zing has not only acquired the brand, but is throwing their support behind it with updated color schemes and well-made blasters. Hopefully, we’ll see some classics (Crossbow, Rapid Fire Blaster) as well as fun new ideas for the future! In the meantime, however, launch some large Marshmallows at targets. Or your friends!