Nerf crossovers vary in quality. There’s a balance between the looks/cosplay value and actual blaster function to consider. Some examples, like the Nerf Halo MA40, are a great blend of working blaster and semi-accurate prop. Others, like the Mangler, are a bit lacking.

The Mangler looks decent enough as a prop (brightly colored, of course, to show it’s a toy). However, it’s uncomfortable to use, and it clearly doesn’t use all the real estate to maximum effect. $20 is certainly affordable, but…I hoped for more.

For obvious reasons, Hasbro didn’t make a grey blaster. However, there are a few other major differences. In-game, the weapon holds eight rounds. In real life…it’s a Nerf Disruptor (six shots) with a plastic cowl covering all of the unused space. The cowl has molding to make it look like there are eight rounds…but you only get six. One side also flips out for loading the cylinder, even though doing so doesn’t actually open up any barrels for loading. I realize that more plastic is more cost, but would it really hurt the bottom line that much to make the ammo count match when there’s clearly space? You don’t even need to make the cylinder that much larger to hold eight rounds, while still having a cowl.

The blaster primes via a rod on top of the blaster. Given the in-game model, having a large slide would stand out. Even so, the current method is just adequate, and sweaty hands make it harder to operate without slipping. 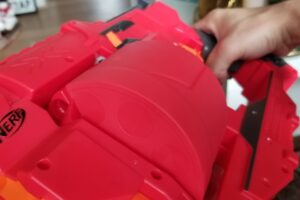 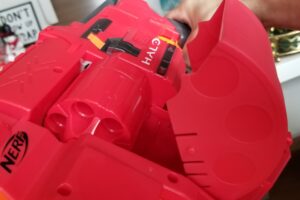 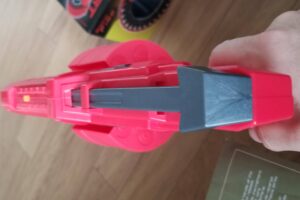 The handle, meanwhile…feels cramped. Especially when the trigger is shaped such that pressing it is likely to pinch your middle finger. Small hands may have room, but larger ones will find the last few fingers cramped.

Finally, the “melee” portion of the blaster is hard plastic. I realize that, as a toy company, they aren’t encouraging you to use the blaster like you would in game. But in reality…people will. It would make better sense to at least have a bit of foam coating the “blades” for safety, even if it meant a few more dollars on the price. It’s a Nerf toy, most consumers would understand.

If there is one saving grace, it’s that the blaster is up to Elite standards, averaging 72fps. I can fire roughly two darts per second with it.

As previously stated, the blaster is essentially a Disruptor in a new body. Granted, there is no slamfire mechanism, but the basic platform remains. Given how much spare there would be to expand capacity…it’s still a bit disappointing.

The Mangler is decent enough as a prop, but there are far better ways to spend money when it comes to just getting a blaster. Given the comfort issues and the decision to not match the in-game weapon’s capacity, even when there’s clearly room to do so, it seems like this crossover item is a cheap attempt compared to the MA40. $20 is better spent elsewhere,