The Nerf enthusiast community has given the Ultra line plenty of grief. Between wonky ergonomics, darts (and blasters) that didn’t always live up to the original claims, and the expense of the darts, it isnt the most attractive option compared to other blaster lines. And yet, somehow, I’m starting to grow fond of the Ultra Three.

Between a decent capacity, on-board dart storage, and plenty of power, the Ultra Three is a nice blaster. Provided you’re invested in Ultra, of course.

Yep, that’s almost always the first comment about the shape of the blaster. The long blaster isn’t meant for shouldering, with the main grip in the rear and the pump handle (and magazine) out front. So while it’s decently balanced…it does look like an ax.

On my store-bought model, I didn’t have any issues in priming or handling the blaster, beyond the usual gripes about grips being too small. I also was unable to replicate some other reviewers in finding pinch points. However, long or fat fingers should still be wary about wrapping around the front of either grip. Especially the thumb on the front of the priming grip. 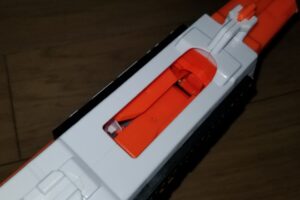 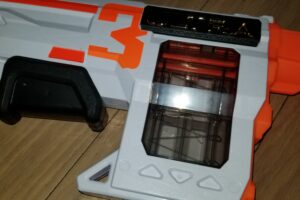 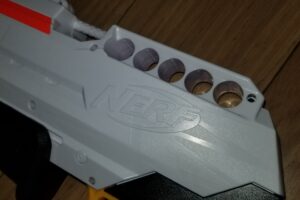 As per the usual, the gold ULTRA is only on one side.

The internal magazine holds eight rounds, and is easier to load than the Ultra Five. On that blaster, you also had to push the dart forward somewhat on insertion to clear the bolt/barrel. That motion isn’t eliminated on the Three, but it is reduced. Still, if you emptied your magazine, it will take a while to reload.

You can store five darts at the rear of the blaster.

The Ultra Three averages 104fps with Ultra darts, more than enough to clear the advertised 120′. The prime’s length does reduce your rate of fire, so expect one and a half darts per second.

As always Ultra is…okay on accuracy, compared to Elite darts, but far from the best out there.

The internals are largely what you’d expect; there’s a rather large plunger tube and a strong spring, along with a geared system to ease priming.

Sadly, no slamfire in this giant shell.

The Ultra Three has become a favorite oddball in my collection, especially with the Sonic Screamer darts. It shoots far, holds plenty of darts, and can be reloaded on the go fairly easily. It’s just a matter of whether you’re actually invested in Ultra or not.